Romelu Lukaku announced his arrival at Old Trafford by scoring twice on his Premier League debut for Manchester United as they embarrassed West Ham.

Jose Mourinho's team were a constant threat against a poor Hammers side, offering excitement and encouragement to their supporters on the opening weekend of the new Premier League season.

Lukaku, a £75m summer signing from Everton, put the Red Devils ahead with a rising drive off the post after racing onto Marcus Rashford's pass.

The Belgium international doubled the lead after half-time, glancing in a header from Henrikh Mkhitaryan's inswinging free-kick.

United teenager Rashford curled against the inside of Joe Hart's left-hand post before substitute Anthony Martial ended the match as a contest with a slick finish.

There was still time for a fourth, however, as Paul Pogba curled in from distance.

The Hammers offered little going forward in a passive performance, although new signing Marko Arnautovic did flick a header onto the top of the home crossbar at 2-0.

The Red Devils have now lost only one of their 14 opening-day Premier League fixtures at Old Trafford, while West Ham's season began with a record 11th defeat.

Stylish United set out their stall

Manchester United might have won the Europa League and League Cup in Mourinho's debut season at Old Trafford, but Red Devils supporters will be expecting, if not demanding, a serious title challenge after a less-than-adequate sixth-placed finish last term.

Although Mourinho's new-look side were outclassed by Real Madrid in Tuesday's Super Cup defeat, solace could be taken that the European champions contained a level of quality unlikely to be seen in the Premier League this season - and certainly not from their opening opponents.

In contrast to a workmanlike performance against Madrid, the home side played with verve and purpose as the Hammers sat back in a bid to contain and frustrate them.

It was a tactic that opponents used to successfully stifle Mourinho's side on several occasions at Old Trafford last season, but once Lukaku broke the deadlock the Hammers never looked like clawing their way back into the game.

Style is equally as important as substance for many United fans and their attacking approach - which saw them rack up 22 shots - will provide encouragement to supporters hoping for a first Premier League title since 2013.

United's striking future outshines its past

The opening weekend provided a tale of two strikers at Old Trafford: one a familiar face looking to haunt some old friends, the other a new arrival seeking to make an instant impression.

New Hammers signing Javier Hernandez received a warm welcome on his first return to the club where he made his name, but saw his appearance overshadowed by the latest man charged with firing the Red Devils to success.

Lukaku, who opened his account in Tuesday's defeat by Madrid, impressed throughout with his strong running, physical presence and link-up play.

But his two goals were what really caught the eye.

In truth, it seemed almost inevitable that the Belgian would find the net against the Hammers, having scored in nine of his 10 games against them while at Everton.

The 24-year-old eased any growing twitchiness - as United dominated the opening half an hour without testing Joe Hart - by smashing in the opener, then gave them valuable breathing space with a predatory header.

He had a chance to complete his hat-trick too, only to see Pablo Zabaleta block his goalbound shot with a sliding tackle and then blaze a rising effort over.

"When you play for Manchester United, you have a job to do and mine is to score goals. It is promising," said the former Everton and Chelsea striker. 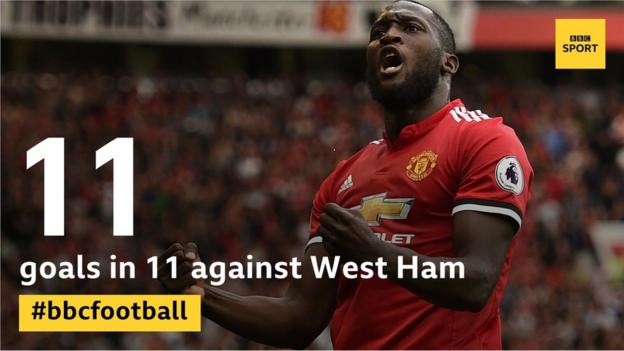 Optimism has been high at West Ham after a productive summer for manager Slaven Bilic - but some of that may have disappeared after they were easily brushed aside at Old Trafford.

Bilic said afterwards it was hard to find any positives, but one poor performance on the opening weekend does not mean the Hammers should necessarily panic, especially as several key players - including Manuel Lanzini, Andy Carroll and Michail Antonio - were missing through injury.

The Hammers' transfer policy over the summer has been clear: experienced internationals who have proven Premier League quality.

Right-back Zabaleta probably came out with the most credit after a typically industrious display.

But questions may be asked over the ease with which England keeper Hart allowed Pogba's strike to creep in, while Hernandez barely had a sniff of a chance against his former club.

The Hammers only had one serious chance in a limp first-half performance - Edimilson Fernandes's fierce shot parried by David De Gea in the final kick before half-time - before Arnautovic's half-chance after the break.

Manchester United will look to follow up this fine opening win when they go to Swansea on Saturday (12:30 BST).

West Ham face another away game - because their London Stadium has been hosting the World Athletics Championships - as they visit Southampton on the same day (15:00).