As an illustration of how quickly life can change in the Premiership, Mark Warburton was still in possession of his magic hat at Rangers this time last year. Mark McGhee was looking to build on a fifth-place finish at Motherwell, Paul Hartley, Lee Clark and Robbie Neilson were all thinking about how to improve their lot at Dundee, Kilmarnock and Hearts.

By the end of February, four of those managers had departed and a fifth, Hartley, went in April. Here we are in August and one has gone already.

Whatever its faults, Scottish football does not lack stories: good, bad and ugly. The best of it last season was Celtic's march into the history books, and their pursuit of a double treble begins on Saturday at home to troubled Hearts.

Brendan Rodgers will never engage with the notion in public, but such are the standards he sets he will surely be looking to follow one invincible season with another, a first treble with a second.

They've lost the wizardry of Patrick Roberts but have gained the Premiership machine that is Jonny Hayes. For now, Moussa Dembele remains - you'd have got decent odds on that - and they've splashed out for Olivier Ntcham, a physically imposing ball-player in midfield.

Another unbeaten domestic season seems improbable until you look at the squad that Rodgers has. Back-to-back invincibles? It can't happen, can it?

Aberdeen were 30 points behind them last season, but that's a bottom line that does Derek McInnes little justice. To tweak a line from Scooby Doo, if it wasn't for those pesky Hoops, Aberdeen would have secured a treble of their own.

After a terrific attempt at spoiling Celtic's treble party at Hampden in the Scottish Cup final, there were clouds over Pittodrie. Ryan Jack was on his way to Rangers, Niall McGinn was also heading out the door and they lost Hayes to Celtic soon after.

Hayes and McGinn have been totems for the Dons. Between them they got 19 league goals last season and 27 assists. Hayes has led the assist charts in the Premiership for the past two seasons. McGinn averaged more than a dozen goals in each of his five seasons at Aberdeen.

How do you replace those guys? McInnes looks to have done as good a job as was humanly, and financially, possible. Retaining Ryan Christie was huge. He averaged a goal every other game for the Dons when he joined on loan from Celtic - a potential star of the season.

Gary Mackay-Steven and Greg Stewart have performed in this league before and their early form has been encouraging. For Aberdeen, it's about consolidating in second place, a feat that should be beyond them given Rangers' budget. Some people said that a year ago, too, and they were wrong.

It would be a surprise, though, if there wasn't more of a challenge from Rangers. Their exit from Europe was cringe-making, but their pre-season friendlies have shown an improvement as their new team beds-in. They now appear to have something they haven't had in the longest time - a durable defence, governed by the remarkable Bruno Alves. If his partnership with Fabio Cardoso develops then Rangers will be on to something.

They have more ballast in midfield with Jack and Graham Dorrans. Rangers are better built this season. Harder. There are still doubts about their wherewithal to score goals, though. Despite all their new blood, Kenny Miller remains their go-to man. Miller, an astonishing professional, will celebrate his 38th birthday halfway through the season.

'St Johnstone's doubters have been burned before'

Every year there are doubts about St Johnstone's ability to keep reeling off top-six finishes, and every year Tommy Wright knocks those doubts out of the park. They were fourth last season - a cushy 12 points clear of Hearts.

But just as when Stevie May left in 2014 and when Michael O'Halloran departed two years later, there are issues about where the Saints are going to get their goals from. Danny Swanson was their leading scorer last season with 10 in the Premiership, but he's departed for Hibs.

This season could be the toughest of Wright's time in Perth, what with Hibs, and others, circling. Steven MacLean will weigh in and the hope for St Johnstone is that O'Halloran, back at McDiarmid Park on loan from Rangers until January, can be revitalised by his old manager. The doubters have been burned before. Caution is the best approach when making predictions about Wright's team.

Hearts are in crisis before a ball has been kicked in the league. They won 15 league points in 2017 on Ian Cathro's watch. In the entire Premiership, only Dundee did as badly in the second half of the season. No surprise, therefore, that Cathro has gone.

Whoever takes over - and surely it will be an experienced manager rather than another gamble on a rookie - there's a lot to be done. The defence looks panicky, the midfield is devoid of creativity and even with Kyle Lafferty up front, Hearts look a stressed and mundane outfit.

The Jamie Walker transfer saga is another cloud on their horizon, not that they need it. Hearts, unless they gather themselves quickly, will really struggle to make the top-six.

'There is an air of optimism around Partick Thistle'

Partick Thistle may have lost Liam Lindsay, the fine defender, but they've gained at the other end with the arrival of Blair Spittal from Dundee United. He has already scored three times in the League Cup.

Spittal gives Thistle another threat. That burden was carried lightly by the consistent Kris Doolan last season, who scored 14 in the league and finished sixth-top scorer in the entire competition. Doolan has come out of the traps early again this time. He has two on the board already.

Alan Archibald was disappointed with the way his team ended their season - only two wins from their last 11 - but they made the top-six and that was a big milestone. There is an air of optimism again this time. Archibald has been excellent. 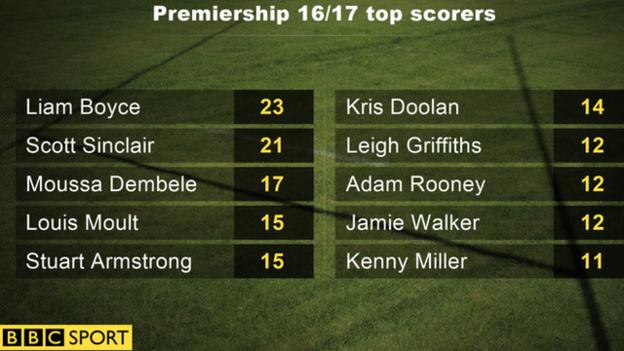 Of all the players who have departed the Premiership in the summer, it's hard to think of one who has left behind a bigger hole - a veritable crater - than Liam Boyce at Ross County.

Boyce outscored everybody in the league; Dembele and Leigh Griffiths included. His 23 goals represented 48% of County's total. How on earth is Jim McIntyre supposed to replace him?

He's gone for Thomas Mikkelsen, who scored seven in 17 games in the Championship with Dundee United, and Billy Mckay, who scored eight in 49 for Oldham and Inverness last season. Mckay has had a dispiriting time since his days of plenty in Inverness. In his last three seasons he's played with relegated teams: Inverness, Dundee United and Wigan.

We could see how Dundee struggled desperately to cope with the loss of the prolific Kane Hemmings last season. For County, this has to be about consolidation in the league in the wake of Boyce's departure.

Kilmarnock only scored 36 goals in the league last season - the worst record of all. Lee McCulloch has tried to address that with the arrival of Lee Erwin, Dom Thomas and Chris Burke. All three scored in the League Cup. Kris Boyd is off the mark as well. Surely Killie won't find goals as hard to come by this season?

Their defence has been bolstered as well. Kirk Broadfoot and Gordon Greer bring vast experience. Killie are going to have two hardy customers at the back in the manager's own image. Their season depends on how their new attacking players respond.

'If Motherwell are soft in defence again they'll be in trouble'

From the side who scored the fewest goals to the one who, apart from relegated Inverness, conceded the most - Motherwell. If it wasn't for Louis Moult scoring 15 in the league and the now departed Scott McDonald getting nine, Motherwell's awful defensive record could have proven ruinous.

They conceded 69 goals, not far off an average of two per game. Motherwell have some new defenders on their books and that's the bottom line of their season. Moult and Chris Cadden should score enough times to give them a chance, but if they're a chronic soft touch in defence again then Motherwell will be in major trouble.

Dundee gambled on Neil McCann and the gamble paid off. McCann has been a bundle of energy and positivity. The skies have cleared above Dens.

He looks to have recruited well. Glen Kamara is a strong new presence in the middle of the park, Roarie Deacon is a flying machine out wide and if his service to the striker, Sofien Moussa, improves then Dundee could have a really interesting season.

It's hard to see them toiling at the wrong end this time. A top-six challenge is not beyond them. 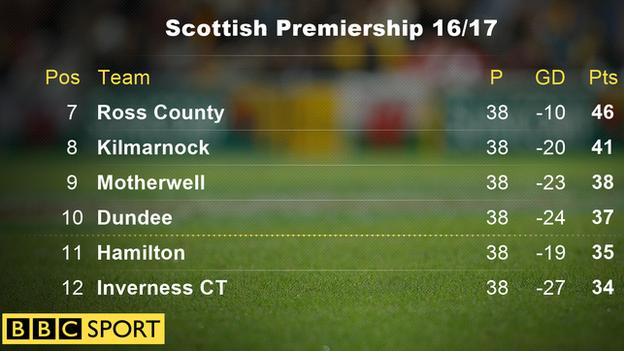 The boys at Hamilton are battle-hardened, which is just as well. They're mentally strong, no question. Many of us predicted relegation for Martin Canning's men last season but they came through, just.

This is a tougher league now. They'll not be surprised to hear more predictions of doom and gloom. They may thrive on such talk.

The bolter in all of this is Neil Lennon's Hibs. A threat to break into the top four? Absolutely. They may have lost Jason Cummings but they've gained Swanson and Simon Murray - 18 goals for Dundee United last season and seven in four games in the League Cup - and they have brought Anthony Stokes back to Easter Road. Steven Whittaker has returned to Edinburgh; John McGinn has gone nowhere - another boost.

They look a stronger all-round squad now than they were then. In what will be an emotional experience for him, Lennon will take Hibs to Celtic Park on 30 September.

Even by then, we will have had plot twists. The Premiership might lack certain things, but bonkers moments are not among them. That, apart from Celtic being champions, is the one guarantee.