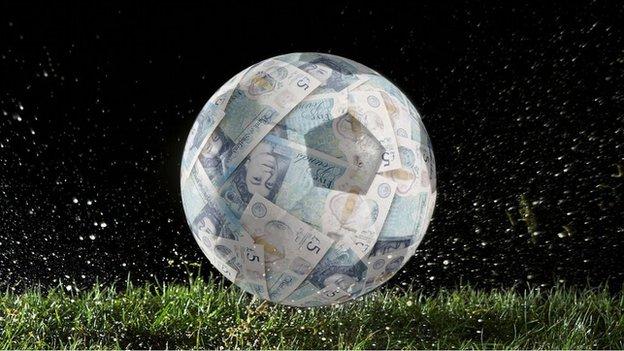 A £100m gap opened up between Premier League and English Football League clubs before a record TV rights deal even took effect, the BBC has found.

The difference in average turnovers between Premier League and Championship clubs grew in each season from 2014-16.

More and more Championship clubs are spending beyond their means chasing a place at English football's top table.

However, the Premier League is becoming a "closed shop" as successful clubs only become richer, an expert says. 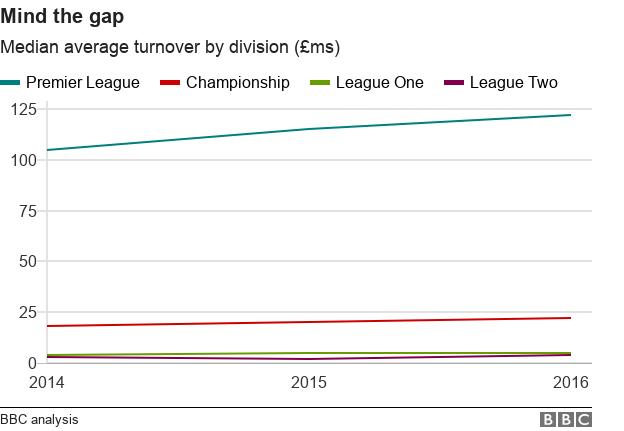 The EFL said its clubs were "in a good financial position overall because of the support of their boards and shareholders" and could compete with teams across Europe who did not take part in Uefa competitions but conceded there was "clearly a sizeable gap in revenue generation".

The Premier League said it made solidarity payments to EFL clubs "linked to the value of broadcasting contracts", made youth development and community grants throughout the EFL and made pension contributions and provided medical insurance to all professional players in the Championship and Leagues One and Two.

It said broadcast revenue gave its clubs "investment choices, and the financial regulations [including parachute payments for relegated teams] we have in place encourage good governance and sustainable investment".

The full extent of the impact of the new TV deal on clubs is expected to be seen first in the 2016-17 accounts, which have not yet been published.

The extra money awarded to clubs at the end of the last season, however, suggests the financial divide between the Premier League and the EFL will only widen further.

That was up from eight out of 24 in 2014 and nine of 24 in 2015, with the rise occurring despite rules being in force to curb excess spending.

The combination of a record TV rights deal and the effect of spending rules will prevent the rise of any "new money" clubs in future and extend a hierarchy of historically rich Premier League clubs, according to football finance expert Kieran Maguire, from the University of Liverpool.

He added that the Championship is also at risk of becoming a "basket case" division as clubs are tempted to stake more money on chasing Premier League status, if they have financial backers who can sustain losses.

The Premier League rejected that criticism, saying its model supported all of its clubs "to put on competitive and compelling football, and compete in European club competitions".

It said this season Brighton and Huddersfield Town would be the 48th and 49th clubs to compete in the Premier League in "a clear example of the overall health of the English game and the opportunities for ambitious clubs to develop and progress within the football pyramid".

What were the rules?

In the Premier League, what were known as Financial Fair Play (FFP) rules in place from 2014-16 limited the increases clubs could make in spending on players between seasons that were funded purely by new broadcast revenue.

They could, however, make bigger increases in player spending every year if they had more of their "own revenue", which could come from new commercial or sponsorship deals, profit from player sales, rising matchday income - such as an increase in ticket sales - or Uefa prize money from appearing, for instance, in the Champions League.

Clubs which could not satisfy those criteria were capped on any increases in player spending between seasons.

There was no cap on player costs or wages in the Championship but the rules limited losses to a maximum of £13m per season, or £5m per season if the owner did not inject cash into the club to cover those losses.

FFP was replaced with Profitability and Sustainability rules last season, which changed the assessment period to three years.

That change meant clubs that remained in the Championship from 2014-17 were permitted to lose an average of up to £13m each season without facing sanctions; they could lose a total of £39m at any point during those three years.

Maguire echoed the warning earlier this year from finance firm Deloitte that Championship clubs may continue to be tempted "to spend excessively relative to their revenues, particularly on wages".

"In the Championship, clubs have a three in 24 - or one in eight - chance of winning the lottery [by promotion] and it's just a case of how much are they willing to pay for a ticket," said Maguire.

"But it means the vast majority of clubs - if they do not have rich owners who can sustain losses - are happy to settle for staying up.

"The spending rules operate well at the lower levels because there is a wage cap but at the elite level it's anti-competitive and prevents the rise of the next new money club, such as a Manchester City."

The EFL told the BBC "these [spending] rules will be kept under regular review".

The gap in revenue generation between the divisions was "nothing new", said the EFL, which is reported to be set to announce its own new £180m-a-year TV deal.

"In addition, revenues for EFL clubs continue to increase through club-generated income, alongside improved central contracts and EFL-negotiated solidarity payments," the EFL added.

"FFP regulations were first introduced in 2012 to help support clubs to spend within their means.

"New regulations came into force this year, and now clubs in the Championship are governed by Profitability and Sustainability measures.

"These rules allow clubs to function in a fair and sensible manner, whilst also providing the freedom and flexibility for club owners to operate in what is an increasingly competitive marketplace. These rules will be kept under regular review."

Lord Alan Sugar, who was involved in the first Premier League TV rights deal in 1992, previously described the money coming into the Premier League as the "prune juice effect" - as in "it goes in one end and goes out the other".

The Premier League itself has previously highlighted its investment in facilities and good causes, the tax revenue from players' wages and said its wealth is distributed beyond those 20 clubs.

It emerged earlier this year higher costs for Premier League rights had hit annual profits at Sky despite a jump in revenues and new customers.