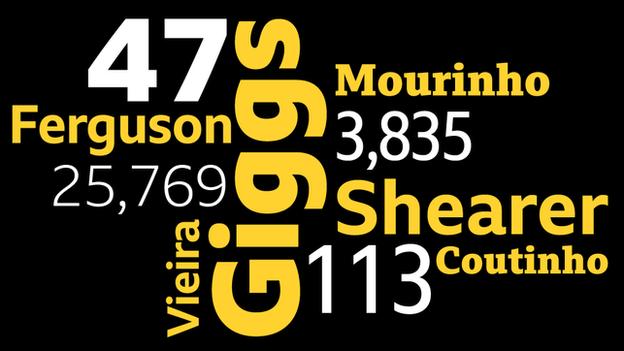 Thirteen players from outside the UK and Ireland, a crowd of 20,699 at Chelsea, defeats for Manchester United and Arsenal, wins for Coventry City and Sheffield United.

The Premier League landscape looks very different to the one on the opening weekend a quarter of a century ago, which also featured Oldham Athletic and Wimbledon.

After 9,746 games and 25,769 goals involving 47 teams across 25 memorable years, BBC Sport crunches the numbers and brings you the story of England's top-flight in facts and figures.

The Premier League battlefield is littered with managerial casualties yet it was all so very different back in 1992.

There was one sacking during the inaugural season - Chelsea's Ian Porterfield losing his job 29 games into the 42-game campaign on 15 February 1993.

It didn't take long for that figure to rise sharply.

Between August 1994 and August 1995 there were 15 managerial changes alone - including eight sackings.

Why the rapid increase?

After three 42-game campaigns featuring 22 clubs, England's top flight, already awash with television money, was about to be slimmed down to a 38-game format with 20 teams.

For the only time in Premier League history, four teams - instead of three - were facing relegation in 1994-95.

Over the years, the more lucrative the Premier League has become the more knee-jerk reactions have been in boardrooms. The league is a minefield for managers - and not only those at clubs trying to avoid the drop.

Roberto Mancini was sacked as Manchester City manager in May 2013 - a year to the day after winning the Premier League, while Claudio Ranieri was made redundant nine months after steering Leicester City to the 2015-16 title.

Chelsea were even less patient in December 2015 when they sacked Jose Mourinho seven months after winning the league.

That figure looks likely to rise further. In only two of the past 10 seasons has the number of changes failed to hit double digits.

A total of 221 different managers have taken charge of at least one Premier League game, 154 permanent and 67 caretakers.

From Scandinavia to boys from Brazil

Over 25 years, a total of 3,835 players have played at least one Premier League game while 113 different nations - including the Seychelles, Pakistan and Guinea-Bissau - have been represented.

At the beginning there was a strong Scandinavian influence. Eight players from Norway, including Liverpool full-back Stig Inge Bjornebye and Blackburn defender Henning Berg, featured in the inaugural season. There were a further four from Denmark and three from Sweden.

In December 1995, the Bosman ruling was introduced, allowing players to leave as soon as their contracts expired.

French players have consistently dominated the season-by-season overseas players' table - peaking at 44 in 2003-04 - but there are examples of significant shifts in trends.

The first Spaniard in the Premier League? Midfielder Nayim, who had already been at Tottenham four years, scored three times in 18 appearances in 1992-93. Twenty years later the number of Spanish players had swollen to 28 - an increase of more than 50% from 2006-07 - after the country's success at the 2010 World Cup and Euro 2012.

There was another signalling of a change in transfer trends when Oscar moved directly to England from Brazil in July 2012, joining Chelsea.

Brazilian talent had been limited on the Premier League stage - most players opting for Spain or Italy where it is seen as less physically demanding, fixture calendars are less congested and the climate better. There were exceptions, Juninho went straight from Sao Paulo to Middlesbrough in 1995.

Last season Philippe Coutinho became the highest-scoring Brazilian in the Premier League after making his way to Liverpool in January 2013, one of 14 players from the South American nation to play in England's top-flight in 2016-17.

Remember those crunching tackles by Vinnie Jones? The red mist descending on Lee Cattermole? What about Roy Keane, the former Manchester United captain, who spared no prisoners?

You might not be surprised to hear that former Everton striker Duncan Ferguson is joint-top of the Premier League's individual red card list with eight dismissals in 269 appearances - one every 33.62 games.

Which club have the worst sending-off record, of those to have played at least 100 Premier League games?

With 86 dismissals, Everton have clocked up more than anyone else. However, the Toffees have played more matches (962) than most of their rivals.

The Tractor Boys have not graced the Premier League stage since 2001-02 but their record of six reds in 202 games amounts to one dismissal per 33.66 games.

No team has scored more than Manchester United on the Premier League stage. Indeed, their tally of 1,856 - 158 more than second-best Arsenal - works out at 7.2% of all 25,769 goals scored in the competition's history.

But do goals always guarantee success? Not for Blackpool. After netting 55 in 38 games in 2010-11 - as many as Tottenham who finished fifth - Ian Holloway's side hold the record for being relegated with most goals scored.

The inaugural season of 92-93 saw a record total of 1,222 goals - Sheffield United's Brian Deane scoring the first of the Premier League era with a header after five minutes against Manchester United at Bramall Lane.

At the other end of the pitch, Swindon Town, in their only Premier League season in 1993-94, are the only side in 25 years to concede 100 goals.

Shearer tops the all-time list with 260 goals for Blackburn and Newcastle, with Wayne Rooney second on 198 for Everton and Manchester United.

Getting a ticket for a Premier League match these days can be a frustrating and futile task. Not so 25 years ago.

A crowd of 12,681 turned up at Coventry's old Highfield Road on 15 August 1992 to watch the Sky Blues beat Middlesbrough 2-1, while Arsenal and Chelsea both failed to attract 25,000 to their home games on the opening weekend.

Meanwhile, only 3,039 turned up to see Tony Cottee score twice for Everton in a 3-1 win against Wimbledon at Selhurst Park on 26 January 1993 - the lowest attendance in Premier League history.

In the last 25 years, several clubs, including Manchester United, Chelsea and Liverpool, have extended their grounds, while others have moved to new homes like Arsenal,Manchester City and Southampton.

If you add up the attendance from each of the 9,746 games, the figure comes to more than 313 million. The population of the United States in 2010 was 308 million. 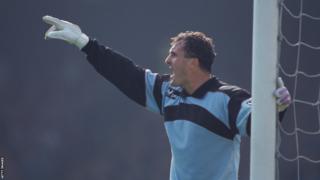