The Premier League was 25 years old on 15 August and has been the home of some of the greatest players of the modern era.

But who would make your all-time Premier League XI?

Over the past few weeks 379,172 of you have picked your favoured players from the shortlist selected by a panel of BBC experts.

Gary Lineker, Alan Shearer, Ian Wright and Danny Murphy picked their goalkeeper and defence on the first Premier League Show of the new season - and you can watch this on the BBC iPlayer now.

They selected their midfield and attack on the Thursday's Premier League Show, which will be available on iPlayer shortly.

Here is the team you have selected (results were tallied at 12:00 BST on 23 August - you can still make and share your selection, but votes will not count towards the team below): 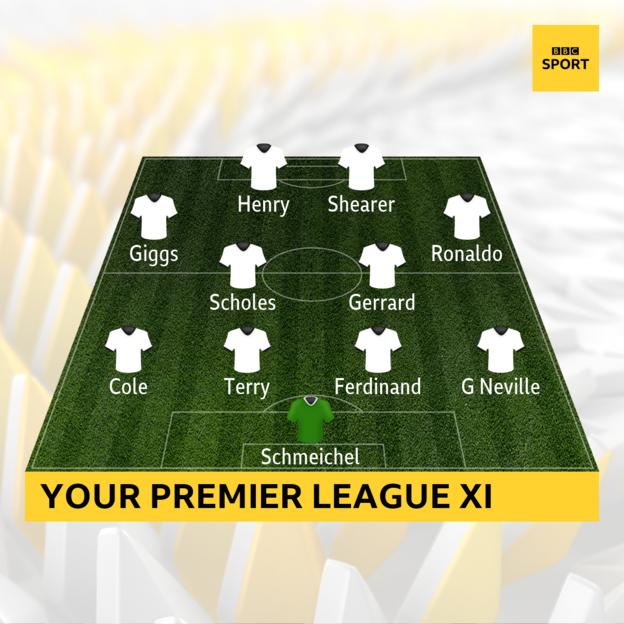 The signing of Eric Cantona from Leeds is often cited as the masterstroke from Sir Alex Ferguson that transformed Manchester United into the Premier League's first dominant force. But the capture of keeper Schmeichel from Brondby - for a little over £500,000 - was arguably just as important.

Big, strong and supremely reliable, Schmeichel had a powerful and accurate throw and a signature 'starfish' save that blocked many a seemingly certain goal. With five Premier League titles to his name from eight years at United (as well as a season each at Aston Villa and Manchester City at the back end of his career) it is easy to see why 239,034 of you voted for the Dane.

With 182,548 votes, Neville was your overwhelming choice as right-back. A member of Manchester United's famed 'Class of '92' (along with his younger brother Phil), Neville emerged from the Red Devils' academy and spent the entirety of his 19-year playing career at the club.

Neville wasn't the biggest, strongest or quickest, but he more than made up for this with his dedication, professionalism and passion. Incredibly reliable over 400 Premier League appearances, he won the top-flight title eight times and has since used his intelligence and insight into the game to good effect as a pundit.

Ferdinand emerged from West Ham's academy to much fanfare, touted as the 'new Bobby Moore'. England caps and a record-breaking £18m transfer to Leeds would follow, but it was not until he moved over the Pennines to Manchester United in 2002 (for another record-breaking fee of £30m) that he would begin to reach his full potential.

His excellent ability to read the game, coupled with speed and athleticism, helped Manchester United win another six titles between 2002 and 2014 before he departed for a season at QPR. His career was not without controversy, most notably an eight-month ban for missing a drugs test. But it is his achievements and excellence over 504 Premier League appearances that earned him 203,108 of your votes.

Captain, leader, legend. Terry was the rock at the heart of the Chelsea defence for the best part of 19 years. Joining the Blues aged 14, he made his first-team debut in 1998 and went on to play 492 Premier League games for the club.

He built his reputation on his strength and bravery at the back but sealed his place as a Chelsea legend through his leadership skills. Made club captain by Jose Mourinho, he rewarded the Portuguese by leading the Blues to successive Premier League titles between 2004 and 2006. Three more would follow before he bid an emotional farewell and left to join Aston Villa in 2017. With 187,100 he was the overwhelming choice to partner England colleague Ferdinand at the back.

With 207,762, Cole earned over 100,000 more votes than his nearest two challengers as left-back - Patrice Evra and Denis Irwin - combined. A divisive figure in London, Cole made a controversial transfer from Arsenal to Chelsea in 2006, which strained relations between the clubs and led some to question the player's real motive for the move. What is beyond doubt is the Englishman's ability.

Possessed of skill, speed and stamina, Cole was regarded by many as the world's best left-back, at his peak. He won two titles at Arsenal - including as an integral member of the 'Invincibles' side of 2003-04 - and a further league crown at Chelsea, in 2009-10. He made 385 Premier League appearances before departing England for spells in Italy and the US.

At current club Real Madrid, Ronaldo has scored 407 goals, won the Champions League three times and claimed the Ballon d'Or four times. He has also lifted the European Championship trophy with Portugal. Before all that, though, he propelled himself to global stardom during a stellar spell at Manchester United.

He joined United as an 18-year-old from Sporting Lisbon for £12.24m and left them six years later for a world record fee of £80m. In between he scored 84 times in 196 Premier League games (including 31 in 34 in 2007-08) and won the title three times. Very quick, very strong and supremely skilful, Ronaldo can play on either flank or anywhere along the forward line. The majority of your 272,084 votes have him on the right of midfield.

There were times during Gerrard's 17-year Liverpool career when it felt like the midfielder was driving the club forward on his own. Blessed with brilliant touch, great stamina and a powerful shot, the Englishman was as inspirational as he was talented.

For his last couple of seasons at Anfield he had to cope with mocking from opposition fans for the slip that allowed Demba Ba to score in a Chelsea victory that contributed to the Reds missing out on the Premier League crown in 2013-14. He would end his time with his hometown club without a league title to his name but that takes little away from a superb career that saw him score 120 goals in 504 top-flight appearances, and 177,696 votes gave him his place in the centre of your midfield.

How good a player was Paul Scholes? Just ask World Cup-winning duo Zinedine Zidane and Thierry Henry. The former described the Manchester United midfielder as "undoubtedly the greatest midfielder of his generation" while the latter called the Englishman "the greatest player in Premier League history". With 183,486 votes to his name, it is clear many of you agree.

Another of Manchester United's 'Class of '92', Scholes made his debut in 1994 before going on to make 499 Premier League appearances and win 11 league titles over 20 seasons. Technically brilliant, intelligent and tenacious, Scholes' greatest asset was his shooting, which enabled him to weigh in with 107 top-flight goals.

The Welsh winger began his one-club career in 1990 and ended it 24 years later as one of the game's most decorated players. Whether on the left wing (which is where he played much of his career and where you have placed him) or in central midfield (where he ended up in his later years) he remained class.

Arsenal fans were still upset about the sale of French forward Nicolas Anelka to Real Madrid for £23.5m on 2 June 1999 when Arsene Wenger signed his compatriot Thierry Henry for £11m a day later. Few would have guessed it at the time, but they had just signed one of the best forwards in their history.

Blessed with lightning pace and possessing silky dribbling skills and a predatory eye for goal, Henry had been wasted on the wing at previous club Juventus, but flourished in a central role at the Gunners. In 258 Premier League appearances over two spells (1999-2007 and on loan in 2011-12) he scored 175 goals and won the title twice. It was this that convinced 233,642 of you to vote for his inclusion.

On sheer weight of goals, Alan Shearer has no Premier League peers. The English striker scored 260 of them in 441 games for Blackburn and Newcastle between 1992 and 2006. His current equivalent in the national team, Tottenham's Harry Kane, would need to score 20 top-flight goals every season from now until he is 33 just to get close to that tally.

During his career, Shearer made two British record-breaking transfers. His £3.6m move from Southampton to Blackburn occurred during the summer prior to the Premier League beginning and proved the main impetus behind Rovers' ascent to champions in 1994-95. In the summer of 1996 he joined hometown club Newcastle and while he did not add collect any further winners' medals, he became a legend for the Toon Army. A tally of 154,570 votes ensured that he led the line for your team.

Who would you pick to be in your all-time Premier League XI? It's your turn to sift through 25 years worth of footballing history to select your favourite XI - and then share it with your friends using our team selector.

If you can't see the selector, please use this link to pick your XI.