Silva has made 58 appearances for Monaco this season - including two against City in the Champions League - scoring 11 goals and 12 assists.

He said the chance to work with Pep Guardiola influenced his decision.

"Of course when you have the opportunity of being trained by Guardiola, you don't say no," added the playmaker, who has played 12 times for Portugal, scoring once.

"If not the best coach in the world, he is one of the best."

Silva was integral to the Monaco side that reached the semi-finals, suffering eventual defeat to Juventus, who play Real Madrid in the final on Saturday, 3 June.

'The best I've played against this season' 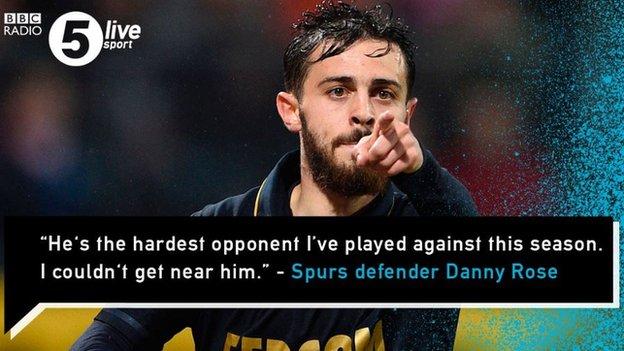 I am surprised in that I think that is the one area of the pitch where they have enough options. Manchester City's attack has been sensational this season. Bernardo Silva is very similar to David Silva. I wouldn't let David Silva go, I think he's been tremendous.

You don't know if other clubs were ready to push the button and City thought 'we have got to do it'. There are some players that come along and you have to do it there and then.

I played against him away this season and he's the best opponent I faced. It's a great addition and gives Pep Guardiola another attacking option.

Silva was excellent in Monaco's 5-3 Champions League defeat at Etihad Stadium in February and Pep Guardiola decided the Portuguese was a man he wanted. So much so, in fact, that he is prepared to put him among the top five most expensive players in City history.

A product of the Benfica academy, Silva is an attacking right-sided midfield player and is, at 22, just the kind of age Guardiola likes - old enough to understand his role, young enough to absorb the intricate tactical lessons his new manager imparts.

If, as expected, Kyle Walker also arrives this summer from Tottenham, Guardiola will have the raw pace from his full-back that creates the danger - and space - for Silva to cut inside and slice open defences.