You can watch the FA Cup live on BBC One and the BBC Sport website, with coverage starting at 16:15 BST on Saturday.

BBC Sport's football expert Mark Lawrenson has pitted his wits against a different guest in every round of this season's FA Cup.

For Saturday's Wembley final between London rivals Arsenal and Chelsea, Lawro is up against the four people above him on the leaderboard.

The joint leaders are 1Xtra breakfast show DJ A.Dot - who is backing Chelsea - and Arsenal Fan TV host Robbie Lyle- who thinks the Gunners will triumph.

"Now, A.Dot you are a fantastic DJ and you know your music but, when it comes to football, leave that to me," Robbie told BBC Sport.

"I am confident it will be a double celebration for me at the weekend. Arsenal lift the FA Cup trophy, and I finish top of Lawro's leaderboard." 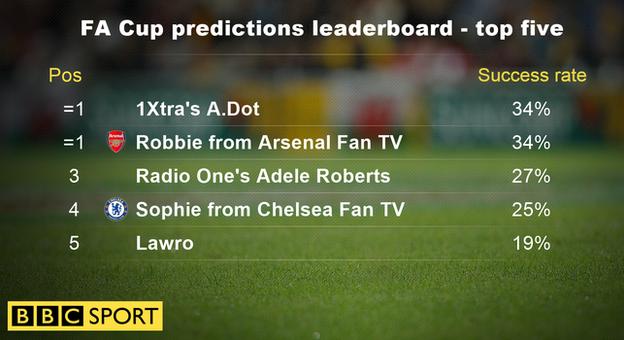 Radio One DJ Adele Roberts, who is on BBC Radio 1 from Monday to Friday on Early Breakfast from 4am to 6am, and Sophie Rose, from Chelsea Fan TV, also return to give their FA Cup final verdicts.

A.Dot and Adele are both appearing at the Radio 1 Big Weekend in Hull on Saturday and Sunday.

Arsenal are running out of central defenders - Laurent Koscielny is suspended, Gabriel is injured and Shkodran Mustafi is a fitness doubt.

Per Mertesacker is available after his long-term knee injury but the 37 minutes he played after coming on as a substitute against Everton last week is the only action he has seen all season.

If Mustafi does not recover from concussion, then if Gunners boss Arsene Wenger is going to stick with playing with three at the back, he has to play Mertesacker alongside Rob Holding and Nacho Monreal.

I don't think Wenger will change things around because the rest of his team are familiar with that system.

And, it is certainly a formation that suits a centre-back who is a bit short of fitness and sharpness - and pace, because Mertesacker would have two faster men as a kind of safety net either side of him.

True, Mertesacker, Holding and Monreal cannot have played together in that system before and, speaking from experience, communication and concentration could be an issue.

If you are not well-drilled as a defensive three then sometimes you all end up relying on someone else to pick up a player in open play, because you are thinking 'we have got an extra man here - we will be ok'.

But these issues at the back do not make things insurmountable for Arsenal. In fact, because the rest of the team are used to a 3-4-2-1, I don't see it being a massive problem at all.

The key area on Saturday for Arsenal is not their defence, or their attack - which is very strong. It is in midfield.

Chelsea will win comfortably if they take control of that area but Arsenal should not be short of numbers in there.

I think it is imperative for the Gunners that they keep the game tight and fight and scrap like they did in their semi-final against Manchester City.

They are playing a team who can win the Double, which is extra special and a major achievement as everyone knows.

I did it with Liverpool in 1986 and although I obviously celebrated it at the time when we won it, it is only really over the years that you realise it has more importance because so few teams manage it.

We know Chelsea manager Antonio Conte is absolutely driven and he will be telling his players that they have one more game this season, and they have the chance to do something that hardly any players have achieved.

I think that is how they will be approaching the game - to complete the job - and this Chelsea team is a machine that is very difficult to stop.

Whatever the state of the game - whether they are holding on to a lead, or chasing a goal - they are ruthless.

"I think this game is going to compound all of Arsenal's woes this season.

"Chelsea are going to nick it, and then get an extra goal at the end."

"I am going for Arsenal to win.

"Now, I can hear everyone laughing and sniggering, saying 'what is he on? What is he talking about - it's Chelsea' but this is how we are going to beat them.

"We have hit a bit of form and we have been playing well and winning games - five in a row at the end of the season, even one with 10 men on the final day.

"Chelsea are the champions but they have been having a party for the past few weeks and they are just assuming they only have to turn up on Saturday to win. 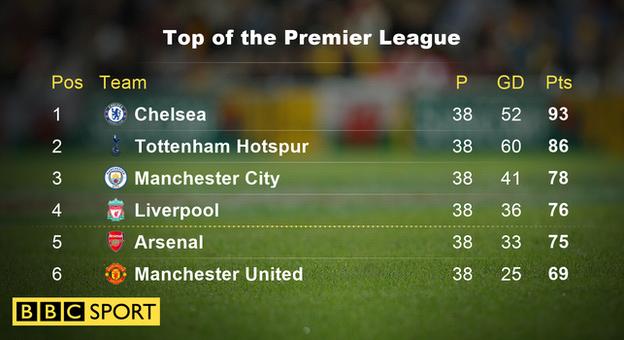 "But Wembley is when Arsenal really come to the party. We have won the FA Cup 12 time and if we win it this weekend we will have won it more times than anyone else in history.

"You hear that, Chelsea fans? History. Something you don't know a lot about.

"Koscielny is out, Mustafi could be out but we can still sneak up on them and do some damage in this final, and I am convinced that Arsenal are going to win it."

"I can move up the leaderboard if I get this result right, so there is a lot resting on it.

"It is a huge match and a huge rivalry, so both teams are really going for it.

"Arsenal wanted more from their season, which is why I feel like they are going to throw everything at getting some silverware on Saturday. Chelsea are champions, and will want to really ram that home.

"I am going to go for the Gunners. My heart is saying I want them to win - I live near the Emirates Stadium and see their fans all the time, and love it when they are happy."

"Yes, we are favourites - but every game you play is different. It doesn't matter who has played the better football this season.

"Arsenal have won the FA Cup twice recently and we need to be prepared for a tough game.

"Saying that, Antonio Conte will have something up his sleeve. Another masterclass I think - just like against Tottenham in the semi-final. Go on you Blues."

Lawro made a prediction for all 380 Premier League games this season. The final table based on all of his predictions is at the bottom of this page.

In Lawro's league table, Chelsea and Liverpool finished joint champions and, overall, he has four teams out of 20 in their correct positions, with seven more only one place out.

"Chelsea were champions, so at least I got one bit right," Lawrenson said.

"Liverpool were unbeaten but it was not planned or something I was even aware of until recently, because I don't look at that league table when I make my predictions.

"I am trying to get as many results right as I can each week, and I never give that table a moment's thought.

"But the unbeaten thing actually happens quite regularly, with other teams too. The main reason is that I don't tip the top teams to lose very often full-stop - they don't, so why would I?"

Lawro has been pitting his wits against a different guest each week this season and his opponent for the final round of fixtures was drummer Ben Thatcher from rock band Royal Blood.

Thatcher and Lawro both got seven correct results, including one perfect score, from Sunday's 10 games for a score of 100 points.

Lawro ended the season 680 points ahead of his guests, after wins in 24 out of 38 weeks, and with an average score over the season of 91 points.