But the final day of the 2016-17 Premier League season offered up much stranger goings-on on the pitch - involving snorkels, stray birds and debuts for millennials.

The things people do for a freebie...

Stoke fan Tyrone Sidley, aka @stokemadsidders on Twitter, messaged striker Peter Crouch and offered to wear Speedos for the game at Southampton if, in return, he could have Crouch's match shirt.

The England international bartered with him, and said he had to wear the swimwear - and nothing else - for the trip to the south coast. Team-mate Charlie Adam then chimed in with a suggestion of a snorkel and flippers, too.

Crouch scored the only goal of the match in Stoke's win over Saints and at the final whistle he found Tyrone in the crowd, complete with tiny shorts and snorkel, gave him a big kiss on the head and handed over the match-winning shirt.

Crouch tweeted later on: "Great way to end the season with a win and celebrating with the legend that is @stokemadsidders." 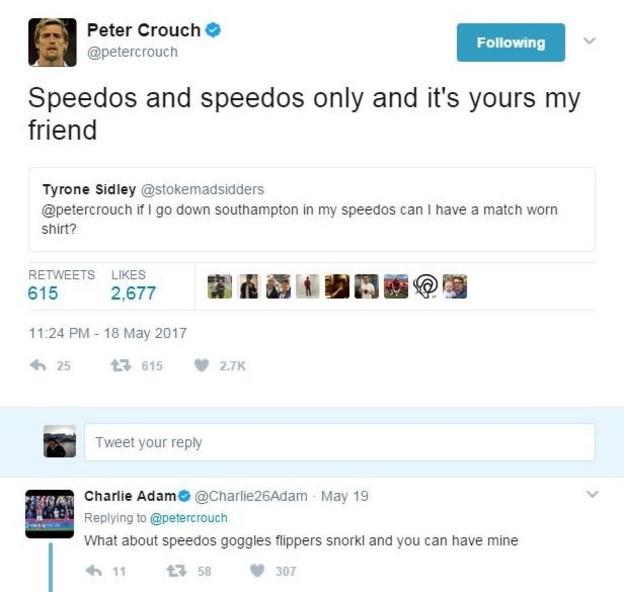 How many keepers do you need, Walter?

Watford announced earlier this week that Walter Mazzarri would take charge of his final game as manager on Sunday - after only one season at the club.

And he decided to go out with a bang, by naming three goalkeepers in his squad to face Manchester City.

Rene Gilmartin and Costel Pantilimon were named on the bench but neither was called on as first-choice Heurelho Gomes shipped five goals against Pep Guardiola's side.

A bird in the hand

There were more weird events to come at Vicarage Road.

An unruly bird made its way on to the pitch and interfered with play early in the second half.

Watford's own Dr Doolittle, M'Baye Niang, came to the rescue and picked the little fella up and handed it over to the fourth official so the game could restart.

Some very cynical fans suggested it was the Hornets' best moment of their 5-0 defeat.

You wait four weeks for one Ayew to score and then two pop up in the same minute.

Jordan Ayew turned home an equaliser for Swansea against West Brom in the 72nd minute and seconds later his brother Andre headed West Ham ahead against Burnley.

You can't win anything with kids

Jose Mourinho named Manchester United's youngest ever starting XI in the Premier League on Sunday against Crystal Palace - and two of them reached top-flight landmarks.

Josh Harrop, a 21-year-old forward, became the 100th player to score a Premier League goal for the Red Devils. He netted a superb solo effort as his side won 2-0.

Later on, Angel Gomes was brought on as a substitute and the 16-year-old became the the first player born in 2000 to play in the Premier League.

He wasn't even alive when United won their famous Treble. Now we feel old.