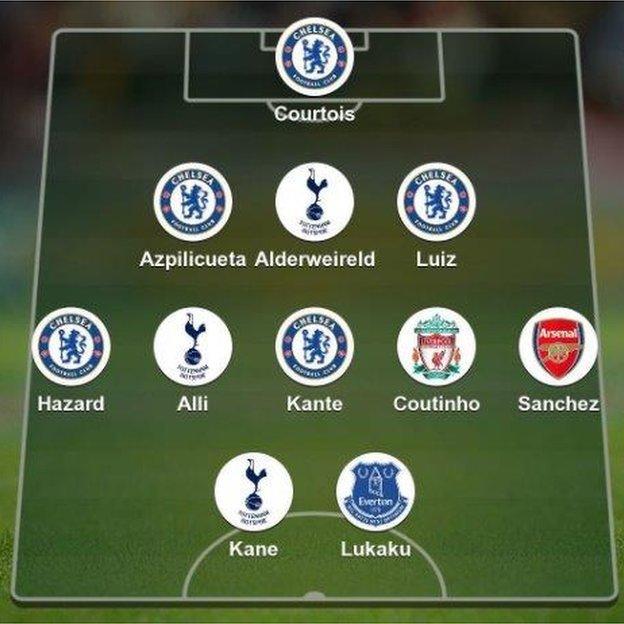 After picking my teams of the week over the course of another compelling Premier League campaign, it is time to reveal which players have made my best XI of the season.

Fifth-placed Arsenal and seventh-placed Everton both get a man in the side, but one of the top-four squads misses out entirely.

There cannot be many Premier League goalkeepers who can claim to have had a better season than Manchester United's David de Gea - but Thibaut Courtois can.

The Chelsea player has won the title, and is another game from completing his first Premier League and FA Cup Double. There are not many players who can claim that either.

What has impressed me the most about the 25-year-old's season is that every save has been completed with the minimum of fuss.

The Belgium international has produced some outstanding performances and his Golden Gloves award is a fitting tribute to a marvellous season.

Cesar Azpilicueta might not be the best defender in the Premier League but he has certainly been the most consistent player for Chelsea. What a season he has had.

The Spain international has not missed a league fixture. The only other Chelsea player with such consistency in recent times is Branislav Ivanovic, and I thought he was irreplaceable. Apparently not - Azpilicueta seems to have done it.

John Terry aside, you would have to go back to the days of Eddie McCreadie and Ron Harris - who played for the Blues in the 1960s and 1970s - to find defenders who played every league fixture. It is virtually unheard of in the modern era.

What does this say about Azpilicueta? Well it says he is remarkably fit, looks after himself impeccably well and probably only drinks the finest Rioja!

I have been fascinated by the performances of Toby Alderweireld. He has performed brilliantly all season but remains slightly anonymous among the stars at White Hart Lane.

Yet I sense if Alderweireld were to leave Tottenham then he would, in my opinion, be the most difficult player to replace.

I say this because it was in my FA Cup interview for Football Focus, before the semi-final with Chelsea, that I raised with the Belgium defender the issue about his contract. To my amazement he had not signed it at the time and, with Barcelona always on the look-out for top-class defenders, suddenly visions of him defecting to the Spanish giants became plausible.

However, it gets worse. At odds of 18-1, Spurs boss Mauricio Pochettino sounds like a great bet to join Lionel Messi and the Catalans and, if that were to happen, Alderweireld would almost certainly follow the Argentine out of the Lane to the Nou Camp.

These things are not rocket science in football. However, if Spurs were found to be asleep at the wheel and allow such a catastrophe to happen, it would signal the end of what could be a great team in the making.

I don't know what to say about David Luiz that I haven't already said this season. He has been the defender of the year for me.

The Brazil centre-back has played this season with an authority that I have only seen in great defenders. Dutch master Rudi Krol and Italian great Paolo Maldini both had it, while Liverpool legend Alan Hansen and Arsenal hero Tony Adams also produced such performances in their careers.

Needless to say all the players I have mentioned won honours befitting their status. David Luiz is having the season football players dream about. Only losing the FA Cup could possibly spoil it.

Just before it was announced who was about to win the PFA Players' Player of the Year award, Spurs legend Clive Allen turned to me and said: "I really hope its N'Golo Kante."

I agreed with the remark, and so did five other guests who had remained silent until that point. Needless to say, when Kante was announced the winner, we joined in the standing ovation in glorious adoration of this wonderful player.

However, what was most striking was we were in the company of the most adorably humble human being. I never thought they made professional footballers like that.

He looked unfit, lacking in attitude and totally uninterested in the fixture. He wasn't the only Chelsea player at the time, to be fair, but make no mistake Eden Hazard was in crisis.

Fast forward to summer 2017 and the Belgium international must have every top team in Europe inquiring about his services.

The question is, can Chelsea keep him? If they can, they must be in with a great chance of winning Europe's biggest club competition. Lose him and they can kiss any Champions League hopes goodbye.

This lad has the world at his feet and it presents the 21-year-old midfielder with some amazing opportunities. I am fascinated to see what he intends to do with them.

There is no doubting his talent but he's not the finished article by any means. The title 'young' player of the year is very fitting, however. Dele Alli's development is not only crucial to Spurs but to the England team.

As Wayne Rooney's spectre sadly begins to fade, Three Lions manager Gareth Southgate will need a star to replace him. I believe Alli is that star and Spurs and England must protect him.

People who read my team of the week on a regular basis will know what I think of Philippe Coutinho. Frankly, Liverpool would have been sunk this season without him.

If you don't believe me, look at Liverpool's form when he was out of action for two months with injury. Yes, they lost Sadio Mane to the Africa Cup of Nations at the time but Mane without Coutinho is like having Rush without Dalglish.

Coutinho is a genius and Liverpool finishing in a Champions League spot has saved Jurgen Klopp, I believe, from losing the Brazilian to one of the European giants.

Next season, Anfield will come alive again when they host Champions League fixtures once more, and they have a special player in Coutinho to grace those occasions.

In all my time in football, I don't think I've seen a season like this at Arsenal. Fans arguing with each other over whether Arsene Wenger is fit to run the club, all because they think they are entitled to win the Premier League? And now it appears those in the boardroom are at it.

Throughout all this turmoil, Alexis Sanchez has shown himself to be above all the angst in the club and able to perform in a way you expect from a world-class player.

The 28-year-old Chilean almost single-handedly kept Arsenal in the hunt for a Champions League spot right until the last kick of the season and, at the same time, allowed Wenger and the club some dignity.

Sanchez will also have something to say in the FA Cup final as well. The bigger the game, the more he seems to like it. However, the issue for Arsenal is whether the former Barcelona player will remain at the club after a season like this. Doesn't he deserve better?

To score more than 20 goals in one season is impressive, but to do it for three consecutive seasons is quite remarkable. To win a second Golden Boot in your third season is a fitting tribute to Harry Kane's exploits.

I'm delighted for the player because the Spurs striker carried the can for England's debacle in the European Championship and it nearly destroyed him.

Nevertheless, I couldn't believe the headlines granting the player world-class status after his four-goal blitz of Leicester City in midweek. What poppycock!

The 23-year-old definitely has the potential to be world class, of that I am in no doubt. But not yet.

Robert Lewandowski, Didier Drogba and Thomas Muller have all been, or are, world class but all won trophies to demonstrate the fact.

Kane would do well to ignore such hollow praise and stick to the task ahead. Make Spurs world class and you will inevitably be world class with them.

Now here is a player who has done more than any other to try to elevate Everton into a top-six side under Ronald Koeman. Sadly it hasn't happened this season but that was not Romelu Lukaku's fault. The player could not have done any more.

What it has done is alert Chelsea and Arsenal to the big man's ability to hit 20 goals a season. However, there is only one team Lukaku can seriously consider and that is his former club Chelsea.

The Everton striker is the nearest thing I have seen to Didier Drogba and, under Antonio Conte, I think Lukaku will suit their style of football perfectly.

The 24-year-old Belgian is no Drogba yet but I really would like to see him in the Chelsea set-up again. This time around the player is so much more mature and capable.

Lukaku has unfinished business at Stamford Bridge and the Champions League is the natural progression.

I knew what Antonio Conte had achieved at Juventus, and I observed his antics on the touchline when managing the Italian national team, but I never took him that seriously. He hadn't managed in the Premier League, that was why.

Unlike former Chelsea boss Carlo Ancelotti, or Manuel Pellegrini at Manchester City, both of whom had ploughed their way through an unrelenting campaign to win the Premier League title in their first seasons, Conte still had something to prove.

We don't have winter breaks here where players disappear up into the mountains with their managers to opulent soccer retreats and bathe their weary legs for a month in preparation for the second half of the season. This the Premier League and Ancelotti and Pellegrini just about survived it with their reputations intact.

He has Eden Hazard playing the football of his life, and getting Diego Costa playing so effectively again and scoring goals, after the player was dropped over a dispute with a coach about his fitness amid speculation of Chinese Super League interest, was pure genius.

Keeping it all together when players and others are trying to rip your dream apart, and all under the Premier League spotlight, is what separates Conte from the rest.

I have spent a lot of time at Stamford Bridge this season and Conte has proved to be a warrior on the touchline and a thoughtful, sophisticated, well-mannered gentleman off it. Well done, Antonio.

You took Jose Mourinho's misfits and turned them into champions. Now that is management.