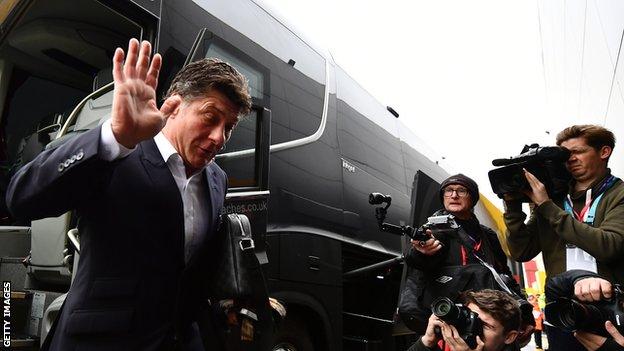 Manager Walter Mazzarri is to leave Watford after Sunday's final game of the season at home to Manchester City.

The 55-year-old Italian was in charge of the Hornets, who are 16th in the Premier League, for less than a year.

Watford's next manager will be their ninth in five years and the eighth since the Italian Pozzo family took over the club in 2012.

Chairman Scott Duxbury announced the latest exit after the board "discussed goals and aspirations" with Mazzarri.

"It was decided he will be stepping down from his position as the club's head coach," said Duxbury.

Monday's 4-3 defeat at champions Chelsea was their fifth loss in a row, although the Hornets avoided relegation and are six points above the drop zone with a game to play.

The club announced in May 2016 that former Inter Milan boss Mazzarri would become head coach on a three-year deal from 1 July after the departure of Quique Sanchez Flores.

Flores left despite taking the club to the FA Cup semi-finals and comfortably retaining their Premier League status, while Slavisa Jokanovic exited a year earlier after leading Watford into the top flight.

Mazzarri, who guided Napoli to the 2012 Coppa Italia title and runners-up spot in the 2013 Serie A, won 11 of his 37 Premier League matches at Watford.

The Italian, who conducted his press conferences through an interpreter, was hampered by injuries to key players but certain sections of the supporters did not warm to him.

Popular club captain Troy Deeney had been relegated to the bench in recent weeks, and there were reports of player unrest.

There have been problems rumbling at Watford all season with Mazzarri in charge and it was just a question of when it would come to a head.

These have included training issues (players undercooked pre-season, overcooked towards the end of the season) causing unrest in the squad and possibly the reason for long-term injuries to five or six current key players.

His relationship with skipper Troy Deeney has appeared strained for most of the season with the influential captain dropped three times in the past two months.

There seems to have been unhappiness within the squad with the tactics, formations and philosophy of the 'old school' boss. It certainly appeared Mazzarri had 'lost' the dressing room weeks ago.

His lack of English has irritated the club, fans, media and players with instructions on the training ground and in games via interpreters.

When the bad run came, Mazzarri had little or no support anywhere around the club. The inevitable has occurred.