Leigh Griffiths and Stuart Armstrong secured a 34th win of the campaign for Brendan Rodgers' side, who were then presented with the Premiership trophy.

Rodgers' side, who won the League Cup in November, will attempt to win the club's first domestic treble since 2001 when they take on Aberdeen in Saturday's Scottish Cup final.

Celtic, who have won six top-flight titles in a row, are unbeaten in 46 domestic games this season (38 in league, eight in cups), and 47 domestic matches overall including the final league game of last season.

And they are unbeaten in 31 games in all competitions since losing to Barcelona in the Champions League on 23 November.

With the win and goals against Hearts, Celtic set new records for the Scottish Premier League/Premiership era, including goals, points, wins and margin of victory. 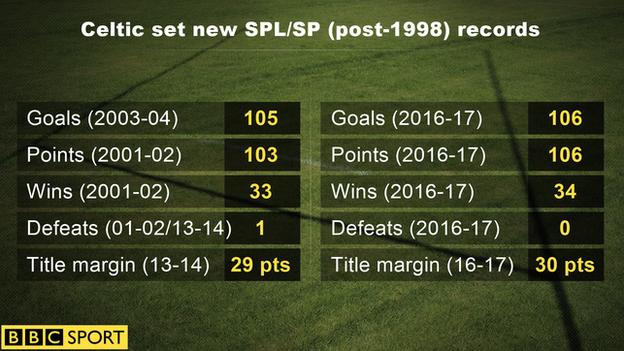 With so much anticipated from the hosts, Hearts head coach Ian Cathro sought to frustrate Celtic, restricting them to long-range efforts.

Kieran Tierney and Callum McGregor came closest with those and Griffiths sent a free-kick into the side netting.

And it could have been Hearts that went in front, Bjorn Johnsen laying a free-kick off for Alexandros Tziolis to strike narrowly over.

When Celtic did get into the box, goalkeeper Viktor Noring was in fine form.

The Swedish stopper made an instinctive block to deny Dedryck Boyata at a corner and then punched away Patrick Roberts' dangerous cut-back.

However, Hearts' resistance was broken when Roberts danced clear on the right and set up Griffiths for a confident header.

And Griffiths was involved in the second, his cross not properly cleared and falling for Armstrong to finish.

Though sustaining a fourth straight defeat, Hearts competed well in Glasgow and fared much better than their 5-0 home loss to Celtic last month - the match that clinched the title for Rodgers' men.

Johnsen headed against the right-hand post from a Malaury Martin corner as Cathro's men sought consolation.

And substitute Martin's volley was then kept out by Craig Gordon late on.