Monaco have won the Ligue 1 title for the first time in 17 years after a 2-0 win at home to Saint-Etienne.

Needing a point to be crowned French champions for the eighth time, the in-form Kylian Mbappe scored the opener in style.

Mbappe, 18, latched on to captain Radamel Falcao's through ball, skipped around the goalkeeper and slotted in.

Forward Valere Germain made sure of the win in injury time with a tap-in from close range.

The home side had all but secured the title before kick-off, with Paris St-Germain three points behind with just one game to play and a far inferior goal difference.

The new champions rarely looked troubled in registering their 11th consecutive league win and subsequently lifting a trophy that has eluded them since the turn of the millennium.

Youth and experience come together

The last time Monaco won Ligue 1 they were fielding a team which included the French trio of Fabien Barthez, David Trezeguet and Willy Sagnol.

Monaco's success this season is largely down to the reinvigorated Colombian Falcao and the emergence of French teenager Mbappe.

Falcao, 31, has put the disappointment of his loan spells with Manchester United and Chelsea, where he scored just five goals in 36 appearances, behind him.

The forward will finish top scorer for Monaco this campaign, netting 24 times with four assists.

Mbappe has caught the eye of suitors from the top teams in Europe in his breakthrough season. He has scored 15 league goals this season to add to his remarkable performances in the Champions League.

That defeat did not overshadow their achievements, however, as Monaco brushed aside Tottenham Hotspur, Manchester City and Borussia Dortmund en route to the semi-finals.

Monaco's triumph is all the more impressive given they finished eighth in Ligue 2, France's second division, five years ago, having been in and out of the relegation zone over the course of the 2011-2012 season.

The following season they finished top of Ligue 2 and returned to top-flight football.

Just two seasons later, they have scored over 104 goals, conceding just 29, on their way to being crowned the best team in France.

Whether they struggle to hold onto the likes of Mbappe awaits to be seen, but the celebrations, prematurely, had already been put in place before Wednesday's victory.

On Wednesday morning, the club announced on Twitter that American rapper 50 Cent would be performing at the players' victory party. 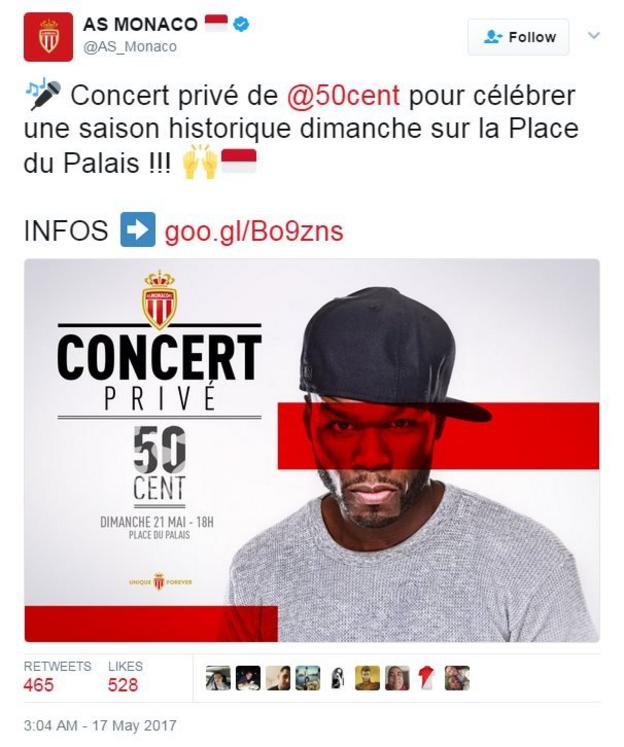 A statement on the club's website read: "The American star will come to celebrate the excellent results of Falcao's team-mates this Sunday in the Palace Square in the Principality."

Before the party can begin, Monaco will end their season with an away trip to ninth placed Rennes on Saturday.