Winning the Europa League to qualify for the Champions League would be the "perfect" end to Manchester United's season, says manager Jose Mourinho.

The Red Devils survived a late scare against Spanish side Celta Vigo to join Ajax in the 24 May final in Stockholm.

Mourinho fears Ajax, who finish the Dutch season on Sunday, will be better prepared after a 12-day break.

"This season has been so difficult, so if we manage to win the Europa League it will be amazing," he said.

"It means a chance to win a trophy and the opportunity to be back in the Champions League."

Celta, needing two goals, levelled on the night through Facundo Roncaglia to set up a tense final few minutes.

And Celta striker John Guidetti scuffed a golden chance to put the visitors through to their first major European final with the final kick of the game.

Mourinho has prioritised winning Europe's secondary club competition, which guarantees a place in next season's Champions League, in his debut season at Old Trafford.

United have three Premier League games left before they can fully focus on their seventh European final.

The Red Devils, who are sixth and four points adrift of Manchester City in fourth, visit second-placed Tottenham on Sunday.

Mourinho's side also face a trip to Southampton before rounding off their campaign with a home game against Crystal Palace.

The Eagles, who could still be fighting for their top-flight survival, visit Old Trafford three days before the Europa League final.

"Ajax's league finishes Sunday," said Mourinho. "They have 12 days to prepare. We have three games and three days.

"Hopefully Palace have nothing to play for because I will make a lot of changes."

'United had one chance'

Celta coach Eduardo Berizzo bemoaned the fact United scored with what he said was their "one chance".

"We performed much better than United did at our place," he said. "We possibly deserved to get through.

"Given the huge gap on all levels between the clubs, we managed to bridge that gap.

"I want my team to play the way I live life. We express ourselves through attacking football. I think our opponents wanted to break up our fluidity."

'Off the cuff has gone' - analysis

"Manchester United have always been known as entertainers, but I think they showed against Celta Vigo what they are now, which is a well-disciplined and well-organised team - the bit of them that was off the cuff has gone.

"United were set up defensively and playing on the counter-attack, and doing that they are never going to score a lot goals. You can see why they have struggled to beat teams at Old Trafford this season.

"Yes, results and trophies are what matters to Jose Mourinho, and his side have won the tie and are into the Europa League final, but the way they did it was not very entertaining.

"Trophies are brilliant to lift and they go in the cabinet and add to a club's history. You can look at them and say a team were winners but they do not tell you how well, or how badly, they played to do it.

"In the final they will be playing against an Ajax team who play the way Ajax have always played - entertaining, attack-minded and looking to get on the front foot.

"United won't do that. They will have the same game plan as they did against Celta Vigo - Mourinho is going to set up his side in an identical way and he will not take any risks." 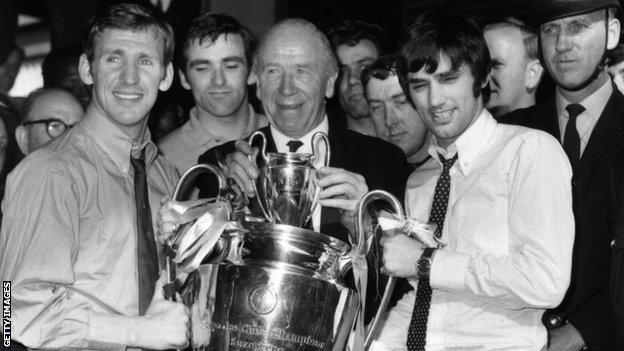 Led by Bobby Charlton and George Best, Matt Busby's side became the first English team to win the European Cup with a 4-1 win over Benfica at Wembley.

An all-English affair in late-night Moscow. Cristiano Ronaldo and Frank Lampard exchanged goals to take the tie to penalties and, after Ronaldo missed, John Terry had the chance to win it for Chelsea. However, he slipped, missed, and Edwin van der Sar then saved from Nicolas Anelka.

Ronaldo's final game for United ended in defeat as Samuel Eto'o and Lionel Messi scored to give Pep Guardiola's Barcelona victory in Rome. 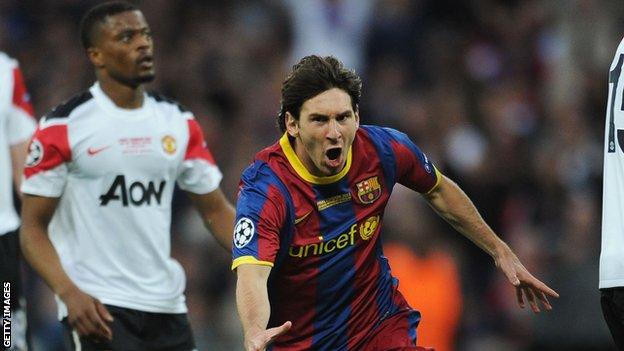 A repeat performance from Guardiola's Barcelona as United were outclassed at Wembley. Lionel Messi, Pedro and David Villa scored and Sir Alex Ferguson described Barca as the best team he had ever faced.