Hull dropped into the relegation zone as they suffered a first home defeat under Marco Silva against relegated Sunderland.

The hosts created several chances, only for Lazar Markovic and Abel Hernandez - most notably - to be denied by impressive away keeper Jordan Pickford.

Sunderland took advantage to go ahead through Billy Jones' close-range diving header after John O'Shea's flick-on from a corner.

And the Black Cats sealed their first win in 11 league matches when Jermain Defoe converted from close range.

Hull fell to 18th place after Swansea beat Everton 1-0 later on Saturday to move one point above the Tigers.

Follow all the post-match reaction from Saturday's Premier League matches

The turnaround in Hull's fortunes since the arrival of former Olympiakos boss Silva has been quite remarkable, giving them more than a fighting chance to retain their top-flight status.

The Tigers had taken 19 points from a possible 21 in the Portuguese boss' seven previous matches at the KCOM Stadium and had identified this game as one which they must win.

The home side worked hard, as you would expect, but lacked confidence and ingenuity in the final third.

And when they did manage to find the target, they were denied by the excellent Pickford.

On-loan Liverpool midfielder Markovic saw a thumping header tipped over by the England Under-21 international, who then stopped Hernandez's sweeping shot from Andrew Robertson's left-wing cross at his near post.

The nervy home crowd provided an atmosphere more of hope rather than expectation from almost the first whistle, and that pretty much turned to resignation after Jones put Sunderland ahead.

"The dressing room is down, we're not happy," said left-back Robertson. "It is not good enough to lose 2-0 at home to a team that has just been relegated." 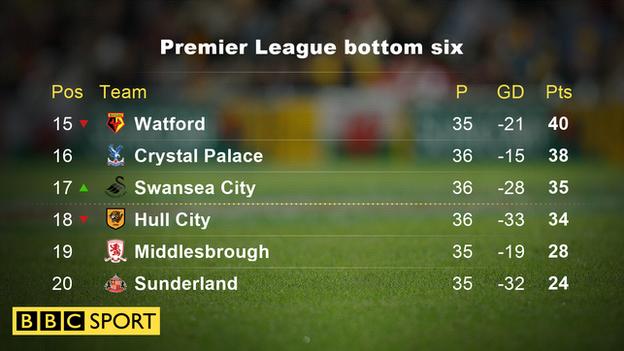 Sunderland might have already been consigned to Championship football next season by last week's defeat against Bournemouth, but the Black Cats knew they could still have a major influence on who would join them.

David Moyes' men might have hampered Hull's hopes on Saturday, but they can also help the Tigers next weekend when they host Swansea at the Stadium of Light.

If the Black Cats show the same level of fight and determination then Hull's cause might not yet be lost.

It is an attribute that has been missing for most of a woeful season, but they finally gave their 2,000 travelling fans something to cheer with a first win since 4 February.

Moyes says he will remain in charge next season when the Wearside club bid to bounce straight back up and, although there is likely to be a big turnover in playing staff, the Scot will have been encouraged by the energetic performance of young midfielder George Honeyman as he plots the rebuilding process.

"After being relegated, players have to stand up and show some pride for the club, and today they have done that," said Moyes.

"We had a really good team performance. If we had shown the character and level of performance today throughout the season we'd have many more points."

Man of the match Pickford like 'a young Joe Hart'

One man who may not be at Sunderland next season - and not because Moyes does not want him - is Pickford.

The 23-year-old goalkeeper has been the shining light in a gloomy season, producing a number of impressive performances which led to a nomination for the PFA Young Player of the Year.

Unsurprisingly he reportedly interests a host of top-flight clubs who could tempt the Black Cats into selling with a big-money summer bid.

Moyes remains confident Pickford will not leave - warning potential suitors that would have "to pay the price".

Against Hull, Pickford showed again why he is rated as one of the country's top goalkeepers.

His performance meant Hull, following a 3-0 defeat in the reverse fixture, became the first Premier League team this season not to score against the Wearsiders.

"I remember a young Joe Hart when he started - at Everton we were really keen to sign him from Shrewsbury. That's a young Jordan Pickford, he makes saves and comes for crosses and has saved us points throughout the season," said Moyes.

"Honestly, I expect this level of performance from him on a regular basis - that's how highly I think of him."

'There was big tension in some of the team'

Hull manager Marco Silva said: "It's disappointing. We had chances to score in many moments of the game. Ultimately there was big tension in some of the team. We need to be calm in some moments.

"When you don't do this you start to lose focus and we conceded two from set-pieces. Now is the moment to rest and analyse.

"It's an important moment for us. We didn't achieve what we wanted from the match but we have two more games."

No more home comforts for Silva

Hull go to fifth-bottom Crystal Palace on Sunday, 14 May (12:00 BST). The Eagles are four points clear of City, and have a far superior goal difference.

Sunderland play their final Premier League game at the Stadium of Light - for a season at the very least - when they host Swansea on Saturday, 13 May (15:00 BST).