Manchester United boss Jose Mourinho has suggested Sergio Aguero made the most of the incident that led to Marouane Fellaini's sending off for headbutting Manchester City's striker.

Fellaini, 29, was shown a straight red in the 84th minute, seconds after being booked for tripping the Argentina star.

United held on for a goalless draw.

Asked whether Belgium midfielder Fellaini was foolish for his actions, Mourinho added: "Marouane says it was a red card because he is Marouane.

"[Referee] Martin Atkinson told me that in his opinion it is a red card, but I saw Aguero in the tunnel and no broken nose, no broken head, his face is nice as always. I am not sure…

"If Sergio doesn't go to the floor then it is for sure not a red card, but if Marouane gave him the chance to do that... I don't know, but what I do know is that we played 15 minutes with 10 men and the boys were absolutely amazing for the way they fought for the point."

Felliani has now been sent off three times since signing for United from Everton for £27.5m in September 2013.

He was previously dismissed in the goalless league draw with Hull City on 24 May 2015 as well as a Champions League tie with Real Sociedad in November 2013.

Fellaini was also sent off playing in a 1-1 draw for Everton against Bolton in the Premier League in November 2010.

'We will keep fighting for fourth place'

United remain fifth in the table, one point behind fourth-placed City and two behind Liverpool, who have played one game more.

Two of United's final five games are away at sixth-placed Arsenal on 7 May and second-placed Tottenham on 14 May.

Mourinho said his side, who are in the semi-finals of the Europa League, would continue to battle for fourth place despite a hectic schedule and a growing injury list. 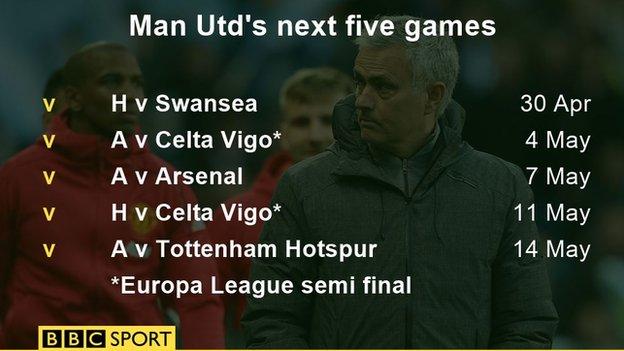 "Tonight we lost two more players, in Fellaini and also Timothy Fosu-Mensah because he has also an important injury in the last action of the game," added Mourinho.

"I think City will finish in the top four with the matches they have to play, I see them doing that.

"It's between us, Arsenal and Liverpool for fourth. We are going to try but the reality is we have a Europa League semi-final to play and lots of problems with players.

"We are going to fight."

'City need to fight a lot to win games'

Three of City's final five games are at home to Crystal Palace, Leicester City and West Brom, while they are away to relegation-threatened Middlesbrough on Sunday and out-of-form Watford on 21 May.

But City boss Pep Guardiola says his side's profligacy in front of goal means securing Champions League qualification will not be straightforward.

"It is still in our hands, which is important," said Guardiola, whose side will go third at least for a day if they win at the weekend as Liverpool are not playing until Monday evening.

"Leicester and Crystal Palace will not be easy, you've seen what Palace have done at Anfield and Stamford Bridge.

"It will be tough until the last minute but we are going to play the way we played today for the rest of the season."

'Mourinho got his tactics spot on'

Overall I think Mourinho's tactics frustrated City and he got the point he came for.

We know Jose Mourinho knows how to set a team up, defend well and play on the counter-attack. He showed that in United's win against Chelsea earlier this month, and they did it very well.

He has tried to use the same tactic against City, and I understand his game plan because if you go toe-to-toe with City then they will score three or four goals.

His thinking was that a draw was a good result, so he has come here with the aim being 'don't lose' - and it worked. 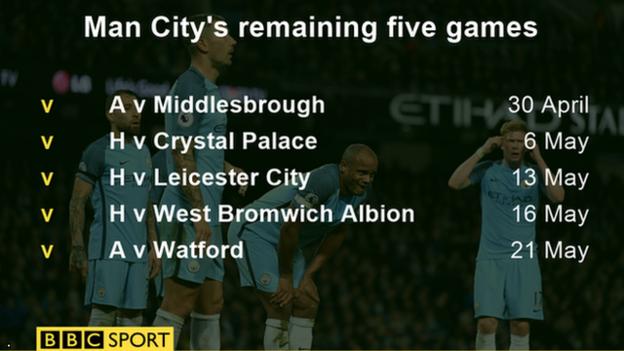 I think City are one of the best teams in the Premier League going forward but basically they lacked ideas. They missed the injured David Silva who is clever enough to see a little pass that opens up a team who are set up like that.

When they did get the ball out wide to Leroy Sane or Raheem Sterling they did not get any joy out of the United full-backs or get any quality balls into the box.

Sergio Aguero had a good chance in the first half when he hit the post but a lot of the time they were restricted to shots from the edge of the area.