The Football Association says Joey Barton's 18-month suspension from all football activities was "the shortest possible" ban it could have imposed after he breached rules on gambling.

The 34-year-old Burnley midfielder has admitted he is addicted to gambling.

But the FA said a "dismissive attitude to the rules" was also a factor.

"His addiction may have distorted his thinking in part, but it is not a compete answer for this continued conduct," the FA said.

The governing body acknowledged Barton's "difficulties are compounded by the fact betting is 'everywhere' in sport".

It also said it accepted his betting was "not calculated to make money" which it said "mitigates the gravity of his offending" and that he was not trying to "fix" matches.

"I am not a cheat, I have never tried to influence a game," Barton was quoted as saying.

However, it concluded that "the shortest possible sanction to reflect the totality of his betting breaches was a suspension from football and footballing activity for a period of 18 months".

How was the sanction decided?

The FA said that "for a single bet placed on a participant's own team to lose" its guidelines suggest that a fine and a suspension of six months to life is "appropriate".

Barton placed 15 bets on his own team to lose.

However, the FA said it had not simply calculated the total sanction by multiplying each breach with the suggested ban of six months.

After a hearing that lasted seven hours which "would not have been out of place before the High Court", it said it reached a conclusion that was "reasonable, proportionate and fair".

How much did Barton bet? 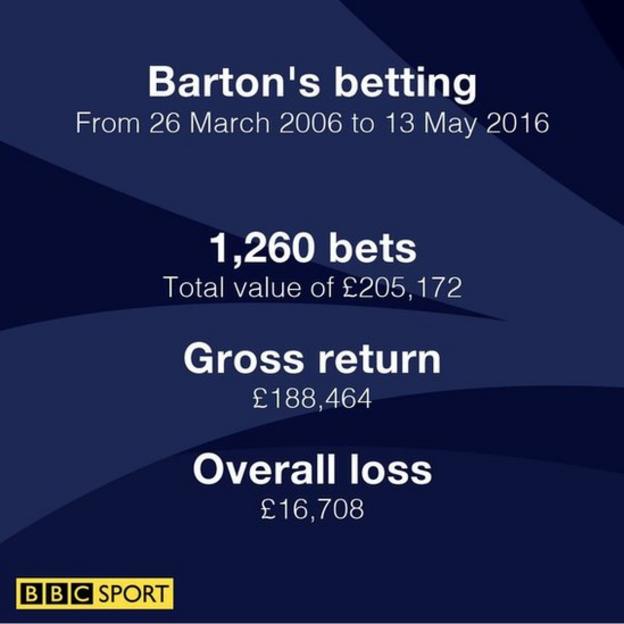 How were the bets discovered?

According to the FA, gambling company Betfair - with which Barton was a registered user - contacted them via email in September 2016, highlighting a potential breach of FA rules.

Betfair provided a spreadsheet of Barton's online gambling activity with them, and the FA's investigation was started.

However, Barton was first in breach of the FA's rules on players gambling over the 2005-06 season, when he was a Manchester City player.

In 2012, the FA wrote a letter to him highlighting concerns over him tweeting "predictions" for matches.

Barton tweeted in response that "according to the FA, I am not allowed to give my opinion on results", describing the body as "so out of touch with reality it is untrue".

The pattern of betting since released shows that Barton was gambling on matches he was not allowed to.

But it would appear the FA was not aware of this activity until it was contacted by Betfair.

What's next for Barton?

Barton plans to appeal against the length of the suspension, which he has called "excessive".

His manager at Burnley, Sean Dyche has confirmed that Barton will not be offered a new contract in the summer if the ban remains in place.

The ex-England international was in his second spell at Turf Moor before the ban, having helped the Clarets reach the Premier League in the 2015-16 season.