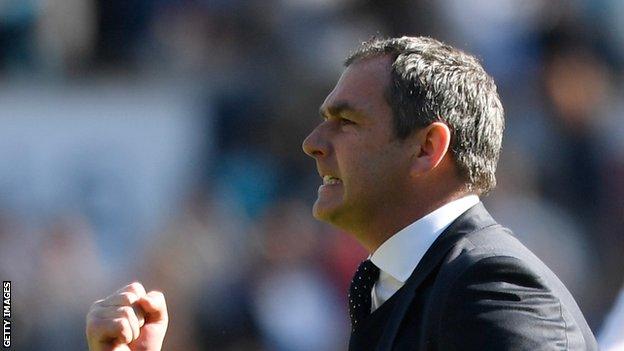 Swansea City head coach Paul Clement believes his side have "turned a corner" in their bid to avoid Premier League relegation.

They go to Manchester United on Sunday having ended a run of six games by beating Stoke City 2-1 last Saturday.

Clement said: "I am very confident. Maybe I would not have been if we had not got that good result and also the good performance."

Swansea go into the weekend two points adrift of 17th-placed Hull City who are one place above the relegation zone.

'We put it right against Stoke'

But Clement hopes the win over Stoke will be pivotal.

"I think that gives us all a bit of confidence that we have now turned a corner after a difficult period.

"We have four games to go, two away - one very difficult one coming up this weekend - and two home games.

"I am very confident, and the players are also, that we can get valuable points in the remaining four games.

"We had not been performing very well going into the Stoke game.

Relegation 'will go to the last game'

"That run lasted much longer than we all would have liked. One point in six games is clearly not very good.

"We did put it right (against Stoke) both in terms of the performance and the application which I thought was very good, particularly in the first half.

"We had that bit of luck with their penalty miss. But I think we were due it."

After Middlesbrough's victory over Sunderland and Burnley's poor form, Clement believes it is no longer a dog-fight between Hull and third-from-bottom Swans to avoid one relegation spot.

He said: "Middlesbrough had a good result (on Wednesday).

"With four games to go they will have belief, I don't think it is just two teams.

"There are still 12 points to play for, lots of football and I do believe it will go to the last game."

'A good problem to have' - Clement

Midfielder Cork is vying for a recall having missed the last two matches with a ankle problem. Swedish left back Olsson sat out the Stoke win with a hamstring injury.

Dutch midfielder Fer limped out of the Stoke match with a "dead leg" but has recovered.

With dynamic midfielder Leon Britton impressive on his first run out under Clement, against Stoke, the Swans manager will have enviable selection decisions.

"It's a good problem for me to have, with injured players coming back," he said.