Manchester City failed to reach the Women's Champions League final, despite Carli Lloyd scoring the only goal of their semi-final second leg in Lyon.

City, trailing 3-1 on aggregate, needed at least three goals at Stade de Lyon to progress, but failed to get a shot on target before the break.

Jill Scott and Lloyd both tested Lyon's Sarah Bouhaddi before a stray pass from the keeper allowed Lloyd to rifle home.

In a tense, physical second half Lyon did enough to prevail 3-2 on aggregate.

The win at the home of the French and European champions brought an end to the Sky Blues' maiden Champions League campaign, but they are already assured of a spot in next season's competition after winning the Women's Super League title in 2016.

With a back four made up of three England internationals bound for Euro 2017 in July, they did well to quell the French attack, spearheaded by Eugenie Le Sommer, which caused them so many problems in the first leg. 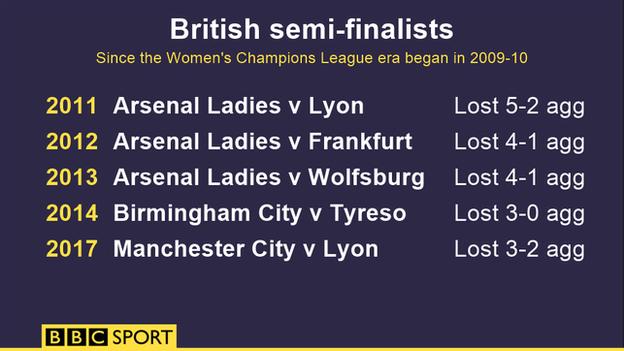 Le Sommer had an effort ruled out for offside in the second half, and the biggest scare City had before Lloyd's goal saw Karen Bardsley scramble to ensure Steph Houghton did not concede an own goal.

Even with two-time Women's World Player of the Year Lloyd headlining their Champions League bid, and with eight of the Lionesses who are headed to Euro 2017, the Citizens failed to become the first British team in 10 years to reach a European final.

No British women's side has reached a final since Arsenal lifted the old Uefa Women's Cup in 2007, and City are the third different British club to exit the Women's Champions League at the last-four stage since the competition was rebranded in 2009-10.

Lyon, who are through to their sixth Champions League final in eight seasons, will meet Paris Saint-Germain in Thursday, 1 June's final in Cardiff after their 5-1 aggregate win over Barcelona in the other semi-final.