Celtic wrapped up their sixth consecutive title earlier this month and are 33 points clear of Rangers in third place, with five games remaining.

On Sunday, Celtic swept their Glasgow rivals aside 2-0 to reach the Scottish Cup final.

"If Rangers are going to compete with Celtic, there has to be a huge investment," said Henderson.

"£50m, solely for players. It might be an idea for another investor, if there is another investor who could be brought into the club who is interested in putting money into football. It is certainly needed.

"I am not privy to anything that goes on in the business side of it but if it is going to take someone else to be added to what is already at Rangers, prepared to invest the money, then maybe it is time that the board sit round the table and discuss it with other people.

"You are going to have the same situation that you have just now if they don't do that."

The 73-year-old was dismayed by the limp showing from his old team at the weekend.

"The fans at least expect an enormous effort from players wearing the blue jersey," he said of the Hampden defeat.

"They accept that Celtic are a better team just now, but they shouldn't be a better team with effort and that was disappointing for the fans who have put up with a lot for a long time."

Henderson believes it is over half a century since there was such a chasm in quality between the two rivals, who meet again on league duty at Ibrox on Saturday.

"At that stage there was a huge gulf between Celtic and Rangers.

"We were far in front but then along came the genius Jock Stein [Celtic's European Cup winning manager]. The gulf today is the same as before Jock Stein came.

"We were always very confident of beating Celtic. Today, I don't think there is a Celtic player who if they are going out and putting a shift in, would fear getting beat by Glasgow Rangers." 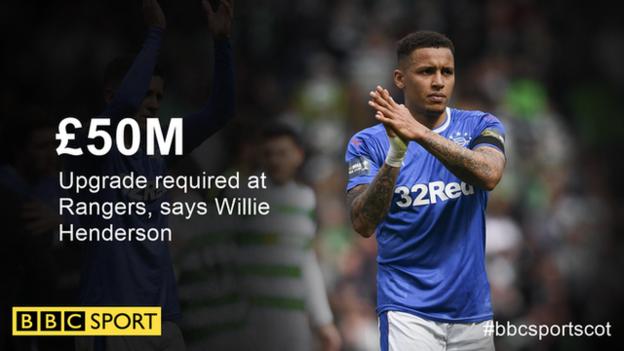