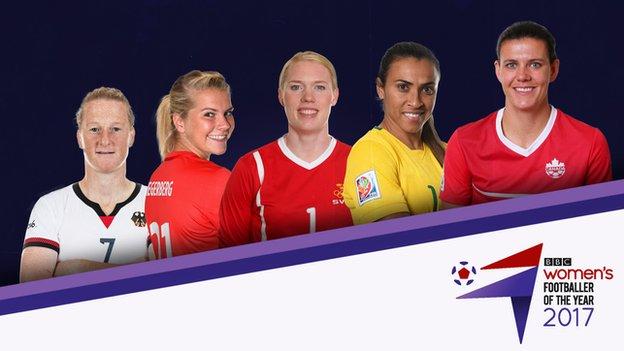 Voting for the BBC Women's Footballer of the Year 2017 has now closed.

Fans from across the world have been voting for their favourite since the five-player shortlist of Melanie Behringer, Ada Hegerberg, Hedvig Lindahl, Marta, and Christine Sinclair was revealed on 30 April.

The BBC Sport website will also carry the announcement.

Here we look at the five contenders vying for the BBC World Service honour, which is in its third year.

Behringer won Olympic gold with Germany at Rio 2016, finishing as the tournament's leading goalscorer with five goals and completing her set of every piece of major international silverware.

She ended her 11-year Germany career with that victory, having already won the 2007 World Cup and the 2009 and 2013 European Championship.

She helped her German club Bayern Munich secure back-to-back Bundesliga titles in 2016 and was nominated for the Fifa World Player of the Year award 2016.

Hegerberg was part of the Olympique Lyonnais treble-winning side in 2015-16, claiming the French Division 1 league title, Coupe de France and Champions League.

She was top scorer in the French league (33) and Women's Champions League (13) that season. She scored more goals (18) than Real Madrid and Portugal forward Cristiano Ronaldo (17) in Uefa competitions in the calendar year of 2016.

Lindahl was the hero in two penalty shootouts for Sweden at the Rio 2016 Olympics, helping her team win the silver medal.

She joined Chelsea Ladies from Swedish side Kristianstads DFF in December 2014 and shone in her first season there, winning the Women's Super League title and the FA Women's Cup. An ever-present in the WSL in 2015, she conceded the fewest goals in the division (10).

Lindahl has been named Swedish Women's Goalkeeper of the Year on five separate occasions and played for her country at three World Cups, three Olympic Games and several European Championships.

Marta is arguably the most famous female footballer of the last 20 years, having won Fifa's World Player of the Year award five times in a row between 2006 and 2010.

For the Brazil forward, 2016 will stand out as the year she led out her country at her home Olympics in Rio. One of eight Olympic flag-bearers at the opening ceremony, she also helped her side finish fourth in the tournament.

Marta, who champions women's football across the globe through her ambassadorial work, left Swedish side FC Rosengard in April to join the recently created Orlando Pride in the United States.

Under her captaincy, Canada reached their highest ever Fifa ranking of fourth, while her National Women's Soccer League club side Portland Thorns topped the table after the regular season in the United States, to claim the NWSL Shield.