Real Madrid scored a late winner to beat Valencia and take another step towards the La Liga title.

Real stay second in the table behind Barcelona, who beat Espanyol 3-0 later on Saturday.

However, Real will claim the title if they win each of their remaining four league matches as they have a game in hand on Barca.

Zinedine Zidane made nine changes to the Real side that beat Deportivo La Coruna 6-2 on Wednesday, with Ronaldo and Luke Modric among the returnees. 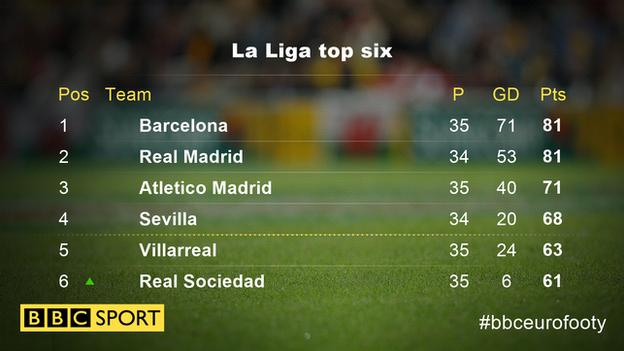 It was also the Portuguese's 367th league goal, surpassing England, Tottenham and Chelsea striker Jimmy Greaves, who scored 366 goals between 1957 and 1971.

The home side increased the pressure after the break, forcing Valencia to concede a penalty after Parejo brought down Modric, but Alves got down quickly to save Ronaldo's low strike.

Parejo's free-kick looked to have ended Valencia's four-match losing streak but Brazilian full-back Marcelo kept his composure to curl the ball beyond Alves from 18 yards out.

Real next face city rivals Atletico on Tuesday in the Champions League semi-finals, while 12th-placed Valencia host bottom-of-the-table Osasuna on Sunday 7 May.

'We'll have to dig in until the end'

Real Madrid boss Zinedine Zidane: "Valencia kept playing their game and we couldn't find the second goal to kill the game off. We're going to have to dig in until the end.

"If you don't finish the game off, you're going to struggle. We had chances to close the game out earlier, so that's something we can still improve on.

"It's true that we had half-an-hour when we slipped into our comfort zone, but that changed after the Valencia goal."

Race for the La Liga title