Lionel Messi scored his 500th Barcelona goal in the 92nd minute at the Bernabeu to send the visitors top of the league, although Madrid have a game in hand.

It was only Barca's second win in five games, having lost in the Champions League quarter-finals to Juventus.

"It will be tight until the end," said Enrique.

Barcelona are level on points with Real Madrid, but hold the better head-to-head record after a 1-1 draw at Nou Camp earlier in the season.

"These are demanding games that require maximum physical and mental preparation." added Enrique, who will leave the club at the end of the season.

"The fact that we made it 3-2 in the 92nd minute makes it a gargantuan morale booster." 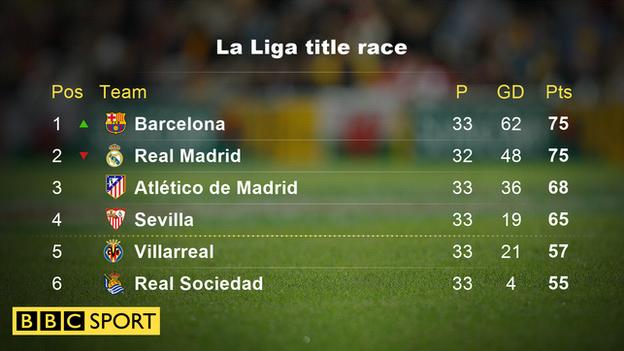 Messi's last-gasp goal came with Real, down to 10 men after Sergio Ramos was sent off, going in search of their own winner.

Real have not won La Liga since 2012 but boss Zinedine Zidane feels, with a game in hand, the title remains in his side's hands.

"I'm not saying we lost our heads but with the scores level and with 10 men, we pushed very high up and that's dangerous, so we've paid for it in the end," said the ex-France midfielder.

"I'm not going to blame my players. We always try and win the game and we just didn't manage it today.

"We've lost three points and we're disappointed because over the course of the game we didn't deserve to lose."