Tottenham ensured they remained just four points behind Premier League leaders Chelsea, and confirmed they would finish above arch-rivals Arsenal for the first time since 1994-95, with an impressive north London derby win at White Hart Lane.

Chelsea's 3-0 victory at Everton put the pressure on Spurs - but they responded in style with a ninth successive league win to continue their best sequence since October 1960, when they won 13 games in a row.

The match was decided with two goals in just over a minute, Dele Alli scoring his 21st goal for Spurs this season with a close-range finish in the 55th minute before Harry Kane netted from the spot after he was fouled by Gabriel.

Arsenal, whose top-four hopes are in serious jeopardy as they remain six points behind fourth-placed Manchester City with a game in hand, were only spared a heavy defeat in the last derby at this stadium in its current incarnation by a magnificent display from keeper Petr Cech. 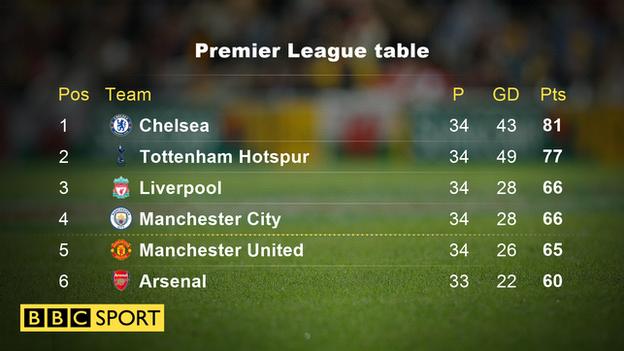 Spurs refuse to be 'Spursy'

Spurs might have been forgiven for entering this game with an air of resignation after Chelsea restored their lead - albeit temporarily - to seven points with victory at Everton.

It took them 45 minutes to perhaps clear their heads, although they had the best chances of the first half through Alli's header and Christian Eriksen's side-foot effort against the bar, before they demonstrated the quality and development that has characterised their season.

Manager Mauricio Pochettino clearly reminded his players of what might still be at stake at half-time, and they emerged at full throttle and maximum physicality to overpower Arsenal and win the game with that quick-fire one-two.

It demonstrated that, while the odds may be against them, Spurs will chase Chelsea to the wire waiting for a slip, no matter how unlikely that might be given Antonio Conte's side have a favourable run-in.

In the past, even as recently as last season, they have been given the tag of being "Spursy" - falling over when it mattered, even finishing behind Arsenal last season after a 5-1 loss at relegated Newcastle United on the final day of the campaign.

No such accusations can be levelled at this team.

Spurs travel to West Ham United on Friday, when they could reduce the gap to one point before Chelsea face Middlesbrough at home the following Monday, before welcoming Manchester United to White Hart Lane.

Given their form and strength, it is hard to see Pochettino's side losing any game - they look like a side that will keep Chelsea right on their toes until the final phase of this season.

Pochettino looks to be establishing the platform for a golden future at White Hart Lane, while Arsenal counterpart Arsene Wenger is trying desperately to recreate the glories of the past.

Pochettino has a young, powerful, talented team with a strong English foundation, while Wenger presides over an Arsenal group that is a pale shadow of those of even recent vintage that may not even offer the traditional place in the Champions League to console him.

The Gunners look flimsy and lacking in presence, and if Wenger stays at Emirates Stadium, which looks likely, he faces a formidable rebuilding task.

Pochettino has moved Spurs into a position where quality additions and increased depth to an outstanding first XI will be his priority, but so many of the pieces are already in place.

The irony, of course, is Arsenal are the club in north London with the chance of tangible success after reaching the FA Cup final - a task beyond Spurs as they lost to Chelsea in the semi-finals.

But, on the evidence of this game, and over the season, it is Spurs who can look forward with greater optimism.

Spurs and Arsenal moved to add power and stability to their midfield in the summer with the signings of Victor Wanyama and Granit Xhaka respectively.

There is no question who got the better deal.

Wanyama, an £11m buy from Southampton, stamped his presence all over midfield here with his imposing frame and ball-winning ability.

Xhaka, in contrast, was little more than a liability with his poor challenges and wayward distribution, again looking well short of the quality expected from a player bought for in the region of £30m.

It was a midfield battle that was this match in microcosm. Spurs were simply too good for Arsenal.

Man of the match - Victor Wanyama

"It was a very important game and it was a complete performance. We were better in the second half, putting on more pressure and creating more chances. The race for the title is down to four points and we will see what will happen."

Arsenal boss Arsene Wenger: "We did lose the game in a very quick space of time, and after that it took us time to recover.

"Spurs deserved to win, we have to accept that and analyse it. It is very disappointing, but the target at the beginning of the season is not to finish above Spurs, it is to win the league.

"They deserve it. We have a cup final to play, we have to fight for a place back in the top four.

"We couldn't afford to lose the game. We didn't score, we didn't score at Palace or West Brom. We have to play more and create more than we did."

Nine on the bounce for Tottenham

Tottenham travel to West Ham on Friday while Arsenal take on Manchester United at Emirates Stadium on Sunday.

Shots on Target
Home11
Away4