Sunderland's 10-year stay in the Premier League ended as Bournemouth scored a late winner at the Stadium of Light.

The result coupled with Hull City's draw at Southampton means David Moyes' side are 13 points behind the Tigers with four games left.

The defeat, Sunderland's 23rd of the season, means the Black Cats are relegated from the Premier League for a joint-record fourth time in Moyes' first season in charge.

The Norwegian had also gone close in the 20th minute, but his shot rebounded off the post and crossbar and into the arms of Jordan Pickford.

Bournemouth goalkeeper Artur Boruc saved from Jermain Defoe in the first half, and Fabio Borini and George Honeyman in the second, but the Black Cats failed to sustain any real pressure.

A run of remarkable survivals comes to an end

Sunderland needed to at least match Hull's result against Southampton to survive another week and were doing so - despite another lacklustre performance - until the 88th minute.

Southampton won a penalty at St Mary's in the closing stages which, if converted, would have seen Sunderland survive for now - but Eldin Jakupovic saved from Dusan Tadic.

Seconds earlier, Moyes' side had been hit on the counter for the winning goal, with Fraser sprinting clear before finding the in-form King, who made no mistake to score his 12th goal of 2017. 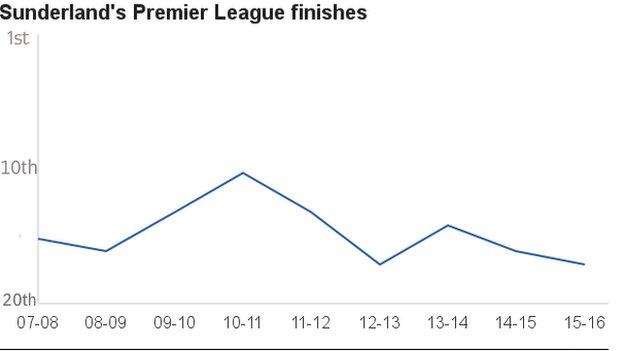 Sunderland again failed to score, for the 18th time in 34 league games this season, with just five of their 17 shots on target and few clear opportunities created.

The club have made a habit of remarkable survivals in their time in the Premier League, but the Black Cats' luck has run out and Moyes is relegated for the first time as a manager.

Little has gone right for Sunderland since Sam Allardyce - who saved the club from relegation last season with just one defeat in their final 10 games - was named England manager in late July.

Moyes was named as his replacement a day later but, after just two games of the season, told the fans to expect a relegation battle.

The Scot was left with little time to bring in summer recruits but those he did bring in - the majority his former players at Manchester United and Everton - have disappointed.

Their first win did not come until November but they followed it with three victories in their next six games in a brief glimmer of success, largely built around Defoe's goals.

Since then, Sunderland have won just once in 17 games and Defoe is without a goal in 10 club games.

Black Cats fans have grown increasingly frustrated at Moyes' results, and what they consider his negative attitude and demeanour throughout the season, with chants for him to leave being heard in recent weeks.

Bournemouth boss Eddie Howe said his side were not at their fluent best in the game but the win moves the Cherries up to 10th in the Premier League and onto 41 points.

While it does not mathematically ensure survival, Bournemouth are almost certain of a third successive Premier League season in 2017-18.

They are also just a point behind the 42 points they achieved in their debut top-flight season with three games left.

That total saw them finish 16th and an improvement this year would see Howe lead the club to their highest league finish for a fourth season in a row.

The comparison to Sunderland was stark, as the away side, while not at their best, looked much sharper and dominated the ball with 59% of the possession.

'I feel for the supporters' - manager reaction

Sunderland manager David Moyes: "It summed up our season. We played well for long parts. We had four or five good opportunities and did a good job.

"We're all disappointed and I feel more for the supporters. We take collective responsibility from top to bottom.

"We'll dust ourselves down and see what we have to do.

"I don't know what words you can say to the players. I told them they fought for the jersey. Because of that it's difficult to fault them.

"We're disappointed with the level of performance all season. We'll do everything we can to get it right."

"Josh King has worked incredibly hard and shows great attitude every day. Technically he is a great player and it is nice to see him score.

"The second season is harder, having gone through it. The first season is a novelty, in the second there is expectation.

Man of the match - Joshua King

With nothing but pride to play for, Sunderland travel to Hull on Saturday, 6 May (15:00 BST) while Bournemouth host Stoke at the same time.