Watch the FA Cup semi-final between Chelsea and Tottenham live on BBC One and the BBC Sport website from 16:50 BST on Saturday.

He joins Gary Lineker, Alan Shearer and Jermaine Jenas at Wembley on Saturday for BBC Sport's live coverage of the Blues' FA Cup semi-final against Tottenham.

Lampard explains what could decide the battle of the Premier League's top two - and why Tottenham midfielder Dele Alli and Chelsea winger Eden Hazard are the most likely match-winners.

'The magic is in Alli's movement'

I've been watching Alli closely this season and he clearly has great technical ability - you can see that from his touch and from his finishing.

The magic for me, though, is his movement to get into the box without being marked.

If you watch him during games, he is always very aware of what is around him - his head is always moving and he is waiting for the right time to make his run.

That intelligence is the special thing he has that sets him apart.

Some of it is natural, but other parts of it you work on, which is why I think he will get better and better as he gets older.

That was the case with me - I worked it out. I was never the quickest player, so I knew I had to get an edge somewhere else around the box.

You only need a yard and I used to wait for people to either take their eye off me, or to switch off.

Midfield players generally don't like running back and defending around the edge of the box so I always had the idea that, if I could get in and around there and make my move at the right time, then I would get my yard.

With experience, it is something you get even better at. Alli has only just turned 21, so he can certainly do the same.

'Cut off his service' - how Chelsea can stop Alli 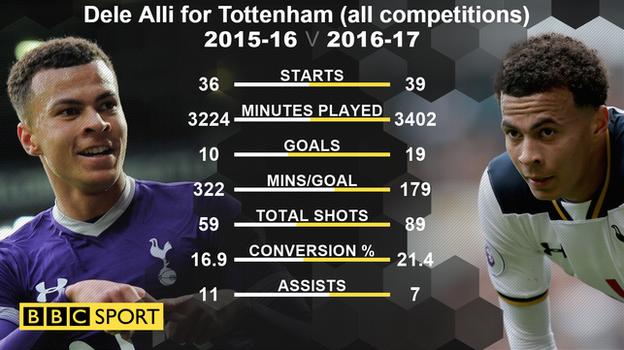 We have already seen a big improvement from Alli this season, and part of that is down to him being higher up the pitch.

He has developed into a number 10, playing behind the main striker, rather than being a number eight and a more traditional midfielder who likes getting forward.

He is so clever with his movement and clinical with his finishing, so he had to be given that free rein.

Alli is a highly intelligent player - the kind of number 10 we have been craving in England for years, and bemoaning the fact we have not got one. Now he has really arrived.

The reason he is so effective is because knowing what he does is one thing - but stopping him doing it is completely different.

It is a big ask for Chelsea to nullify Alli completely on Saturday but it will be critical to the outcome of the game.

For that to happen, it will be down to whoever plays in midfield for Chelsea - potentially N'Golo Kante and Nemanja Matic - to stop the service into him.

If Alli gets the ball in an attacking area, then he is dangerous whatever he does, whether it is with long shots if he is behind Harry Kane, or if he is running past Kane and arriving in the box from deep.

You cannot afford to give him any space at all and I am sure restricting that will be an absolute priority for Chelsea on Saturday.

They will obviously have to deal with Kane and what he is doing up top too, but behind him Alli will play a decisive role if the Blues allow him to.

'Hazard has come back even better than before'

Alli and Kane are not Tottenham's only threats, of course.

Something you have to give Spurs a lot of credit for is the number of goals they get from right through their team - but Chelsea have individual match-winners too.

I think Hazard is the outstanding player in the Premier League at the moment, closely followed by Alli. Chelsea are no one-man band, but he is the most likely to make a difference.

I know Eden pretty well after playing alongside him for a couple of seasons and he relishes these big games.

He sees them as a stage for him to show his ability and going into the semi-final I think he will be quietly confident - but still very confident - that he will have a big impact.

I think he has matured this year in particular after what was a difficult season for him, where he got some criticism. He has come back even better than he was before.

For me, he is now moving into the very top bracket of players anywhere in the world.

Barcelona's Lionel Messi and Cristiano Ronaldo of Real Madrid are out on their own but Hazard is moving into that group behind them and, at 26, he is young enough to keep improving and narrow that gap.

Saturday's semi-final is between the two best teams in the Premier League.

As the table suggests, Chelsea are the only team who have played better than Tottenham this season, and there are definite similarities between them.

Both teams are well drilled and very well coached. Both have total trust in their systems, which is something their managers have to take credit for. 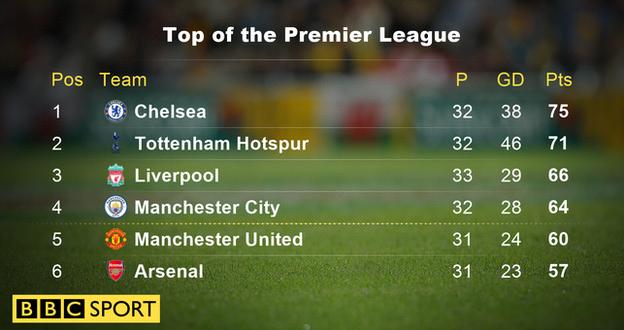 If I had analysed Tottenham a few years ago, I would have said 'good players, and they might have a good cup run - but they are not going to win the league'.

Now, with the players they have got and the way they are playing, they have elevated themselves into a situation where they are contenders.

It means they need to win trophies. That is pressure, but it is a good kind of pressure.

In their situation, they have to look at what can they win so they have something to show for this season - and the FA Cup is still their best chance of silverware.

Many of Chelsea's players were at the club when they won the title two years ago, but this Tottenham team is still waiting for their first major honour.

Whatever you win, your first trophy gives the whole club confidence. At Chelsea, when we won the League Cup in 2005, it made us believe we could be winners.

Jose Mourinho has to take credit for that. When he took over in 2004 he told us that we were winners in waiting, but we needed to cross that last hurdle to actually do it.

Being a team that wins things is not just down to how you perform on the pitch, although that is obviously the most important part.

It is also about the mentality around the club every day and I think that changes once you get some silverware. You get the taste of it - and you want more.

I was 25 when I won my first trophy. It changed me because from then on I demanded more of myself - and it changed Chelsea as a club.

Spurs have won trophies down the years, of course, but nowhere near enough compared with Chelsea.

Tottenham went close to winning the title last year but there are only so many times you can go close. Now is their time as a team where they have to make that breakthrough.

The improvement of individuals in this Spurs team has been huge in the past couple of years, but winning something is the next step they have to take.

They have to, if they want to keep the likes of Kane and Alli on a long-term basis.

'There was an extra edge whenever we played Spurs'

Looking back at my FA Cup semi-finals, I did not really enjoy any of them in the moment because there was too much pressure. I could only do that at the final whistle, if we had won.

I hope the teams don't cancel each other out on Saturday because semi-finals can become nervy occasions where you are afraid of defeat.

But there are enough good individuals on the pitch for both teams to make things entertaining, no matter what.

That doesn't mean there will be lots of goals because they are two pretty evenly matched teams, but I think we are going to have a close game and an enjoyable one too.

The biggest games are highly pressurised situations and Tottenham did not handle things well when they played on a big stage at Wembley in the Champions League this season.

But I think Saturday will be different. A derby in a semi-final at Wembley creates a very different atmosphere.

You know in a normal game - a league game - most of the time losing is not the end. There will be more opportunities to come later in the season where you can put things right.

But a semi-final is a one-off and I played them on a knife-edge - particularly against opponents like Spurs.

I know the feelings between the clubs - from the players to the fans - because whenever I played for Chelsea against Tottenham there was an extra edge to it.

There was a hostile atmosphere whenever we went to White Hart Lane or they came to Stamford Bridge, so I know this will not be your bog-standard semi-final - far from it, in fact.