The defending champions are level on points with Real Madrid, who beat Deportivo la Coruna 6-2 later on Wednesday and have a game in hand.

Roberto Torres gave the away side hope, but further strikes by Gomes and Messi, two from Paco Alcacer and Javier Mascherano's first Barca goal followed.

After Messi's 12th-minute opener, fans held up their shirts as they mirrored the Argentine's celebration of a 93rd-minute winner - his 500th goal for Barca - at Madrid on Sunday.

That 3-2 victory re-opened the title race in dramatic fashion, but Barca must hope Madrid slip up in one of their five remaining matches if they are to defend last season's success.

After Torres curled past Marc-Andre Ter Stegen just after half-time, they were buried by four goals within 20 minutes.

Messi's second of the night was the pick of the bunch as he skipped past a series of challenges and fired home, shortly after Gomes had put Barca 3-1 up with his second, tapping in after Gerard Pique's header struck the post.

Argentina forward Messi has now scored 49 goals this season in all competitions, from 48 games.

Mascherano's first goal in 319 games for Barca was thumped home from the penalty spot after Messi had been withdrawn.

As he ran up to take it, the Barca bench watched on in excitement, with Luis Suarez - rested for the match - barely able to contain his glee.

"At first I tried to get out of it but under pressure from my team-mates and the crowd I decided to take it on," Mascherano said.

"It would have been a fun moment to remember in years to come had I missed it. I wasn't sure about it at all but it was difficult to say no to my team-mates."

It was the 32-year-old's third goal in senior club football, having scored twice during three years at previous club Liverpool - who he left for Barca in 2010.

"The fans behind the goal were chanting for Mascherano to take it," manager Luis Enrique said. "I am happy for him - he is a key player for the club and he has shown that down the years." 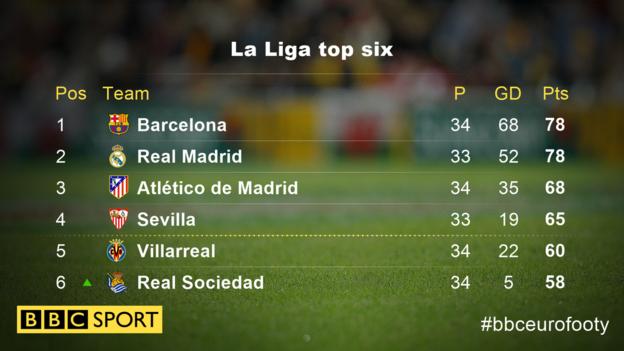