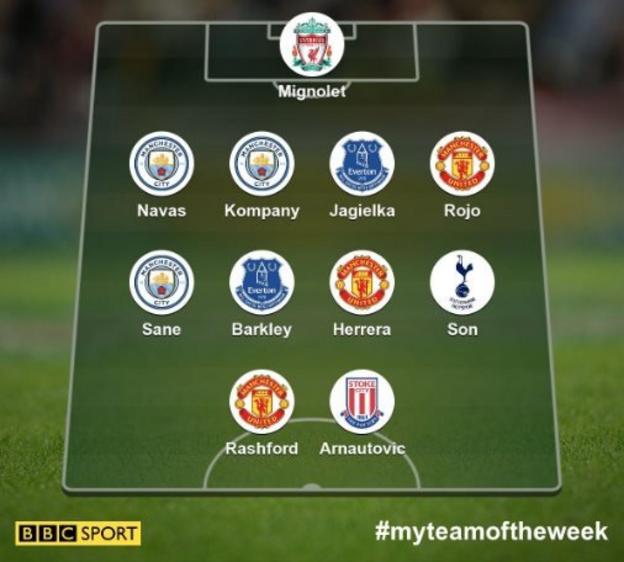 Manchester United did Chelsea's title rivals Tottenham a favour and kept up their own pursuit of the top four with a dominant win over the Premier League leaders.

No wonder players from those two clubs dominate my team of the week.

For the second consecutive week I have picked Simon Mignolet in my team. The Belgium international made a save that won the match against West Brom and prompted manager Jurgen Klopp to hug his players in sheer relief at a result that got him out of jail.

To be perfectly honest, Liverpool should have won this game comfortably. They dominated most elements of the match and should have scored at least one more, especially when Ben Foster became obsessed with joining the Albion attack in the final minutes as if he was going to somehow provide the equaliser.

Nevertheless it has been Mignolet who has proved to be Klopp's most valuable asset in the past couple of games.

Where has Jesus Navas' form suddenly come from? In the same way Victor Moses has found a new role starring as a wing-back, Navas seems to be doing equally well, but as a genuine full-back. Navas' pace has neutralised raids down City's right side, and in attack the Spaniard seems to have found a confidence to deliver decisive balls into areas I had never seen in his game before.

Pep Guardiola finding this position for Navas, not to mention invest his faith and time in the player, has proved to be quite an innovation.

It has given the team options and, with the introduction of a fit Vincent Kompany, managed to revolutionise City's back four.

How good was it to see Vincent Kompany back and among the goals? I have seldom met a player who is more impressive than the Manchester City captain.

When he scored his first goal for the club since his return from yet another injury, the delight of his team-mates and the travelling City fans was evident.

However, it was his defensive performance that was most impressive. I said a few weeks ago that if Kompany had been playing in City's game at Arsenal this month, Shkodran Mustafi would never have scored the Gunners' equalising header from a corner - such is the Belgian's all-round aerial power and general inspiration.

Arsenal got away without feeling the effects of Kompany's influence but Southampton did not. In fact, the Saints were blown away by City's performance, which was led by the Belgian defender. Great captain, great leader, great performance.

When a centre-back scores goals in three consecutive games you have to consider whether the defender is just going through a purple patch or has a genuine knack of scoring goals. I think with Phil Jagielka it's both.

The Everton defender is certainly going through a wonderful period of scoring goals and that is because he is good at it.

His goal in the win against Burnley was absolutely superb for two reasons. Firstly because, more often than not, he times his run to perfection and gets his head on the ball and, secondly, because of his desire.

The way Jagielka responded to the initial save by Burnley keeper Tom Heaton (goalline technology said it had gone in, by the way) was striker-like, while as a defender his ability to read situations at the back has stood him in good stead all his career. A top-class professional.

It's not often I start my comments by commending a referee but on this occasion I find myself compelled to congratulate Bobby Madley on a tremendous game at Old Trafford - and so should Marcos Rojo.

There is no doubt in my mind a less considerate official might have sent Rojo or Chelsea striker Diego Costa off. If either had received their marching orders for a little 'argy bargy' in the first half it would have destroyed what was a marvellous contest and first-class entertainment.

I must say Rojo won the battle of the warriors and, actually, it was fantastic to watch him and Costa battle it out - under the watchful eye of referee Madley, who orchestrated the affair beautifully.

This kid is going to be special. It has been a long time since I've seen a young lad look so promising. He is quick, direct, loves to take players on and scores goals. If you're a player with a bright future it doesn't get better than that.

It took a wonderful save from Fraser Forster to stop the Germany international from opening his account but the Southampton keeper was only delaying the inevitable.

The football played by Manchester City for their second goal was complete and utter bliss. From the moment Kevin de Bruyne (the king of the assists) won the ball in midfield, Sane was off like a hare, racing 40 yards to support De Bruyne, who provided him with the opportunity to score.

It takes guts, desire and fitness for a player to get into that position and offer alternatives for the man on the ball. That is what Sane now offers a Guardiola team who look better every time I see them. Pep is getting this team right.

It is not often a player finds himself on the front and back pages at the same time, but that is what Ross Barkley has had to cope with these past few days. However, the way the youngster has coped with some of society's excesses has been more than admirable.

Professional footballers dealing with the occasional confrontation from a member of the public, or a crass comment from a journalist who should know better, has been an occupational hazard for years. However, none of that seems to affect Barkley.

In fact, if his performance against Burnley was anything to go by, it seemed to energise the England international. His clearance off the line from a Michael Keane header was brilliant defending.

When his goal came - and it was his goal, and should not have been credited to Ben Mee for trying to do his job and block the shot - Barkley deserved it. Precisely why the experienced Mark Clattenburg had to caution the player for celebrating his goal with the fans, bearing in mind the week he's had, I don't know. It seemed grossly unfair.

Was Clattenburg so blithely unaware of the sheer thrill his goal and performance would have meant to Barkley under the circumstances? Well, for what it's worth, Barkley has shown himself to be a real professional, in the true sense of the word.

He is the sort player who looks like butter wouldn't melt in his mouth, but Ander Herrera is capable of making life very difficult for his opponent.

When he was commissioned by manager Jose Mourinho to take care of Eden Hazard in the FA Cup tie at Stamford Bridge, it it ended very badly for Manchester United and in particular for Herrera, who was sent off. Not so at Old Trafford, where there were three massive points at stake.

Luck plays a part in most football matches and it could be argued Herrera had a large slice of it with the suspected handball that took the pace off an attempted Chelsea pass, allowing the Spaniard to produce a world-class through ball for Marcus Rashford to score.

His deflected second-half goal, which gave keeper Asmir Begovic no chance, was the final body blow for Chelsea - there was no way back for the Blues after that.

However, it was Herrera's dominance over Hazard that set the tone for United's victory. Not since Italy defender Claudio Gentile outwitted Brazil legend Zico at the 1982 World Cup have I seen a marker nullify a top-class player so completely.

Tottenham's win against Bournemouth was a walk in the park and it was Son Heung-min who led the Cherries by the nose. I must say the Lilywhites are playing some wonderful stuff at the moment but Bournemouth didn't help their cause one little bit.

There are a few players in the Tottenham set-up who have distinguished themselves this season but the most improved Premier League player in my opinion is Son. He was brilliant against Bournemouth and seldom lets Mauricio Pochettino down when called upon.

Another manager who had done a wonderful job is Bournemouth's Eddie Howe but he really must do something about his goals-against record. It doesn't help when your captain and arguably best defender cannot determine whether his team-mate had the last touch before letting the ball roll out for a corner. It was patently obvious the ball came off Harry Arter's boot. If Simon Francis thought he could kid referee Michael Oliver by letting the ball out of play then he made a big mistake.

But if that wasn't bad enough, Bournemouth had seven defenders marking five Tottenham attackers at the ensuing corner and the ease with which Mousa Dembele lost his markers to put Spurs in front was quite alarming.

From the moment Arnautovic hit the underside of the bar with a thunderous shot I knew he was in the mood to wreak havoc against Hull City. And so he did in a 3-1 win.

Arnautovic could have had a hat-trick but that did not matter because it was good to see one of the most gifted players in the league actually fancying it.

He seemed to be involved in everything Stoke did and when Xherdan Shaqiri is also on fire, watching the Potters is an absolute delight.

The ball from Arnautovic to Jonathan Walters, who eventually provided the cross for Peter Crouch to score, was simply wonderful.

I've seen lots of gifted players in the candy-red-and-white-striped shirt of Stoke over the years and Arnautovic must rank among the best of them. But sadly we just don't see enough of what he has to offer.

This lad absolutely ran Chelsea ragged. I have not seen a single player this season give David Luiz and the entire Chelsea defence such a run-around.

I have spoken before about how Manchester United must think long and hard about replacing Zlatan Ibrahimovic but I think after their game against Chelsea they don't have to be so concerned.

Rumours are rife about Atletico Madrid striker Antoine Griezmann, and others, joining the ranks at Old Trafford, and that makes sense. But United have a special talent on their hands in Rashford, and they must handle him with care.

To see this young man look so comfortable on one of the biggest stages in the world was one thing, but to see the United centre-forward destroy a world-class centre-back was something entirely different.

What is even better is that Rashford is English.