Alexis Sanchez's scrambled extra-time winner secured Arsenal an FA Cup final date with Chelsea - and ensured Manchester City manager Pep Guardiola will end a season without a trophy for the first time in his coaching career.

Arsenal showed great resilience to come from behind - and eased the pressure on manager Arsene Wenger - after Sergio Aguero raced clear of Nacho Monreal to put City ahead in the 62nd minute.

Monreal made amends with the equaliser 11 minutes later as he drilled in Alex Oxlade-Chamberlain's cross at the far post - but City were left nursing a serious sense of injustice after this disappointing defeat.

They had a goal wrongly ruled out in the first half when Leroy Sane's cross was adjudged to have gone out before Aguero and Raheem Sterling combined to turn it into the net, while Yaya Toure and Fernandinho hit the woodwork after the break.

Wenger gets his statement of intent 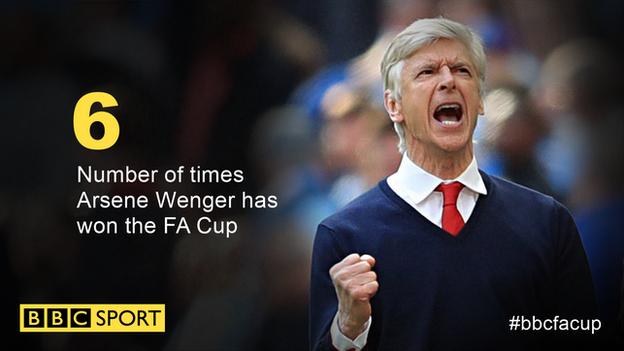 Wenger's future - and the lack of clarity surrounding it - has only been brought into sharper focus by Arsenal's recent fall outside the Champions League places.

The manager needed a statement, as did his team, to ease the growing disquiet among Arsenal fans at the prospect that he will extend his stay as manager.

Arsenal's Wembley win against Manchester City will not ease the concerns in the minds of the doubters but he can point to the victory, and the manner in which it was achieved, as evidence that he could yet be the man to take the club forward.

Victory in the final on 27 May would strengthen his and Arsenal's case for continuity, but for now there was much for the Frenchman and his players to treasure about this triumph.

Arsenal rode their luck at times - but Wenger will take that all day.

Wenger's players have been accused of not playing for him in recent months. No such accusation could be levelled here as they dug deep for victory.

The Gunners' embattled manager pumped his fists towards the skies at the final whistle and beamed with delight - he may yet achieve glory amid the worst discontent of his reign.

Manchester City will argue long and hard that their chances of reaching the final were sabotaged by a first-half decision that saw a good goal ruled out.

Referee's assistant Steve Child judged that Sane's cross had gone behind before Aguero turned it back at the far post and then Sterling made sure. Replays suggested the ball had not gone out and City were the victims of an injustice.

City will also feel Lady Luck deserted them as they lost playmaker David Silva to injury early on and saw those efforts from Toure and Fernandinho hit the woodwork.

In the final reckoning, they must also accept the brutal truth that once more they enjoyed superiority in possession and territory but could not find the ruthless touch.

Guardiola, arguably football's most celebrated coach, was brought to Manchester City to lift them to another level - and on that basis his first season without a trophy in a glittering managerial career will be regarded by many as a failure.

He has found it more difficult than he may have imagined after the seamless successes of his years in charge of Barcelona and Bayern Munich.

He must now address the problems that have undermined City this season, particularly uncertainty over the goalkeeper position, where his decision to replace Joe Hart with Claudio Bravo has been unsuccessful, and also sort out an uncertain and ageing defence.

Guardiola's main priority now is securing a top-four place and getting into the Champions League, starting with Thursday's derby against Manchester United at Etihad Stadium.

Failure to achieve that objective is unthinkable.

Manchester City return to Premier League action with a home derby against neighbours United on Thursday. Arsenal are at home to Leicester in the league on Wednesday.