We try to answer those questions and take a look at some of the other interesting stats from the weekend.

Could Alli be 'The Greatest'?

The stat: Dele Alli (40) has been involved in as many Premier League goals before turning 21 as Frank Lampard (15), Steven Gerrard (13) and David Beckham (12) combined.

He floats across the pitch like a butterfly and stings like a bee, as Watford discovered during Saturday's 4-0 defeat at White Hart Lane.

Alli's stunning opener for Spurs, scored three days before his 21st birthday, further underlined the precocious talent of the youngster who, it is worth remembering, was scoring for MK Dons against Leyton Orient less than two years ago.

That is now an incredible 19 goals in all club competitions for the attacking midfielder this season, following on from the 10 he managed in his debut season for Spurs. He has now also scored more league goals (16) this season than any other under-21 player in Europe's top five leagues.

Well, you could conceivably multiply that by two because the attacking midfielder has had a hand in as many Premier League goals before turning 21 as fellow Englishmen Frank Lampard (15), Steven Gerrard (13) and David Beckham (12) combined.

But wait, this is what former Premier League midfielder Robbie Savage had to say about Alli on BBC Radio 5 live's 606:

"What is world class? I think to be world class you have to affect big games, do it on a regular basis and win games on your own. To say he is world class now is a huge statement. Name me big games he's affected, particularly in Europe and the Champions League. Potentially yes, but is he now?"

Will the table below change Robbie's thinking?

The best team goal this season?

Manchester City coach Pep Guardiola must have had Barcelona flashbacks as he watched Sergio Aguero's goal during the 3-1 win over Hull on Saturday.

All 11 players touched the ball in the build-up, including keeper Claudio Bravo three times, as City put 21 passes together before the Argentine tapped in.

Painfully for Guardiola, the fact Raheem Sterling's cross was parried into Aguero's path by Eldin Jakupovic means the official statisticians class this one as having zero passes in the build-up.

It was a stunning goal but, even if this had gone down as a 21-pass move, it still would not have featured in the top-five longest build-ups of the season.

What this does suggest, however, is that if you want to score a great team goal, Hull are the team to do it against.

Bravo - will he ever save a shot?

Opposition players scanning Manchester City's team-sheet before kick-off might be inclined to first check who is in goal.

"Brilliant. Claudio Bravo," could be how they react. After all, the 33-year-old Chile player has let in all the past seven shots on target on his goal.

He also has the worst save percentage in the Premier League season so far - stopping only 54.39% of the efforts he has faced. Crystal Palace's Steve Mandanda (58.54%, but has only played nine league games) and Swansea's Lukasz Fabianski (58.64%) have the second and third worst records.

He showed his potential at Inter Milan, but it is at Liverpool where Coutinho has blossomed.

The 24-year-old midfielder's well-taken equaliser in the Reds 2-1 win at Stoke on Saturday was his 30th in the Premier League, which saw him overtake former Middlesbrough forward Juninho as the highest scoring Brazilian in the competition's history. Parabéns!

Incidentally, former Arsenal defensive midfielder Gilberto Silva has played the most games (170) and has the best win percentage - an impressive 61.8%. Coutinho's is currently at 53.8%.

Just how boring are Middlesbrough?

Yes, some would say we are kicking a team while they are down - down, not relegated Boro fans - but this BBC weekly statistics piece takes no prisoners.

Middlesbrough - you are definitely not in the running for the Premier League 'Entertainers' award.

The Teesside club have been involved in SEVEN goalless draws in the Premier League this season - three more than any other side.

And their Riverside Stadium has also seen fewer goals than any other Premier League ground this season (29 - 12 scored and 17 conceded).

Fancy a flavour of the FA Cup?

Sign up for the 2017 FA People's Cup and take your chance to win tickets to the FA Cup final and achieve national five-a-side glory.

And the fewest goals at a ground was when Manchester City's City of Manchester stadium witnessed a paltry 26 in 19 games during the 2006-07 season. Manager Stuart Pearce was sacked at the end of that campaign. 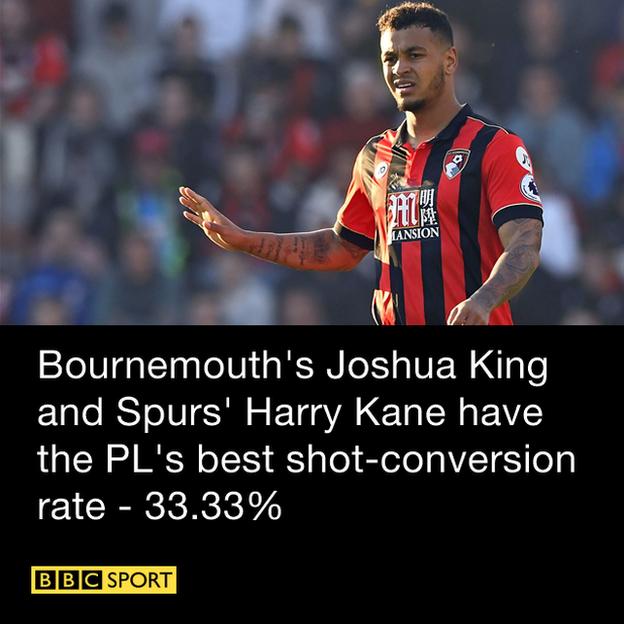 Bournemouth's Norwegian forward Joshua King is proving to be a thorn in the sides of the Premier League elite.

In fact, the 25-year-old's strike against Chelsea in Saturday's 3-1 defeat means he has now scored eight goals against teams currently in the top 10 - the most of any player featuring in a team outside the top half.

And only Everton's Romelu Lukaku (13) and Tottenham's Harry Kane (11) have scored more Premier League goals in 2017 than King, who has 10 - level with Spurs' Alli.

All three of those teams were relegated during those seasons.

403 comments
Back to top
unknown