Everton striker Romelu Lukaku could have a big decision to make in the summer.

He is a fantastic athlete who scores lots of goals but he is still learning the game and, under the right coach and around better players, he is going to get better - the question is, where?

Everton are an ambitious club and a fantastic platform for Lukaku to continue his development but if a Champions League side come in for him and tell him he is going to be first choice, there is not much of an argument for him stay.

That is a big 'if' because he comes with a £60m price tag, but there is already plenty of speculation about Lukaku's next move.

The obvious club to splash out and throw the 23-year-old Belgian straight in the team would be his former side, Chelsea, if they were to sell Diego Costa.

Lukaku has already said he will not sign a new contract at Everton and, if he does get an offer from Chelsea at the end of the season, then it would be a no-brainer - he has to do it.

He would be Chelsea's main striker, playing in the Champions League and challenging for the title in a team which will give him lots of chances, which is exactly where he wants to be.

What he doesn't want is to be stuck on the bench somewhere. For example, if Zlatan Ibrahimovic signs for another year at Manchester United and they come in for Lukaku, then he would be thinking: why would I go there now when I won't be playing every week?

Whichever club you name, if Lukaku joins them for next season and plays 45 games, scores 25 goals and wins a trophy, then he will have made the right choice. If he doesn't, then the argument will be that he should have stayed at Everton for another year, where he will definitely play and his stock could rise even higher.

It is a case of seeing who wants him, having that conversation with them about what his role would be and making a decision. As a player it is hard to know what the right choice is sometimes, but it is not a bad situation for him to be in, really.

'He can work on his touch but goalscoring is a gift'

Lukaku is the Premier League's leading scorer with 21 goals but his hold-up play still gets criticised when people question how good he is.

I actually think his touch is OK - yes it could be better, but there are not many top-flight strikers who are brilliant at link-up play. Costa can also be a bit sloppy at times, and Tottenham's Harry Kane is probably the best at it.

In any case, it is something that Lukaku can work on, along with his awareness. He will have to - the bigger the team you play for, the more packed defences you face and the less space you have to operate in.

But he is still young - he turns 24 next month - and those are the parts of your game that you can improve.

It is not just something that comes with age either. That development comes with playing with better players, who give you better quality balls from closer range. 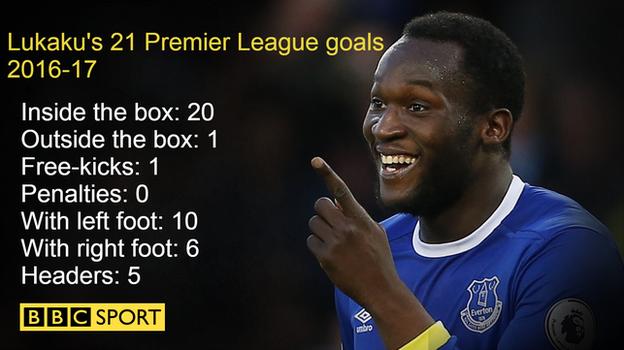 His main asset as a striker, though, is his ability to score goals - with his right foot, left foot and his head.

That is a gift, and he does it so well that I really don't think the other parts of his game are a weakness, or would be a worry for any club buying him.

A flat-track bully? So are most strikers 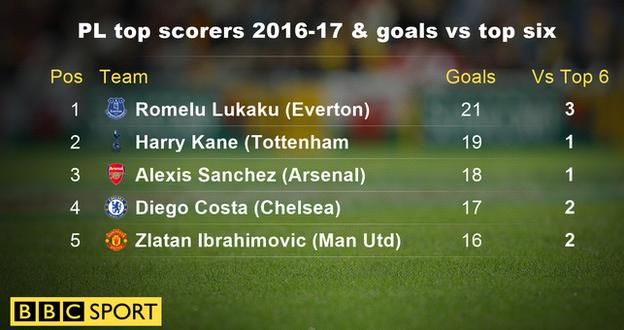 Another claim I hear about Lukaku is that he does not perform against the big teams, and it is true that most of his goals this season have come against lesser sides.

But that is true for most Premier League strikers, and there is a logical reason why.

When Everton play the top teams they do not have as much possession or create as many chances, and Lukaku is up against better defenders too.

He scored against Tottenham last month, but he is not going to go White Hart Lane and cause Jan Vertonghen and Toby Alderweireld as many problems as he does when he faces Sunderland's defence at the Stadium of Light, playing two centre-halves who are low on confidence and with Everton seeing loads of the ball.

The time when questions come is when you are a striker playing in a top team and you are not scoring against the other top teams.

But it is hard to judge Lukaku like that because he has not played against many big teams while being on an equal footing.

That is the opportunity a move to, say, Chelsea would provide him with - the step-up to play for a team that is going to give you more chances in every game, whoever the opposition.

There is nothing wrong with having that ambition. In fact, it is completely normal.

'I didn't see a Lukaku who wasn't trying for his team'

Lukaku's refusal to sign a new Everton contract has been well publicised, and it means that when he plays people are looking for evidence that he is not happy, or does not care.

I don't think that is the case, and I don't agree with the claims he did not try hard enough in Tuesday's draw with Manchester United.

The on-pitch argument that Lukaku had with Ashley Williams seemed to start with Williams asking him to chase the ball more - my understanding from watching it was that he wanted Lukaku to get across the pitch when a couple of clearances went on the opposite side to where he was standing.

What I would say in Lukaku's defence was that he was very isolated and he could not really win, especially because many of the balls up to him were generally pretty poor - there is only so much pressing you can do when you are outnumbered.

I certainly didn't see a Lukaku who wasn't trying for his team.

Yes, he lost the ball too easily sometimes, and of course that means you are going to get a volley off the players behind you, because they want a rest. "Get hold of it, man" is the kind of thing they would be shouting.

But in terms of his work ethic and his running, then it looked to me like he was giving the same physical output as I've seen from him in games where he has played well and scored.

'I had lots of rows but a handshake and a hug, and everything is fine'

Lukaku's fall-out with Williams at Old Trafford was a mountain out of a mole-hill as far as I am concerned, because that sort of thing happens all the time.

Yes, Lukaku shushing him was a little bit condescending, but I have been shushed before and I have probably shushed people myself. It is not the end of the world.

It does not mean there is a serious rift between the pair of them. Quite the opposite, probably.

As a player, I had loads of rows with my team-mates during games and you quickly forget about it. When you have calmed down you have a handshake and a hug and everything is fine.

I remember one with Steven Gerrard when I was at Liverpool in a game against Leeds. He was my room-mate at the time and we were best buddies, but I had messed up in midfield and lost the ball after dwelling on it, and he had a right good go at me.

It was along the lines of "sort yourself out and get yourself going quickly" but not in those exact words, and I responded, very defensively, along similar lines without registering that he was actually right.

Even though the way I acted was poor, the volley he gave me actually did get me going, and I realised that after the game.

I apologised for coming back at him the way I did, and told him he was right but he just said don't worry, it is done with now - and that was that.

That is the way it should be, and I would be shocked if Williams and Lukaku had not sorted things out in the dressing room after the match or, at the very latest, in training the next day.

It didn't really matter who was right, and who was wrong, but I actually saw Lukaku's reaction as a positive. He cares, and wants to do well for the team.

That sort of passion is part of the game and it would be more of a worry for Everton - or any prospective buyers - if he didn't show any.