Tottenham overcame the absence of leading scorer Harry Kane to secure a hard-fought win over Southampton that ensures they remain second in the table heading into the international break.

Goals from Christian Eriksen and Dele Alli - the latter a penalty - in an effective display underlined that Spurs are more than just their talismanic 24-goal striker.

The win extends Tottenham's club-record run of successive home Premier League wins to 10, the same number of points by which they trail leaders Chelsea.

Southampton lost in-form striker Manolo Gabbiadini to injury in the first half but gave a good account of themselves in the second, at the start of which James Ward-Prowse scored from close range.

But they were unable to gain parity as Tottenham's stubborn backline and industrious central midfield held them at bay.

Defeat leaves the Saints 10th in the table and needing an improbable 30 points from the 33 available to them to match last season's tally of 63.

With Chelsea in superb form, this season's title race is unlikely to go as deep into the season as the last campaign, but Tottenham will be hopeful of improving on their third-place finish by at least one spot.

No Kane, but Spurs remain able 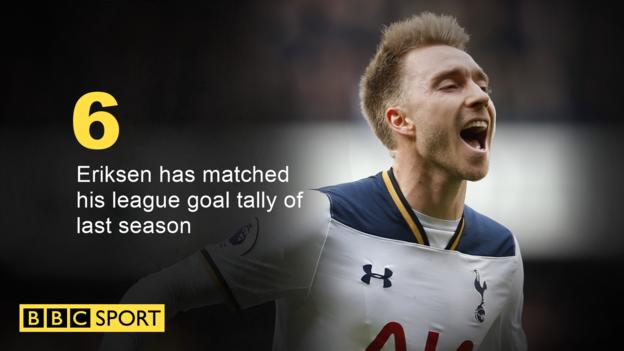 Prior to Sunday's match, Spurs had won just three of nine top-flight games without Kane this season, during which they had managed just eight goals.

However, one of those victories was the impressive 2-0 triumph over Manchester City in October, illustrating there are goals elsewhere in this talented side - a fact Eriksen and Alli demonstrated on Sunday with their 10th and 17th goals of the campaign respectively.

Eriksen's strike was powerful, low and accurate to find the bottom corner of Fraser Forster's net, while Alli's penalty was efficiently dispatched after he had been fouled in the box by Steven Davis.

Spurs boss Mauricio Pochettino had urged summer signing Vincent Janssen to step up in Kane's absence, but opted instead to start Son Heung-min, who scored a hat-trick in last weekend's 6-0 FA Cup win over League One Millwall.

The South Korean had two good chances to carry on Kane's good work but failed to convert either as Forster turned away his shot in just the third minute before his sluggishness in the box allowed a tackle to deny him once more.

He was replaced by Harry Winks as Spurs were forced into a more conservative approach in the second half, while Janssen was handed a late cameo that saw him draw a good save from Forster with a powerful drive.

Southampton have beaten Tottenham just once in their past nine league meetings and have enjoyed just three victories in 17 Premier League visits to White Hart Lane.

Trailing 2-0 at the break, having lost the exciting Gabbiadini during a largely passive first-half display, it looked like being a miserable afternoon all-round for Southampton.

However, they came out with renewed vigour and intent in the second half and immediately got themselves back into the game through Ward-Prowse's goal, set up by a low cross from Ryan Bertrand that evaded Jan Vertonghen.

Tottenham, though, have conceded just seven goals in 14 matches at White Hart Lane this season and their three-man defence of Vertonghen, Toby Alderweireld and Eric Dier, shielded by the hard-working Victor Wanyama and Dembele, wrestled back control of the game and saw it out.

Having lost 4-1 at home to Pochettino's Spurs in December and 3-0 at Ronald Koeman's Everton the following month, Southampton will be glad to see the back of sides managed by their former bosses for this season.

'We were better and deserved to win' - What the managers said

Tottenham manager Mauricio Pochettino: "To get three points you need to work hard. It was difficult. In the end we were better and deserved to win.

"First half we played very well. Second half we conceded a goal with our mistake and we allowed Southampton to score. It is another victory, we keep our position second and we have reason to be happy.

"The aim is the next game. We have 10 days without our players we hope nothing happens and all will arrive in good position."

Southampton manager Claude Puel: "It was strange. In the first half without pressure we took two goals and it is difficult to accept this.

"In the second half we came back with good attitude and scored quick. At 2-1 there was a possibility to come back. In the end a draw would have been normal. It is disappointment. It was difficult for us but also for Tottenham."

After the international break Tottenham have successive away games at Burnley on 1 April and Swansea four days later. Southampton are at home against Bournemouth on the Saturday and at St Mary's again on the Wednesday when Crystal Palace are the visitors.