Bottom club Sunderland drifted further from safety with a draw at home to Burnley, whose wait for a first away win of the Premier League season continues.

Burnley should have made their early superiority tell through Ashley Barnes, who prodded wide from six yards out just before the break, following Scott Arfield's defence-splitting flick.

After half-time, Sunderland improved hugely, and Tom Heaton made a fine stop at his far post to deny Adnan Januzaj's volley, before Billy Jones somehow headed a glorious chance wide from four yards out.

Jordan Pickford denied Sam Vokes with three minutes to play, while Heaton pulled off another save to turn Fabio Borini's shot wide as both sides continued to spurn good chances right up to the final whistle.

David Moyes' side are now without a win from their past six home matches, and Crystal Palace's 1-0 victory over Watford plunged them further into relegation trouble.

With 10 matches of the season remaining, the Black Cats are now seven points away from Swansea in 17th, with the Welsh club beaten 2-0 by Bournemouth in Saturday's 17:30 GMT kick-off.

The draw at the Stadium of Light was 13th-placed Burnley's third on the road this season, with Sean Dyche's side having taken three points from a possible 45 away from Turf Moor. 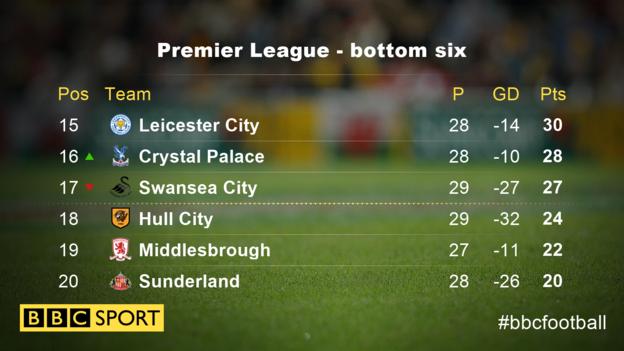 How did Jones miss?

Following his return to the England squad on Thursday, all eyes were on Jermain Defoe as the man most likely to spearhead what would have been a vital Sunderland win.

The striker has scored 14 of his side's 24 goals in the league this season, but he was a peripheral figure in a disjointed and nervy performance that only briefly improved in short periods after the break.

Januzaj should have scored but hit Defoe's clipped pass across goal straight at Burnley keeper Heaton, Seb Larsson skied over from close range as the ball was played back, but the best chance fell to full-back Jones.

Running to the far post at speed, he appeared to lose his balance when failing to steer in what looked like a simple chance on his head from Larsson's excellent cross.

The miss may prove to be costly indeed.

Where there was faint hope of survival following Sunderland's 4-0 thumping of Crystal Palace at Selhurst Park in early February, there must now be a growing realisation that relegation to England's second tier - from where they were promoted as 2006-07 champions - is the far more likely outcome.

Burnley manager Sean Dyche said his side were unfortunate to come away with nothing from an excellent display at Liverpool last Sunday, and he may well feel the same about drawing on Wearside.

Barnes' missed chance came at the end of a first half the Clarets totally dominated, and it was only during a 15-minute spell after the break that Sunderland fought back and conjured openings of their own.

Late substitute Vokes had two good chances in the game's closing stages, his second following a bad Jason Denayer error in defence that he should have profited from with a goal.

Sunderland centre-back Denayer dallied on the ball and allowed Vokes to steal in, but the striker's powerful low shot was denied by Pickford's strong right hand, with just three minutes to play.

The point moves Burnley level with Derby County's team of 2007-08 as the side with the joint worst away record in Premier League history.

But they still have four away matches - against Middlesbrough, Everton, Crystal Palace and Bournemouth - to move themselves clear of that very unwelcome record.

'We missed some big chances today'

Sunderland manager David Moyes, speaking to BBC Sport: "Our first half wasn't as good as the second. We missed some big chances today, which maybe we've not been getting in other games, but you've got to take them.

"Burnley make it difficult for a lot of teams, and they had one or two chances themselves, but we had to take one of ours. I thought we had the best of them.

"Billy had a header, Adnan had a chance at the back post, there were three or four. The players gave their all but we lacked a bit of quality at times - in all areas."

Burnley boss Sean Dyche, speaking to BBC Sport: "Only three points away, but we've been working hard. We had two golden chances in the first half and were in control of the game, then they came out and improved.

"They had to try and win and threw caution to the wind, we got a bit nervy and were not quite as good as we were at Anfield last week. But that's the madness of it. We lost against Liverpool and got a point today.

"Sometimes you need that rub of the green and I thought when Vokesy went through that one would seal it for us, but Pickford, an excellent young keeper, made a very fine save. It was a game of missed chances for both sides."

Sunderland next play away to Watford in the Premier League on 1 April, after the international break. Burnley host Tottenham in the league on the same day.