United manager Jose Mourinho was involved in touchline clashes with opposite number Antonio Conte and was verbally abused by Chelsea fans at the scene of many of his triumphs, including three titles.

The Portuguese was furious when midfielder Ander Herrera was sent off 10 minutes before half-time after a second foul on Eden Hazard, and the managers were kept apart moments later after Marcos Alonso tumbled to the floor after being brought down.

Kante's low 51st-minute drive finally beat defiant United keeper David de Gea, who saved superbly from Hazard and Gary Cahill before the break to keep Mourinho's side in contention before Chelsea made the breakthrough.

Marcus Rashford, who came off his sick bed to play - with Zlatan Ibrahimovic suspended, and Wayne Rooney and Anthony Martial injured, created United's best chance for himself but Chelsea keeper Thibaut Courtois saved with his feet to set up a semi-final against Tottenham at Wembley.

Mourinho's first return to Stamford Bridge after he was sacked as Chelsea manager ended in humiliation with a 4-0 defeat in October - and every piece of his body language here spoke of a man intent on putting matters right.

He was pacing his technical area from the first whistle, applauding, imploring and cajoling his team, stripped of talisman Ibrahimovic as well as Rooney and Martial.

With Mourinho in fired-up and combative mood, it was almost inevitable he would clash with his equally passionate and animated Stamford Bridge successor.

The flashpoint came seconds after Herrera's sending-off. Mourinho, still simmering, felt Alonso had dived, the Portuguese exploding in fury - soon to be joined by Conte in a head-to-head bout of bad blood that ended with the pair being separated and, in boxing parlance, being sent to their corners by fourth official Mike Jones.

It was a feud that bubbled throughout, with Conte reacting angrily in the second half when Mourinho kicked the ball along the touchline too close to the Chelsea manager for his liking.

The players seemed to take a cue from their managers through a series of tetchy clashes, one of which could lead to further action against United defender Marcos Rojo for an apparent stamp on Hazard.

Mourinho certainly did not feel the love on his return to the place where he enjoyed so much success, responding to four-letter abuse from Chelsea's fans behind his technical area by raising three fingers to signify the Premier League titles he won at Stamford Bridge.

The Portuguese was also taunted with chants of "Judas" - even though he was sacked by Chelsea a year last December.

He will feel a sense of injustice at Herrera's red card and frustration at Ibrahimovic's suspension - but the unpalatable truth for Mourinho is the team he left behind is currently far superior to the one he now guides. 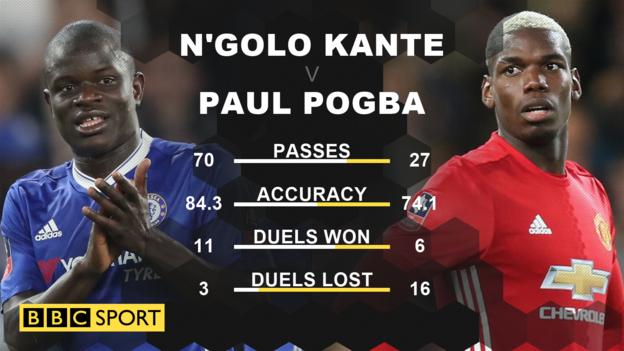 In the absence of Ibrahimovic, this was a night when United needed £89m world-record buy Paul Pogba to step forward and prove his worth. Instead he did a disappearing act.

The contrast between the influence of Pogba, on the periphery of the action and conceding possession with alarming regularity, and Chelsea's own summer purchase Kante was stark.

Kante was perpetual motion, starting attacks, breaking up moves and crowning another magnificent performance with the winning goal, emphatically drilled past De Gea.

Pogba simply could not get into the game, either before Chelsea took the lead or afterwards when Mourinho looked to his showpiece summer capture, the signing he set his heart on, to revive United's hopes.

Chelsea's fans revelled in Pogba's struggles as they chanted "what a waste of money" - no such charges will be levelled at Kante, who looks a £30m bargain.

Can anyone stop Chelsea?

Chelsea remained on course for that domestic Double, a feat they achieved under Conte's countryman Carlo Ancelotti in 2010.

And this was a victory for quality, persistence and character, albeit aided by Herrera's silly foul on Hazard that drew the second yellow card from referee Michael Oliver and left Chelsea with the numerical advantage.

Chelsea already look like Premier League champions-elect, standing 10 points clear, and their confidence gives them an air of invincibility.

Conte's side are at Wembley in the FA Cup semi-final - and it will take a special performance from any opponent to stop the bandwagon.

'We can compare the yellow cards with others not given'

Chelsea manager Antonio Conte: "It was a good performance against a strong team with good players. United has the best squad in the league. We must be pleased to go into the next round."

"Everybody can analyse from different perspectives but we all watch the match until the red card and after the red card. So we can compare the decisions of the two yellow cards, in this case with others which were not given.

"I don't want to go in that direction. Michael Oliver is a referee with fantastic potential but in four matches he has given three penalties and a red card. I cannot change that. I shook his hand and said many congratulations."

Leaders Chelsea travel to Stoke for a Premier League game on Saturday. United, meanwhile, host FC Rostov in the second leg of their Europa League tie on Thursday before visiting Middlesbrough in the Premier League on Sunday.