Arsenal boss Arsene Wenger says he will "stand up" for his decision to leave Alexis Sanchez out of the starting line-up in the 3-1 loss to Liverpool.

The Gunners manager brought on his top scorer at half-time, with his side 2-0 down, and he provided the pass for Danny Welbeck's goal.

"Everyone will come to the same conclusion," said Wenger.

"But I am strong enough and lucid enough to analyse the impact."

It was only the fifth time in his Arsenal career that Sanchez had started a Premier League game on the bench, with the Chile international so often a vital player for the Gunners.

He has been directly involved in a league-high 26 goals in his 26 league games this season, scoring 17 and assisting nine.

However, Wenger said he had decided to start Welbeck and Oliver Giroud instead to provide a more direct attacking threat.

"I wanted to play two players who were strong in the air and then bring Sanchez on in the second half," Wenger added.

"I don't deny Alexis Sanchez is a great player. A decision like that is not easy to make, you have to stand up for it."

The defeat was the Gunners' third in four league games and leaves them fifth, two points behind fourth-placed Manchester City, who have a game in hand. 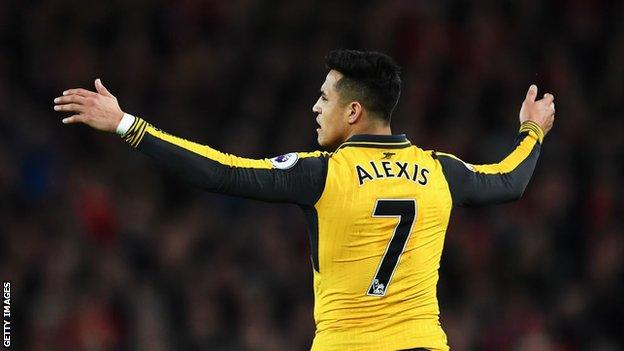 BBC Sport's chief football writer Phil McNulty: "Wenger's future may yet be defined - even decided - by his fatally flawed decision to drop leading scorer Alexis Sanchez for the meeting with Liverpool at Anfield.

"This was a match Wenger knew might go a long way towards shaping the Champions League places so surely it was an occasion to call on your biggest player, not adopt the sort of high-risk strategy that went horribly wrong in this damaging 3-1 defeat?

"Once Wenger left Sanchez out, defeat was not an option. He had to leave Anfield with a positive result, instead he was reduced to throwing the Chilean on in desperation at the start of the second half with Liverpool two up and in control.

"It was a baffling, inexplicable move that was was either going to prove gloriously courageous or calamitous. It proved to be the latter.

"Would Antonio Conte leave Diego Costa out of such a game? Would Spurs exclude Harry Kane? Would Jose Mourinho drop Zlatan Ibrahimovic? Not a chance.

"Wenger took the chance and he must now live with the consequences which may stretch beyond this one loss if Arsenal fail to qualify for the Champions League.

"Sanchez's own contract situation and uncertain future provides an intriguing backdrop. And what of Wenger's recent use of the player? Strange to say the least.

"He was brought on when Arsenal were leading 3-0 at Southampton in the FA Cup fourth round at St Mary's and brought on for the last 16 minutes when the Gunners were 2-0 up at non-league Sutton United in the fifth round.

"Was Sanchez really required on those occasions then left out of the starting line-up for this vital fixture?

"He was certainly needed at Anfield - and Wenger's decision not to use him may come back to haunt him and Arsenal."

"I really can't understand the thinking behind that. He's their best player. They didn't actually play direct in the match.

"I'm struggling to remember a more tepid performance in the last 20 years under Wenger. There was a lack of spirit and fire in their bellies."