The worst away record in the country, a goalkeeper made two penalty saves in League One and there were just three goalless games across the English Football League.

With the finish line in sight, those wanting promotion and those trying to escape relegation need to find points, not performances, now.

But away from that, BBC Sport looks at some of the stories you might have missed from Saturday.

Not down, nearly out?

You've got to be a committed fan to follow Rotherham on the road this season.

Sat bottom of the Championship, 16 points from safety and relegation looking all but inevitable, the Millers have picked up just one point away from New York Stadium.

They were on for a second point at Brentford until two injury-time goals meant a 17th loss from 18 games away from home.

"I'm not going to say we are down until we are down, but we are all realists," interim manager Paul Warne told BBC Radio Sheffield after the 4-2 defeat.

"I think we have a responsibility to our fans, our sponsors, our chairman and our families to perform every week.

"I think if you came here today and said my lads had given up, then you'd been drinking heavily before you came in."

Don't I recognise you?

When 22-year-old Birmingham City striker Alex Jones went on loan to Port Vale at the start of the season it was a productive spell, as he scored 10 goals in 21 outings.

That form persuaded Bradford City to put their hands in their pockets and buy Jones at the start of the January transfer window for an undisclosed fee.

In his first four games he failed to net for his new employers, but he came on in the second half to score the winner for the Bantams - against Vale.

By the looks of it, Jones was in no mood to temper his celebrations.

Speaking of familiar faces, back in the 2013-14 season forward Chris Dagnall and goalkeeper Jamie Jones were part of the Leyton Orient side that just missed out on promotion to the Championship in a play-off final.

Dagnall now plays for Crewe, and Jones for Stevenage, and the two teams met at Gresty Road. 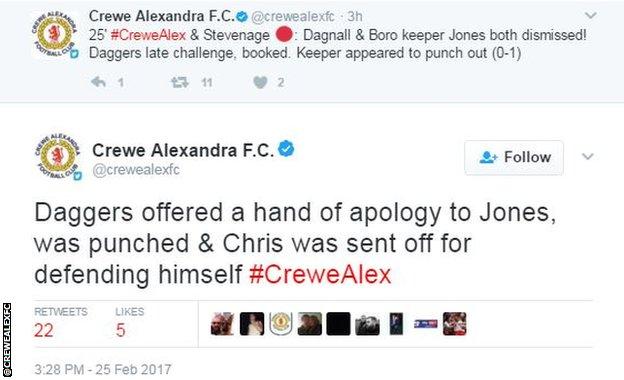 But it appeared that the former team-mates were not best pleased about seeing each other, after a challenge by Dagnall on Jones resulted in them both being dismissed for their reactions, in a game that Stevenage went on to win 2-1.

They went one better at London Road as there were three red cards, one for Peterborough and two for Rochdale, as the Posh won 3-1.

Being a goalkeeper can be a thankless task - spend a whole game making saves, and then one mistake and you are the villain.

That is why when it comes to saving penalties, you often see them celebrating like they have just drilled one into the top corner from outside the box.

Oldham keeper Connor Ripley went one better as he made not one, but two late penalty saves to secure a point for the relegation-threatened Latics against Millwall, and stretch their unbeaten run to four games.

"I was too angry to talk to anyone after they were awarded and I just looked over to [goalkeeping coach] Carlo Nash, as we do our research on the penalty takers," he told BBC Radio Manchester.

"So I kind of knew where he was going with the first one, but the second one was just down to me." 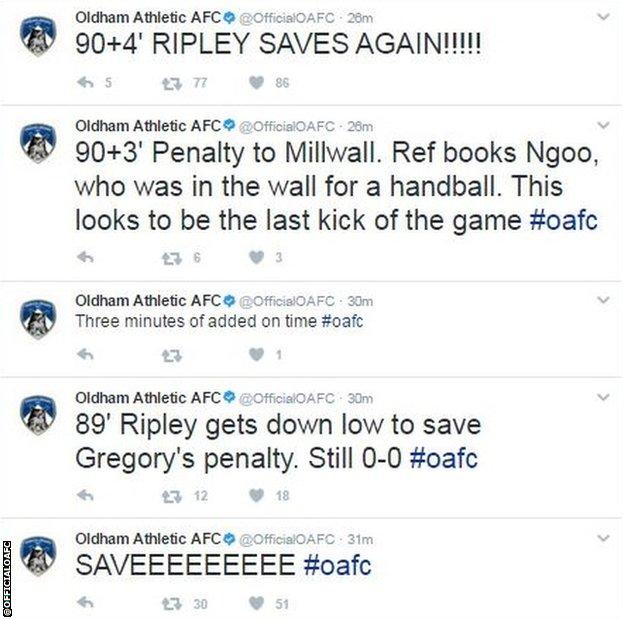 At the other end of the pitch there were men doing their job all over the country, by putting the ball in the back of the net.

In the Championship, Jota got his first English hat-trick in Brentford's 4-2 win over Rotherham, while Conor McAleny also got three as Oxford United won 4-0 at Chesterfield.

Billy Sharp's impressive season with League One leaders Sheffield United continued as he scored his 22nd and 23rd of the season, contributing an impressive 24 points with his goals in total.

Elsewhere, 38-year-old Bury player-coach Ryan Lowe scored his first goal since returning to the club from Crewe in their 1-0 win at Charlton, for a vital three points in their relegation scrap.