Real Madrid came from 2-0 down to record a remarkable win at Villarreal, a victory that saw them return to the top of La Liga.

The pivotal moment came at 2-1 when Villarreal's Bruno was adjudged to have handled in the area, although it was disputed if it was intentional.

Cristiano Ronaldo made it 2-2 from the spot after Gareth Bale had headed in Real's first.

Substitute Alvaro Morata then nodded in the winner seven minutes from time.

Real have 55 points, one clear of Barcelona who defeated Atletico Madrid 2-1 earlier on Sunday. Real also have a game in hand over their fierce rivals and over Sevilla, who sit in third with 52 points.

Relive the action as it happened 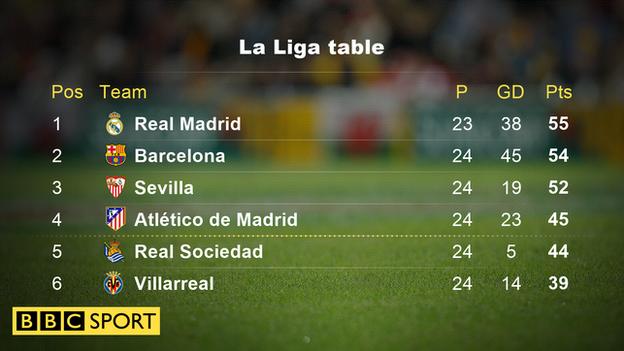 Coach Fran Escriba's Villarreal went into the match with the tag of 'the meanest defence in the league', having conceded only 15 goals this season.

They lived up to that in the opening half, by barely giving Real a sniff. The closest the visitors came to scoring was when Karim Benzema's header was spectacularly saved by Sergio Asenjo, from point-blank range,

The keeper was substituted having suffered a knee injury in keeping out the France striker's effort. It was later revealed the 27-year-old had suffered cruciate damage.

After the break, Villarreal took a deserved lead when Manu Trigueros fired a half volley past the reach of keeper Keylor Navas. Six minutes later, Real were rocked once more when Congolese forward Cedric Bakambu out-muscled Sergio Ramos to fire in low.

The visitors were staring at defeat.

Los Blancos pulled a goal back in the 64th minute when full-back Dani Carvajal picked out Bale with a great cross.

However, Villarreal still looked comfortable until the 73rd minute when their opponents were awarded a hotly disputed penalty.

Victor Ruiz blocked Toni Kroos' low shot but the ball spun up on to the arm of Bruno Soriano. Referee Gil Manzano thought it was intentional handball and pointed to the spot leading to furious exchanges between Villarreal staff on the touchline and the fourth official. Substitute Roberto Soldado was shown a yellow card for dissent.

Ronaldo fired in the penalty and Real sensed that they could snatch one of their most surprising wins of the season.

With seven minutes of the contest left, Real realised just that when substitute Morata headed in from Marcelo's pinpoint cross.

In the 88th minute, Bale was replaced by Lucas Vazquez moments after he appeared to land awkwardly on his ankle.

The Wales international, who has only just recently returned to action after two months out, did not appear to be in discomfort as he walked off the pitch.