Completing 'the 93' is something that often takes even the most die-hard of fans years to complete.

But one supporter has managed to visit every Football League stadium in England in just over six months.

You would have thought the previous Guinness World Record - which includes all 92 English Football League grounds plus Berwick Rangers [who were on the itinerary when the original world record was set in 1969] - of 237 days would be hard to beat.

But Ed shaved 48 days off the last mark. So was it simply luck, or skill?

"It takes a lot of planning," said the 51-year-old, who lives in Leeds. "I did a practice run in 2015-16. I looked at the fixtures, and tried to understand how and why they move.

"Very few League One and League Two matches get moved, so you know these will take place on a Saturday and Tuesday.

"The rest fit around this, with television changes and fixture rearrangements. The games on TV, I usually know I'm going to.

"There's been some luck. Newport v Barnet was played on a Tuesday night following a previous postponement with no other games on that night, and my final match [Rochdale v Charlton] was rescheduled thanks to the FA Cup."

'I wanted to break the cycle'

Wood has held the record before in the 1991-92 season, but said he was inspired to try to reclaim it.

"The biggest reason to do this again was my dad dying in 2014," he said. "I didn't just want to work, retire and die. I was working hard and just wanted to break the cycle. Wake up, work hard, and bed - that was my routine. 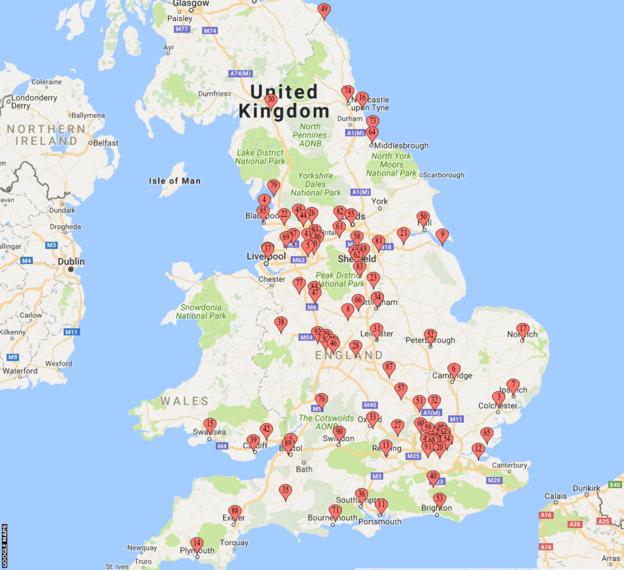 "I felt I could get more out of it this time. It would be a new experience and would re-energise me.

"I was given challenges by some friends, including: going to a match with someone who has the same name, having a selfie with a chairman, and getting into the changing rooms - I didn't get them all done but it made it fun."

As you would expect, there have been many memories created on the tour, but from grounds to fans, which ones stood out for Ed?

"I was given a season ticket by a man called Colin Thurlbourn, who I have never met even to this day. Colin Thurlbourn found me on Twitter, his dad had prostate cancer [the charity Wood has collected at least £5,500 for on his tour] and arranged for it all to be sorted."

Another highlight for Ed was watching Berwick Rangers draw 1-1 with Cowdenbeath in November.

"Two Berwick players were sent off, one missed penalty, a 21-man brawl and only 454 spectators there to see it, 50 of whom were attending a hen party - they weren't too concerned with the football," he joked.

"As a Derby fan, I am inclined to say visiting Pride Park on the night of our 3-0 win over Nottingham Forest was one of the best nights," he said.

"I love a quirky ground and Newport's Rodney Parade is definitely that. They let me sell programmes and put on the mascot's outfit - something I instantly regretted."

"I'll give that one to Sheffield Wednesday. Spurs was good but I wasn't expecting the same at Hillsborough. It felt like there was singing from all sides."

"Easy. Newcastle (at the DW Stadium). They sang all the way through the game. It was arranged for me to do a collection in the home and away bars at Wigan, and once the Newcastle fans heard my speech they kept chanting my name."

On four occasions, Wood watched two games on the same day, but nearly came unstuck when a lunchtime kick-off at Mansfield gave him little time to travel the 17 miles to Notts County.

"A man called Dean Riley helped me massively. Mansfield's match finished at 14:05 and he was waiting outside on a motorbike. Thankfully he'd done two dummy runs because he really wanted to help me out.

"There were speed cameras, traffic congestion and traffic lights everywhere. The rule is you have to watch 90 minutes of football at each ground, you can't turn up late. I got there with 10 minutes to spare."

They think it's all over...

Well, it is now. And Ed is thankful for the memories it has created.

"People have made a fuss of me as this has gone on. It's gone from swearing on the pitch in front of the fans at Oldham as a sprinkler soaked me, to meeting two people who held the record in 1968-69. It's been a great achievement," he added.

Doug Male from the Guinness World Records said it was an "incredible achievement by Ed".

"The logistical challenge of assessing the fixture list and calculating appropriate routes that encompass all 93 stadiums should not to be underestimated," he added. "Taking time out from his normal life to pursue his goal shows astounding commitment to making history."

"We always like to hope that our records are breakable," said Male. "Ed faced some trouble along the way with postponements and rescheduling. If someone with a similar analytical mind comes along, they could find a fresh approach that could gift them the record.

"On top of that, if a few cup draws go your way, you could shave a few days off here and there."