Leicester's defeat at Southampton was a great example of how tactics, rather than players, are hugely important in deciding football matches.

You still need a talented, intelligent team with the ability to carry those tactics out for you, of course, but your system can win or lose a game for you - just the same as an amazing bit of skill will.

That is what happened as St Mary's when Leicester lined up in a diamond shape in midfield. They played it really poorly, because it looked to me as if they had not worked on it very much. 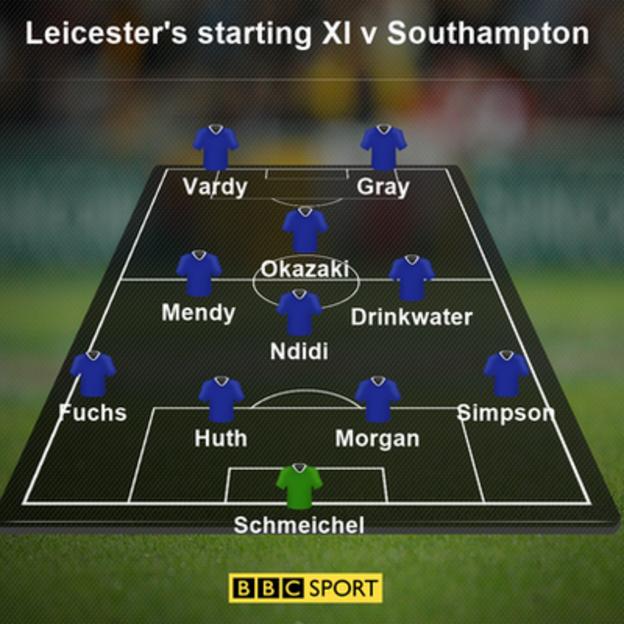 Southampton quickly worked out how to capitalise on their weaknesses and, by the time Leicester changed their shape at half-time, they were 2-0 down and as good as out of the game.

That tactical effect is not always so obvious when I watch Premier League matches.

A lot of the time both teams are playing a similar way, or both are well organised and working hard - and it is a moment of quality that wins the game.

On Sunday, Saints were much better tactically and they won the match because of it.

'A difficult system to master, without the ball'

I never played regularly in a diamond at any of my clubs, but we used it at certain times when I was at Liverpool and it worked quite nicely for us.

In particular, we did it a few times when we played Manchester United at home because we felt their strength was in central areas, trying to play through us.

Using the diamond forced them wide and they put crosses in, which was what we wanted them to do.

It also meant we could press them higher up the pitch because the two strikers would be backed up by the man at the point of the diamond.

It tends to suit teams who have the majority of possession and play a lot of football because you have got four men in the centre of midfield and, although you are lacking in the wide areas, you should have at least one extra man in the middle. That is the theory anyway.

What actually happened with Leicester was they did not try to play out from the back and keep hold of the ball to use that extra man.

And, when they lost the ball, the guys who were in the diamond were crossing positions too much because they were not sure when to look for the ball in middle or when to go and try to win it out wide.

It is a difficult system to master, especially when you have not got possession.

I am not against it, because I have played in it when it has worked, but it does not stretch the pitch as much as other formations and you do feel like you are doing extra work.

I played as the wide man in a diamond a few times in my career and it is one of the hardest jobs a player can be asked to do.

It involves a heck of a lot of running, because you are kind of playing in centre midfield, then you are playing right midfield - then right-back and on the right wing.

You have to know when to go and chase the ball and when to sit and, on Sunday, Leicester's Danny Drinkwater, for example, struggled to get that right.

We know Danny is a very good central midfielder - he was one of the best in the Premier League last season.

However, he was on the right of the diamond against Saints and was not used to that position, which let Saints left-back Ryan Bertrand really enjoy himself in the first half.

Sometimes Drinkwater was reacting to Saints attacks down his wing too late because he was too narrow and he could not get out to Bertrand in time, or he went out wide too early and left a gap inside.

He was not the only Leicester player to be caught between two places where they were meant to be and Saints utilised all this space really well because they kept switching play.

That left the two Leicester full-backs isolated a lot of the time and Southampton were getting a lot of crosses into their box - they scored their first goal from one of them.

I saw a lot of the Leicester players question each other during that first half and get angry about who was marking who and where they were supposed to be.

So Ranieri was right to come out afterwards and acknowledge the way they started the game was his fault because he had tried something new.

The players will always take some of the responsibility because they are out on the pitch, but asking them to work on a system for a few days then go away to a good side like Southampton is a bit too much to ask.

Compare that performance to the way Leicester were playing last season when all their players looked so comfortable playing 4-4-1-1 because they all knew their jobs. They had little partnerships all over the pitch, and it was perfect in so many ways.

Things are different now. They have brought in some new players and are trying to adapt a little bit and they also have to deal with teams raising their game against them because they are the champions.

The expectancy level has gone up and, maybe because they have had a bad run, they have changed things too much instead of sticking to what they know.

That is not a criticism of Leicester, because every club wants to evolve and improve their squad with better players . When you do that, you want to keep the ball a bit more and play in different ways.

But it did not work out for them last week when they switched to play with three at the back in their defeat by Chelsea either.

The sooner they get back to a settled formation, the sooner their results will pick up. I don't think we will see that diamond again any time soon, though.

What next for the Foxes?

Sometimes it is not the fact you lose a game that hurts you, it is the way you lose it.

Leicester's players will watch a recording of that Southampton game at some point this week and there are not many positives for them to take from it, even in the second half.

The league table does not look too good for the Foxes either - and their away form has been terrible all season.

They need to pick themselves up quickly, but I still look at the attacking quality they have in their squad compared to the other teams down at the bottom and think they can go on a run and climb the table.

Will they go down? You can never say never, but I would be shocked if they got sucked into the bottom three.