West Ham have accused Dimitri Payet of showing a lack of "commitment and respect" after the France international rejoined Marseille for £25m.

The Hammers insist they did not need to sell Payet and joint-chairman David Sullivan said he wanted the player to stay to "make an example" of him.

But Sullivan added that manager Slaven Bilic approved the sale in "the interests of squad unity".

Payet said he needed to "return to his roots" at his former club.

The 29-year-old has signed a four-and-a-half-year deal with the Ligue 1 club.

He said: "I lived an exceptional year at West Ham, I have a great memory of the fans of the club.

"Going back to Marseille is a personal choice. I no longer felt well at West Ham, I needed to return to my roots.

"Marseille is a very pleasant city to live in." 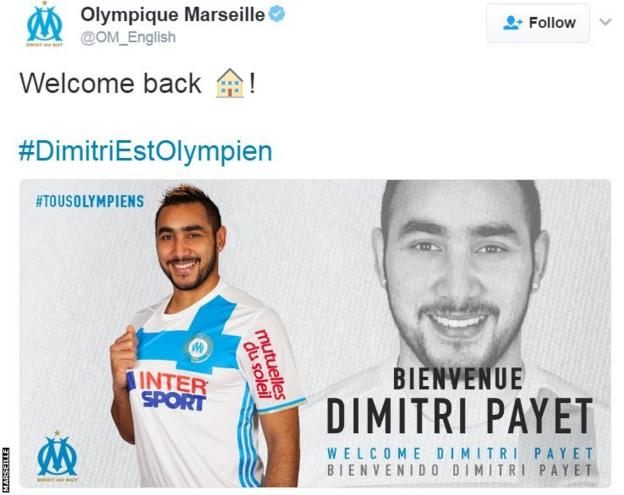 The club would like to place on record its sincere disappointment that Dimitri Payet did not show the same commitment and respect to West Ham United that the club and fans showed him, particularly when it rewarded him with a lucrative new five-and-a-half-year deal only last year.

I would like to make it clear that we have no financial need to sell our best players and that the decision to allow Payet to leave was in accordance with the wishes of the manager and the interests of squad unity. To be frank, my board and I would have preferred for him to have stayed in order to make an example of him, as no player is bigger than the club.

I am confident that with the quality of the players we have brought in during January already, the squad will be stronger at the end of this transfer window than it was at the start.

The attacking midfielder joined West Ham from Marseille for £10.7m in June 2015 and signed a new five-and-a-half-year contract in February 2016.

He excelled in his first season with the London club, scoring 12 goals and earning a nomination for the PFA Players' Player of the Year award.

During the 2015-16 season West Ham won 50% of the Premier League games that Payet played in, but just one of the eight matches he missed.

He then helped France reach the final of Euro 2016, where the hosts were beaten by Portugal.

This season Payet's influence on the Hammers has waned, with the team winning three of the four games he has missed but only 27.8% of those he has featured in.

However, statistics suggest that his individual displays have not changed drastically.

Over 90 minutes he averaged 3.27 shots this season compared to 2.42 last term, created 4.4 chances per game compared to 4.17 last season and had more touches and a better passing accuracy this season.

Bilic said earlier this month that Payet, who has scored three goals this season, did not want to play for the club any more.

West Ham insisted he would not be sold, but after rejecting two bids from Marseille and signing Robert Snodgrass, they decided to sell the France international on Sunday.

As well as the purchase of Snodgrass this month, the Hammers have also signed centre-back Jose Fonte from Southampton for £8m.