The past 12 months have thrown up some classic matches, memorable incidents and remarkable feats.

BBC Sport selected 10 standout Premier League moments from this year and we asked our readers to rank their top 10.

For some - Leicester's title triumph and Jurgen Klopp's impact at Liverpool, for example - there were multiple moments we could have chosen, so we went for the one match that particularly defined that team's year.

The order of the top 10 was discussed on The Premier League Show on Wednesday, which you can watch again on BBC iPlayer.

Here's how the moments were ranked by you: 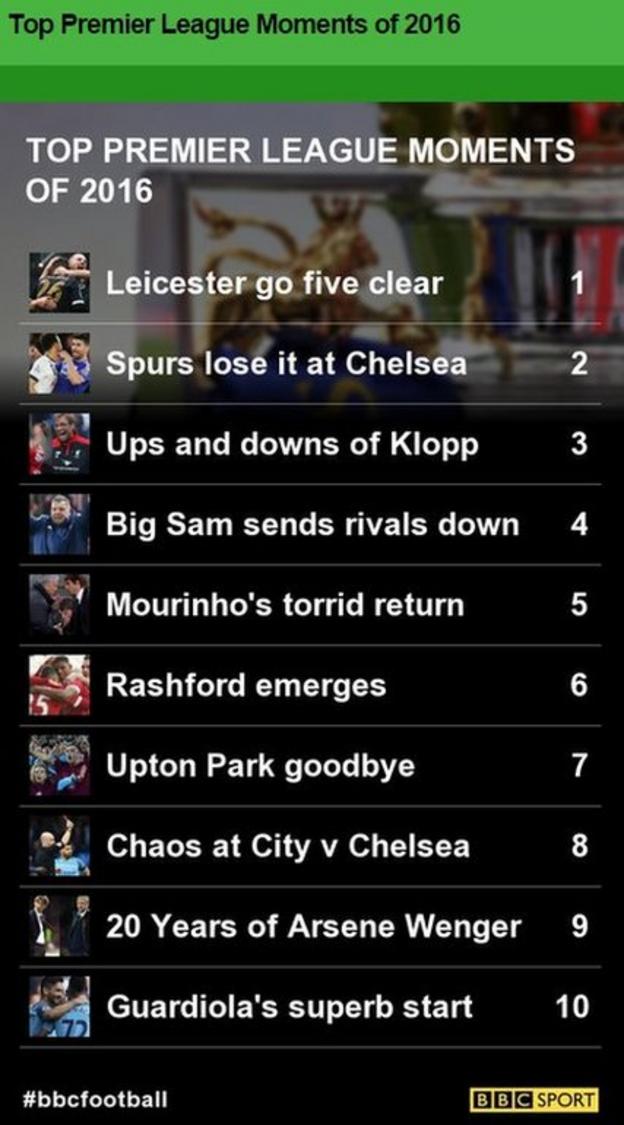 Leicester's Premier League title win will go down as one of the most memorable moments in football history, so it's no surprise 41% of BBC Sport users picked the Foxes as their top choice.

Many had been waiting for the Foxes' incredible run to falter, but doubters were turned into believers when Claudio Ranieri's side stunned nearest rivals Manchester City with a convincing 3-1 victory on 6 February to move five points clear.

And then, three months later, captain Wes Morgan and co were dancing around Jamie Vardy's kitchen as they watched Tottenham squander a two-goal lead to draw with Chelsea - a result which handed Leicester the title. Over 7,000 readers selected this as their second-favourite moment.

3) Ups and downs of Klopp

At number three is Liverpool's 5-4 win over Norwich from January, which is a prime example of what to expect from Jurgen Klopp's Liverpool: exhilarating attacking play, wide-open defending, wild celebrations and missing glasses.

Norwich were 3-1 ahead in the second half, before having to recover to 4-4 in injury time, but Adam Lallana's late, late goal won it.

The England midfielder ripped off his shirt and everyone piled on manager Klopp, who lost his trademark glasses in the celebration melee.

Sunderland had been revived under Sam Allardyce and their 3-0 win over Everton in the penultimate game of the season meant his former side Newcastle and Norwich were cut four points adrift.

The Championship beckoned for Rafa Benitez's Magpies, while Allardyce went on to become England manager... for 58 days.

Jose Mourinho called himself 'The Special One' at Chelsea after winning seven trophies during his two spells in charge.

He received a warm welcome on his return to Stamford Bridge with Manchester United in October, but he left humiliated.

Pedro put the Blues 1-0 up after only 30 seconds and the horror show ended up finishing 4-0.

Teenager Marcus Rashford brought back heady memories of the Busby Babes and Fergie's Fledglings when he burst on to the scene in February.

The Manchester United forward - locally born and bred in Wythenshawe - scored twice on his debut against FC Midtjylland and, three days later, added two more as his side beat Arsenal 3-2.

Cue billions of internet searches for 'who is Marcus Rashford?'. The answer now? A first-team regular for United and England international.

On 10 May, West Ham finally bowed out of Upton Park after 112 years to move to the Olympic Stadium.

And their final game against Manchester United was described as a "blockbuster movie". And with good reason.

The visitors led 2-1 with 18 minutes left after Anthony Martial's double, but goals from Michail Antonio and Winston Reid gave the hosts victory.

And then came an extravagant closing ceremony, featuring fireworks, a light show, former players escorted around the pitch in London taxi cabs and Paolo di Canio in a purple suit.

Drama descended on tEtihad Stadium earlier this month. But while both sides clashed late on in ugly scenes, it was the significance of Chelsea's 3-1 win under new manager Antonio Conte that stood out.

This time last year the defending champions were in disarray and disharmony. Now, 12 months on the Italian has the Blues six points clear at the Premier League summit.

Twenty years ago in September, a Frenchman was plucked from Japanese side Grampus Eight and arrived in England as only the third foreign manager to take charge of a Premier League club.

Now, after two decades at Arsenal, 15 trophies, a new stadium and almost £700m spent on players, Arsene Wenger is the longest-serving - and most successful - overseas manager this country has known.

Wenger celebrated his anniversary at Turf Moor, where his side inflicted a cruel 1-0 defeat on Burnley, with the only goal of the game coming from Laurent Koscielny's slightly offside elbow.

With three La Liga and three Bundesliga titles under his belt, Pep Guardiola swaggered into the Premier League at Manchester City this summer and looked totally at home.

They really turned on the charm in their eighth win in eight matches, when they trounced Bournemouth 4-0.

City's winning run finally came to an end in September, in Guardiola's 11th match in charge, when they drew with Celtic in the Champions League. And it's not quite been the same since.

In Wednesday's Sportsday Live, we asked BBC Sport Online users to come up with their own personal 2016 sporting highlights.

Here's the best of them.