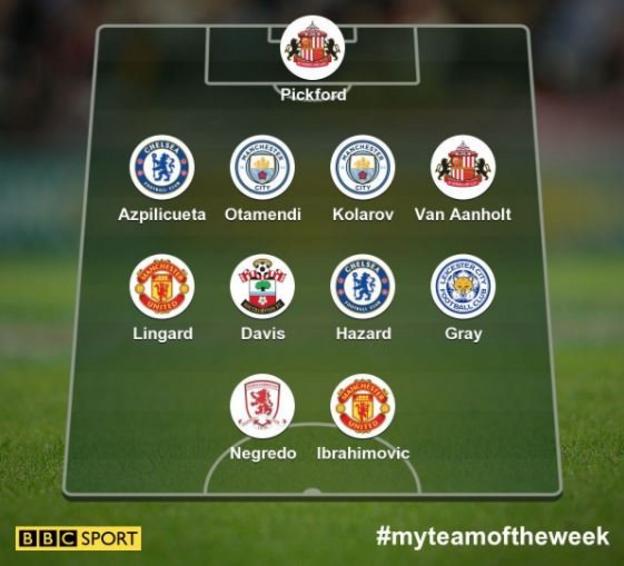 Chelsea won their 11th straight game in the Premier League, while Manchester City moved up to second by beating title rivals Arsenal.

There were also wins for Tottenham, Manchester United, Southampton, West Ham, Sunderland and Middlesbrough, while champions Leicester fought back to draw at Stoke.

This young man is quickly making a name for himself. Jordan Pickford's start as a Premier League player was a little shaky but he has grown in confidence with every game.

What impresses me is his cool head. He is playing under immense pressure at the Stadium of Light as the club fights for survival, but nevertheless is holding his nerve brilliantly. The save from Watford midfielder Nordin Amrabat wasn't bad but the punch in the heat of the battle followed by the saves from Daryl Janmaat and then Odion Ighalo were simply brilliant.

This is an English goalkeeper with a very bright future.

Four of Chelsea's past six wins have been by 1-0 scorelines. What does that tell us? Well, it tells me that Chelsea's back five are in imperious form. However, I have singled out Cesar Azpilicueta for special praise this week.

His overall contribution to the team has steadily grown with every game. It was the Spaniard's wonderfully timed cross that split Palace's defence, marooned goalkeeper Wayne Hennessey and invited Diego Costa to attack the gift. While in defence, alongside Gary Cahill and David Luiz, he looks commanding.

He is one of a number of potential leaders being groomed by manager Antonio Conte at the moment, which signals that John Terry's work at Stamford Bridge is now done.

Call me old fashioned, but I simply can't come to terms with central defenders who wear gloves. As a consequence, I have always tended to distrust Otamendi.

It is a totally irrational position to hold as his mittens can't possibly determine how well he defends a corner. In any case I may have to revise my stance based on how well he defended against Arsenal in the second half.

As for the Gunners, they have just lost two major games that may cost them the title and yet what is the issue dominating the dressing room? Are Alexis Sanchez and Mesut Ozil going to stay at the club and are Arsenal prepared to pay them £300,000 a week for the privilege? How can this issue be dominating the conversation when they are chasing the title? Spurs fans must be loving this.

I simply didn't trust this Manchester City backline not to concede a second goal to Arsenal, especially after their first-half mauling, but they managed it.

Aleksandar Kolarov is not a natural centre-back but he certainly played like it in the second half. Both Otamendi and Kolarov suddenly became proper defenders and started to compete.

They also looked much more comfortable with dedicated full-backs who were happy to sit in and not run all over the place - a feature Pep Guardiola might want to consider in future matches.

I could have gone for Danny Rose, Ryan Bertrand or Marcos Alonso, all of whom were outstanding this weekend. But I have gone for Patrick van Aanholt, who really doesn't want to be stuck at the bottom of the table at Christmas. The stats say that if you are, you will almost certainly be going down.

The run by Van Aanholt from deep in his own half into Watford's penalty area for the only goal of the match epitomised the desire, and it will be required to get Sunderland out of the bottom three.

Since striker Victor Anichebe's introduction into the team alongside the always dangerous Jermain Defoe, boss David Moyes has a chance of getting more favourable results at the Stadium of Light.

However, I do wish the Sunderland manager wasn't so publicly negative about his team's capabilities. His team might be in the bottom three but it doesn't mean that they are not capable of special moments.

What Van Aanholt produced was one of those special moments and I am sure there is more where that came from - if only the manager exuded a little more belief.

I think we have all been waiting for Jesse Lingard to continue his progression for some time. We have seen flashes of his talents but nothing over a sustained period. And yet in the game against West Brom, Lingard played like a grown-up looking to actively hurt the opposition at every opportunity as opposed to appearing to simply enjoy the game.

Lingard clearly has enormous ability but I am not yet totally convinced about his desire. He is playing with some amazing players. He must make it tell while he has the chance. I have seen lots of young promising players disappear from Old Trafford without a trace.

If ever there was a game of the proverbial two halves then this was it. Bournemouth more than held their own in the first half, but desperately ran out of steam in the second 45 minutes. I was at the Vitality Stadium for their impressive victory against Leicester in midweek and that performance clearly took more out of the Cherries than they realised.

Nevertheless, I didn't expect Steven Davis' second-half introduction to have such a dramatic effect. The Northern Irishman took the game by the scruff of the neck and helped lead his side to a win sealed by two Jay Rodriguez goals. Up until then, the game wasn't really going anywhere and a draw would have suited Bournemouth.

The Saints, however, had different ideas and all credit to boss Claude Puel, who identified that their hosts were rapidly becoming a spent force and made the change that mattered. Now that's good management.

Alan Pardew is struggling. If results don't improve for the Crystal Palace manager over the Christmas period he could find himself out of a job in the New Year, which would be a shame in my view. Pardew is a good manager but results are everything.

Eden Hazard, meanwhile, is looking lean and mean at the moment, a player at the top of his game. He is showing the kind of awareness that won him the PFA Player of the Year in 2014-15. He goes past players for fun and can deliver the killer pass. So why did Palace give him so much time and space to wreak such havoc in their ranks? Fear, I suspect.

It is not often I select a 72nd-minute substitute in my team of the week, but this change was so significant in a game that needed some serious reparation. Make no mistake, referee Craig Pawson got himself into a terrible muddle over the sending-off of Leicester striker Jamie Vardy.

I have no doubt that his decision was coloured by Manchester United defender Marcos Rojo's tackle on Wilfried Zaha in midweek, when he didn't send the Argentine off for a two-footed tackle. I don't know how Stoke manager Mark Hughes managed to say Vardy deserved to be sent off in his post-match interview and keep a straight face.

The Vardy tackle bore no resemblance to the Rojo incident and Pawson got both woefully wrong. Enter Demarai Gray, whose contribution redressed the injustice and changed the fortunes of a Leicester side who deserved something out of this game. As for Stoke? Well, they blew it.

Alvaro Negredo was unlucky not to be in my team of the week after his performance away at Leicester, but I had no hesitation in selecting the Spaniard after his two excellent efforts against Swansea. I loved the way he dumped Swans goalkeeper Lukasz Fabianski on his backside with his penalty. A measure of the confidence the forward possesses at the moment.

Four goals in his past four games is one thing, but when players start performing rabonas that tells you all you need to know. I saw him play for Manchester City and he certainly wasn't doing rabonas there.

I questioned manager Bob Bradley's qualifications for the job at Swansea in the first place. That said, he always gives an honest and fair appraisal of his team's performance, but even so he must feel they are struggling to stay in the division.

Lose their next two fixtures at home and there may be no way back for them.

So, according to Manchester United manager Jose Mourinho, Ibrahimovic is undroppable? Well I have heard that before and the remark may come back to haunt him. In the meantime, Ibrahimovic does look in sparkling form. He is on 16 goals in all competitions already this season.

From the moment the most sensational cross left Lingard's boot, Ibrahimovic was licking his lips in anticipation and was in no doubt where the ball was going to end up.

Manchester United are beginning to find a rhythm and putting a run together, but should anything happen to Ibrahimovic they will soon be back in the mire.