Danny Murphy will join Gary Lineker and Jermaine Jenas on Match of the Day on BBC One and the BBC Sport website at 22:25 GMT on Saturday.

Manchester City manager Pep Guardiola is getting a lot of criticism for the changes he keeps making to his team and formation, especially with them defending as badly as they did against Leicester last weekend.

It is true that City are going through a bad time. Even Wednesday's win over Watford was not a convincing one - but there is definitely no need to panic.

What Guardiola has done so far tells us that, after 26 games in charge of City in all competitions, he does not know his best XI or the way he wants to play.

For some people that seems to be shocking but, for me, it is not a massive surprise.

It is actually completely normal for any manager who comes into a club to try to assess what he has already got, decide what he needs, bring in the players he wants and work with them to get them on his wavelength.

You cannot do that overnight, no matter how good you are. Look at Jurgen Klopp at Liverpool - he was appointed Reds manager in October 2015 and it is only really since the beginning of this season that they have consistently looked like his team.

So far we have only seen glimpses of what Guardiola's City side could be like, but that is fair enough - after all, he has only been in charge since the summer.

Despite that, it seems that when you mix the tweaks he is making to his team with a couple of poor performances and some injuries and suspensions, then suddenly people are trying to put the Spaniard under pressure.

A chance to say 'we mean business' 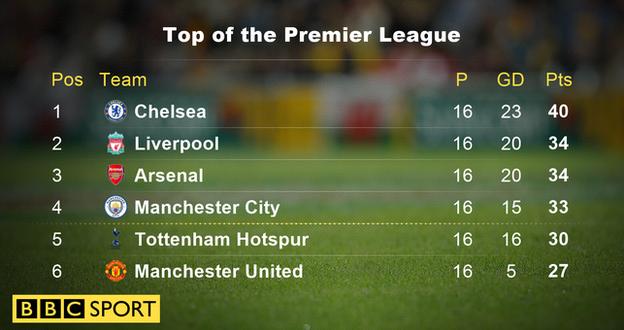 Sunday's game against Arsenal is a wonderful opportunity for Guardiola to put things right.

City may be going through a transitional period but they are still capable of blowing teams away.

Their performance in their 3-1 home defeat by Chelsea at the start of December was actually pretty good - they made enough chances to beat the side that is flying high at the top of the table at the moment.

A win at the weekend would be a statement to the other teams at the top that City still mean business, but Arsenal are likely to look at the game in the same way.

The Gunners will be determined to show that their defeat at Everton on Tuesday has not knocked them off their stride, and that they are still a good side.

I will be interested to see how Arsene Wenger's side line up and whether they will sit off like they did when they went to Old Trafford last month and let Manchester United dictate play.

I think Arsenal might have learned from that game because they got dominated and should have lost. They were rescued by Olivier Giroud's 89th-minute equaliser.

Even if they are not on the front foot at Etihad Stadium, the Gunners might actually be quietly confident.

City have got some key players missing - Sergio Aguero and Fernandinho are suspended, and Ilkay Gundogan is facing a long injury lay-off - on top of their defensive problems.

I am all for players being adaptable and teams being able to change formation, but doing it constantly makes it really difficult to gain any consistency in your performances.

Consistency is City's biggest issue at the moment, particularly in defence where they have found it hard to keep any clean sheets.

That is why I think they should stick to one formation from now on. The personnel might still have to change but at least they would all be working on the same system at the back.

Which one? Well, I thought City looked settled earlier in the season when Guardiola went with a version of the 4-3-3 he used at Barcelona and Bayern Munich.

The last game City started in that shape was their derby win against United in September, but their players appeared comfortable with it.

Rather than making them overthink by chopping and changing the team shape, Guardiola should just let their quality come through.

Stability in a system can be a good thing. I am a bit old school but the success I had as a player at Liverpool and Fulham, for example, was based on every member of the team knowing their jobs and having a good relationship with the players around them.

'Guardiola task is his hardest job to date'

Some people seem to want Guardiola to fail in England, but I am not one of them.

I love the way his teams play and it is great to have him and the other 'super coaches' - like Jose Mourinho, Jurgen Klopp, Antonio Conte, Mauricio Pochettino and Wenger - working in this country with their different philosophies and methods.

I don't doubt Guardiola's ability, either, but his task at City is definitely his hardest job to date.

City were not and never have been as dominant as Barcelona or Bayern Munich, either in Europe or domestically. Guardiola knew that when he took the job, and I think he was always aware that he needed some time to build.

The difference with him doing that here compared with in Spain or Germany is that there are some matches where, even if Barca or Bayern do not play well, they know they will not lose them.

In the Premier League, there is a danger of City losing every game they play - and of him getting stick when it happens.

It is the same for every one of the 'super coaches' in the Premier League, though. It goes with the territory.

Chelsea boss Conte was under pressure in September, when Guardiola was still winning every game. It was the same with Mourinho at Manchester United before their results picked up.

What Guardiola is going through now is part of working in the English top flight. You are going to have spells where things do not go your way, and you have to ride them out. All the good teams do it.

'Title race is so hard to call'

Right now it is City's turn to have a sticky patch, but you know they will have a great spell at some point because of the quality they have got in their squad.

From a neutral's point of view, the competition between the top six is immense and trying to call the title race at the moment is extremely difficult. I would not put any of them together in a game and be confident of picking a winner.

Chelsea and Liverpool do not have European commitments - which I see as a really big advantage when you are trying to work on tactics and fitness - but right now all six teams look like they will remain competitive at the top of the table.

By the end of the season, the difference points-wise between first and sixth could be as small as it has ever been.

Every game they play against each other has such intensity and, like Sunday's, is something we all look forward to.