Danny Rose scored the winner as Tottenham came from behind to beat Burnley in controversial circumstances in the Premier League.

Substitute Moussa Sissoko was given only a yellow card for a high, late tackle on Stephen Ward, before putting Rose through on goal in the next move, as the full-back smashed home at the near post.

"It was a blind challenge, a high challenge and simply a red card," said Burnley boss Sean Dyche.

Spurs were punished for a sloppy start as they failed to clear the ball, allowing Ashley Barnes to poke in the opener.

Prior to the goal, Dele Alli had struck the post from close range, before the midfielder restored parity by converting Kyle Walker's low cross.

Burnley will rightly feel aggrieved as they were hanging on for an away point, with Spurs struggling to break their defence down in the second half until Sissoko's intervention.

Dyche added: "I don't want go on about the referee but Sissoko has to go off and he sets up the second goal - obviously I am very disappointed about that."

As referee Kevin Friend saw the incident and took action, no retrospective disciplinary case can be brought against the Frenchman by the Football Association.

Despite falling behind, Mauricio Pochettino's side dominated a match in which they had 30 shots at goal, forcing Burnley goalkeeper Tom Heaton into seven saves.

The England international stopped well from Harry Kane and Victor Wanyama, and dived full stretch to his left to keep out Christian Eriksen's drive.

Tottenham continued to pressurise their opponents down the flanks, and it was the home side's two full-backs who proved to be the difference.

Walker got forward to provide the assist for Alli's equaliser, while Rose - who put in more crosses than any other player on the pitch - found himself in the opposition area for the second goal.

Rose told BBC Sport: "The gaffer does not like us both being high up the pitch at the same time but we changed that today. The manager got his tactics spot on."

Victory leaves Spurs in fifth place in the table, but only one point behind rivals Arsenal, who lost 2-1 at Manchester City.

The Clarets got off to a good start and scored their first away goal of the season from open play courtesy of Barnes' opportunistic strike after haphazard Tottenham defending.

But the loss means they have picked up just one point from eight games on their travels this term.

More worryingly for Dyche's side will be their inability to create chances, with striker Andre Gray's effort straight at Hugo Lloris their only other shot on target.

The Lancashire side are just three points above the relegation zone and have important home games coming up against Middlesbrough and Sunderland. 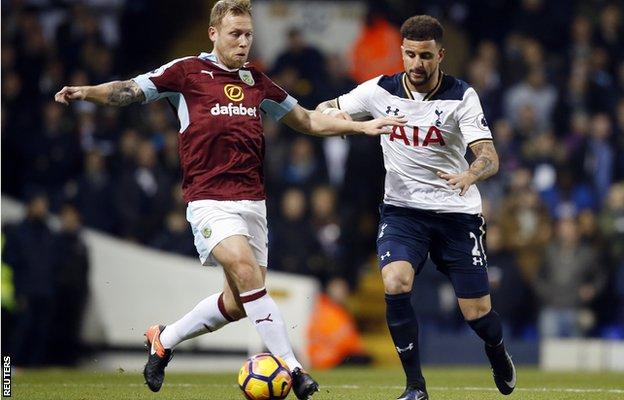 England full-back Walker's tireless running saw him make 76 sprints at a top speed of 33.33 km/h - better than any other team-mate. His 87 touches on the ball and five key passes was more than any other player on the pitch, while also contributing three tackles.

Tottenham manager Mauricio Pochettino: "In the Premier League it is very hard to win games. Today we knew Burnley are a team that fights a lot, run a lot and every ball they are ready to challenge.

"The team played in a very good way and we fully deserved the victory. I am pleased for that. It was a very difficult game."

Burnley boss Sean Dyche: "It is very cruel. We were very good today. A lot has been made of our away form but first half we were excellent and in the second we were at least decent against a top side."

Walker glad to be of assistance