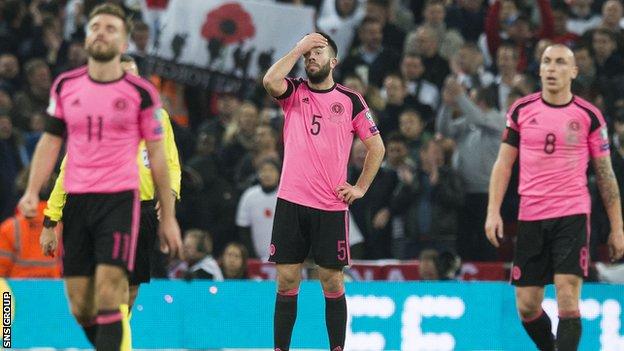 Scotland's World Cup qualifying hopes are close to be being snuffed out following a 3-0 loss to England at Wembley.

The second defeat in four games leaves Gordon Strachan's men fifth in Group F and the manager facing further questions about his future.

Former Scotland striker Steven Thompson gives his marks out of 10 for the display.

No chance with goals but had little else to do other than pick the ball out of his net.

A surprise choice but the Derby winger defended well considering he wasn't in his natural position.

Scotland's best player on the night after a long absence from the international scene. Offered a real threat going forward and worked tirelessly.

Played better than in Slovakia and unlucky at first goal after making a good block. Wasted a great chance to equalise, failing to hit the target from a free header.

Given a rare start and did well to keep England's danger men quiet for large periods.

The captain's desire and work rate are never in question but he was loose in possession too often.

Back from his short-lived international retirement but for how long? The Celtic captain gave the midfield energy and aggression as expected.

Largely ineffectual. Didn't get on the ball enough to make a positive impact. Again, a surprise inclusion given his lack of game time at West Brom.

Missed a glorious opportunity to level the game early in the second half, dragging a shot wide from near the penalty spot. Another player guilty of giving the ball away too often.

Provided some threatening set-pieces. Really should have scored not long after Forrest's miss when he had a good sight at goal.

Led the line well with positive energy in the first half. However, made a poor decision not to play in Snodgrass on a good counter-attack. Tired in the second half as Scotland meekly surrendered.

The game was over when he came on, very difficult to make an impression.

On for the injured Anya. Not given much to do since England were content to keep the ball and didn't pose much of a threat.

Too late to make an impact.