Lionel Messi scored a hat-trick as Barcelona punished 10-man Manchester City in the Champions League on Pep Guardiola's return to his old club.

City were competitive in the first half, but made far too many errors against a ruthless Barcelona revelling in Messi's return from injury.

A Fernandinho slip inside his own box put Messi clear for his first, then Kevin de Bruyne lost possession allowing Andres Iniesta to set up the Argentine for a left-footed strike into the bottom corner.

The evening got worse for the visitors when goalkeeper Claudio Bravo was sent off for handling outside the box and minutes later Messi struck again.

Barcelona were also reduced to 10 men in the last 15 minutes as substitute Jeremy Mathieu was shown a second yellow card for a foul on Raheem Sterling, but by then the damage had been done.

Willy Caballero saved a late Neymar penalty, but the Brazilian scored from open play minutes later to complete a comprehensive win for the La Liga side.

The victory maintained Barcelona's 100% start in Group C and extended their lead over City to five points.

It was the first time City had conceded four times in the competition and another miserable return to the Nou Camp for Guardiola.

During his celebrated four-year tenure as Barcelona manager the Catalan won 14 trophies, but he has now twice lost heavily to the Spaniards - the other defeat a 3-0 first-leg semi-final loss against Bayern Munich.

Messi's compatriot Sergio Aguero was only named on the substitutes' bench for City as Guardiola chose De Bruyne in the 'false nine' position, with Sterling, David Silva and Nolito in support.

If it was a surprising decision, the tactics were largely effective in the first half as City, crowding the midfield and pressing high, proved Barcelona's equal in terms of possession and passes and were undone by the sort of mistake it is impossible to protect against.

The visitors had chances of their own too. Nolito forced keeper Marc-Andre ter Stegen into action, while John Stones should have headed home a wonderful Silva free-kick.

But City's fate was sealed before the hour when Bravo clumsily passed to Luis Suarez and, despite being outside the box, instinctively saved the striker's chip, leaving referee Milorad Mazic with little option but to send him off.

To add to City's woes, Pablo Zabaleta was forced from the field, the captain injured in the build-up to Bravo's sending-off and replaced by Gael Clichy. City reverted to a three-man defence, but more goals followed.

Messi back and scoring again 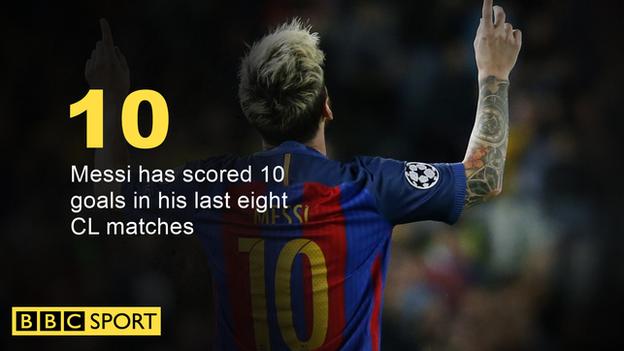 Barcelona had yet to hit the heights of last season this term, but one reason for that was the recent absence of Messi with a groin injury.

The Argentine scored within three minutes of his La Liga return at the weekend, and in front of his old boss proved again what a magical player he is.

He ruthlessly took advantage of Fernandinho's slip and revelled in the space created by Bravo's sending-off. He scored from three of his four shots and also created chances for others.

It was Messi's weaving run that forced a panicked Aleksandar Kolarov to concede the penalty and then the Argentine put Neymar through for Barca's fourth.

206 comments
Back to top
unknown