Inter Milan fans have called for leading scorer Mauro Icardi to be stripped of the captaincy following a heated row with the Argentina forward.

Inter's hardcore 'ultras' called Icardi a "clown" before Sunday's 2-1 home loss to Cagliari - and cheered when he missed a penalty during the match.

Icardi, 23, had criticised the fans in a recently published autobiography.

Club president and ex-captain Javier Zanetti said: "We cannot accept this kind of behaviour from an employee."

Icardi, who claimed in his book he had been "hailed as a hero" in the dressing room for challenging a section of supporters after a defeat at Sassuolo in February 2015, had attempted to diffuse the situation with a social media post before the game against Cagliari.

But fans jeered him and displayed a banner criticising the player, who had scored six goals this season but missed from the spot with the score at 0-0 before Cagliari went on to secure their first away win since securing promotion back to Serie A last season. 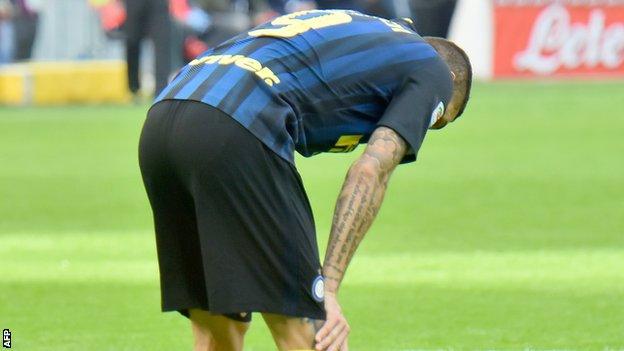 The result also added to the pressure on manager Frank de Boer, who has seen his side win only one home game - against champions Juventus - since being appointed in the summer.

Inter went ahead 11 minutes into the second half when Joao Mario scored his first goal for the club, forcing the ball home after his initial shot had been saved.

But the hosts then went on the defensive and Cagliari equalised through Federico Melchiorri's close-range finish after 71 minutes.

Melchiorri then forced an error from Inter goalkeeper Samir Handanovic, who fumbled the ball into his own net five minutes from time.

After the match, Inter's first home league defeat of the season, De Boer said: "On another day Icardi would have scored from the spot. I don't want to discuss the rest of it.

"We will assess things tomorrow out of respect for the fans and the player. We must find a solution, because the situation is far from ideal."