He accepts the aim, which requires four promotions, needs outside investment.

As Salford revealed plans to increase their Moor Lane ground capacity to 5,108, Scholes said: "You sense something big is happening and we want to take it as far as we possibly can."

The work at Moor Lane will start this winter, once planning permission has been secured.

Supporters and local residents have already given their blessing to the plans, which include renovation of all four sides of the stadium, and stands down both sides that will accommodate 2,000 supporters.

In addition, there will be a fan area on the Neville Road side of the ground, where the dressing rooms are located.

It is a long way from the club Scholes and his co-owners inherited when they completed their takeover in 2014.

Since then, they have been promoted twice, reached the second round of the FA Cup for the first time and been the subject of a BBC documentary, the second series of which was broadcast last month.

The profile Salford have gained through their famous owners has brought jealousy from some of their rivals, and unease from a minority of their own club's support, who were happy with their lot, languishing in the lower reaches of the Northern Premier League.

"In the last two years we have won the league and gone up through the play-offs. The crowd is on the pitch, loving it.

"There has to be a purpose to a football club. The purpose is to go as far as we possibly can.

"I went to Stockport on Saturday. There must have been 500 away fans there. You don't see that in the Football League.

But, he said, the club will not be able to achieve its goals on its own.

"We will need investment," he said.

"This is nothing bad against FC United because it is the way they have done it but they won't take outside investment. They have a lovely ground and they have probably got a budget that won't allow them to get out of this league.

Why did he buy a football club?

Well, it was not for the money.

"We are not doing it for a return on our investment," Scholes said.

"We want to build a good football club, with a reserve team and youth team and have kids coming through from the age of 10 to the first team. We are desperate for that to happen. That would give us greater satisfaction than making a few quid."

He says what he likes most of all about his club is the "honesty" of it.

"I enjoy watching honest people who want to put an honest shift in, at what is a decent standard," he explained.

But there are also frustrations.

"The thing that annoys us the most is when people or players from other clubs are saying we are paying £1,000 a week or £850 a week [to players]," he said.

"It is just not true. Our budget is probably the fourth of fifth highest. It makes it difficult to sign players. We are not going to pay stupid money."

Scholes underlined the need to continue investing, to attract the best players possible and then one day go full-time.

"I don't see the point in getting to this level and stalling," he said. "But it will be difficult. I always felt this level would be a big step up from the last two years."

Following promotion to the National League North - the sixth tier of English football - in April, Salford have made a good start to the season and sit seventh in the table.

However, they have now gone six matches without a win, which is the worst run since Scholes and his partners took over.

"We are having a sticky spell but we expected this," he said. "You can't win all the time. It is impossible."

"We couldn't be happier with our two managers [Anthony Johnson and Bernard Morley]. They have been brilliant for two years and we made a fantastic start this season."

He says the owners want to give the community a club to be proud of.

"In months to come we hope to have an academy," he said. "We are giving young players who maybe get released from [Manchester] United or City or other bigger clubs, who have nowhere to go, a bit of light at the end of the tunnel.

"When you see those plans, it excites you. From what we have now to what we could possibly have in six months' time. It is an exciting time." 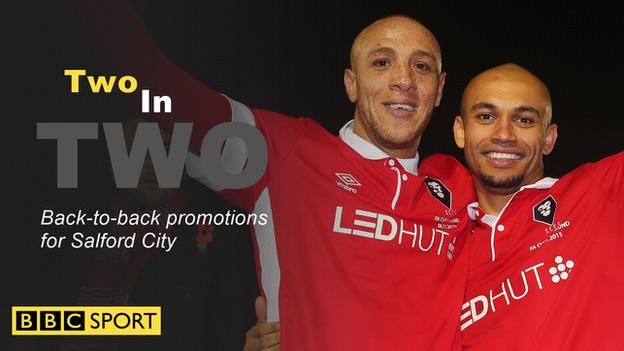