There is no place for captain Wayne Rooney in England's starting XI, but his 18-year-old Manchester United team-mate Marcus Rashford should start up front, according to BBC users.

Readers were asked on Wednesday to select who they thought should start in a first-choice England XI.

Despite not starting any of England's first three World Cup qualifiers so far, 59% of users selected Rashford in their starting XI, compared to just 19% for Rooney. Tottenham's Harry Kane was selected to play alongside Rashford.

Manchester City centre-back John Stones did not make the starting XI when we asked readers to pick their first-choice XI in May - but he was the most popular choice this time with 78% of submitted formations including him.

Interim manager Gareth Southgate made Jordan Henderson his captain after dropping Rooney for Tuesday's goalless draw against Slovenia - but the Liverpool skipper did not make it into your team.

The most popular England starting XI 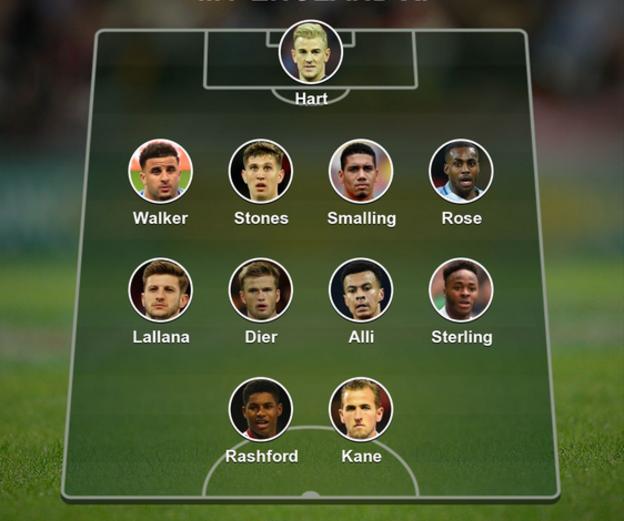 Rashford's selection as your number one forward above the likes of Tottenham's Kane, Leicester City's Jamie Vardy and Liverpool's Daniel Sturridge is a sign of the impact he has had for both club and country since his emergence earlier this year.

Rooney, 30, said before the Slovenia match that he is in a "difficult period".

Rooney is his country's top-scorer and has made the most outfield appearances with 53 goals in 118 games, was picked more often as a midfielder than a striker, but is still only the 18th most selected player overall. Back in May, Rooney did make the starting XI - selected as a midfielder.

Six months is an awfully long time in football.

Before the European Championships in May you picked Chris Smalling and Gary Cahill as the number one partnership in the centre of defence, with John Stones struggling for form at Everton.

However, with Stones now under Pep Guardiola's tutelage at Manchester City, the 22-year-old not only finds himself in your team, but the most selected player overall.

A massive 78% of you want him at the heart of your defence, with Smalling pulling in 61% and Cahill, who won his 50th cap on Tuesday, falling to 35%.

The 29-year-old said he was "gutted" by a "difficult summer" that saw his place in the England team questioned after mistakes during Euro 2016.

Things went from bad to worse for Hart when Guardiola arrived at the Etihad Stadium, with the Spaniard deciding he wanted something different in his goalkeeper, signing Claudio Bravo from Barcelona and making the Englishman available for loan.

However, a switch to Serie A side Torino and a magnificent performance against Slovenia on Tuesday have persuaded you that he's still the man for England, with 69% selecting him between the sticks.

Who do you think should be in the England team? Pick your XI - and then share it with your friends.