It was the first time Jeffrey had come up against Linfield since taking over at Ballymena in March.

Carrick Rangers went through by winning at Armagh City and Warrenpoint overcame Ards after extra-time.

The win for Ballymena will capture the headlines because of manager Jeffrey but United pair Johnny McMurray and Cathair Friel deserve their share of the spotlight for some superb goals.

After Jimmy Callacher had given Linfield the lead, McMurray ran through to fire a fine finish past keeper Roy Carroll.

Friel's superb strike put Ballymena into the lead and things got worse for Linfield when Ross Gaynor was sent off. He received a second yellow card from referee Raymond Crangle for diving.

McMurray then got his second of the night with a brilliant lob and Willie Faulkner snapped up a fourth for Ballymena.

Premiership champions and leaders Crusaders looked to be in trouble at Portadown as they trailed 3-2.

Aaron Haire had earlier netted twice for the Ports with Stephen Hughes making it 3-1.

Daniel Hughes scored two and Stephen Garrett got the sixth for the visitors to the Tandragee Road.

Premiership strugglers Carrick got a much-needed win with goals by Stephen McCullough and TJ Murray earning a 2-0 win away to Armagh City. 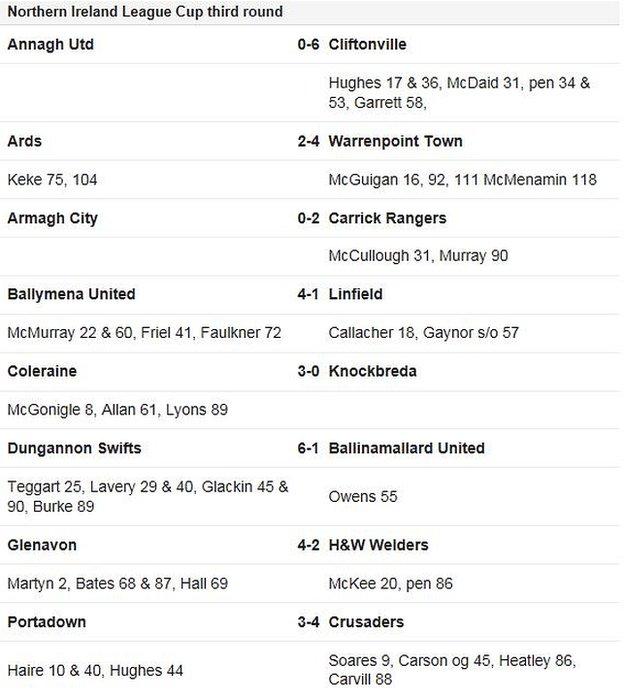