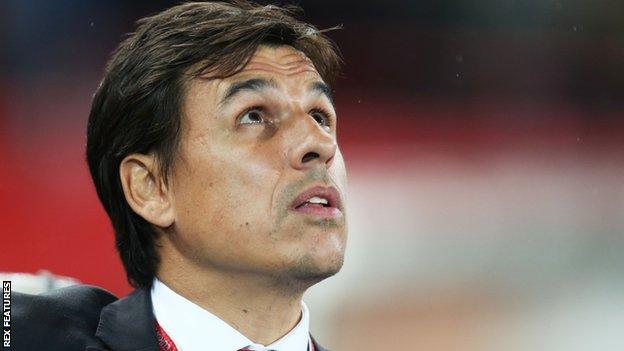 Wales boss Chris Coleman says he was proud of his side's "courage" in the 2-2 World Cup qualifying draw in Austria despite a below-par performance.

Wales led twice in Vienna, but defensive mistakes allowed the hosts to salvage a point.

Coleman's side remain top of Group D before their third match of the campaign at home to Georgia on Sunday.

"We didn't play well tonight, but we still found a way to hold on to something," said Coleman.

"I think it's a point gained - it wasn't our best performance.

"In terms of quality with the ball, we gave away a lot of possession, we made a lot of mistakes and we looked indecisive, which is not something you can say about this team on too many occasions."

This game was seen as potentially Wales' toughest fixture of the campaign, with Coleman's top seeds away from home against the second-highest ranked team in the group.

Austria were defending an unbeaten home record in competitive matches that stretched back to 2012, and they were backed by a packed and raucous Ernst Happel Stadion.

"Austria will pick a lot of points up in this campaign. I think whoever finishes above Austria will qualify," said Coleman.

"They're not unbeatable. It's a tough group. For us to come here and not bring our 'A-game' and still get a point, that says a lot about the team and their team spirit and courage."

The build-up to the match was dominated by an exchange of views between Coleman and his counterpart Marcel Koller.

The Austria manager said Wales were "lucky" to reach the Euro 2016 semi-finals, a claim Coleman rejected before suggesting teams such as Austria did not perform as well as Wales because they "couldn't handle the pressure" of the tournament in France.

However, Coleman could see the funny side when Wales scored a fortunate second goal in Vienna as the ball ricocheted off Austria defender Kevin Wimmer and into the hosts' net.

"I think it's fate," said Coleman, before adding: "You could say their second equaliser was lucky."